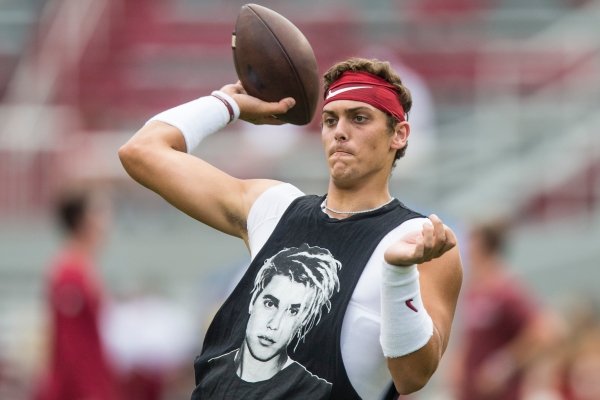 Justin Bieber says he's disappointed in Razorback football player Nick Starkel — and not, it seems, because of the quarterback's 5-interception performance in a loss to San Jose State on Saturday.

Starkel, who wears Justin Bieber T-shirts during warmups, took to his Twitter account Sunday morning and announced that the shirt featuring the pop singer "has been ripped in half and thrown away."

"No more nonsense," Starkel wrote. "No more distractions. All I'm focusing on is this team and this season. Nothing else."

Later Sunday, Bieber responded on his Instagram story — a feed of updates on an account that boasts more than 119 million followers.

"I'm disappointed @nick.starkel," Bieber wrote alongside a screenshot of the quarterback's tweet about the shirt and a sad emoji.

Starkel then responded on his own Instagram story feed, posting Bieber's response and adding a pair of sad emojis of his own.

In the 31-24 loss, Starkel passed for 356 yards on 28 of 50 completions and threw 3 touchdown passes along with the five interceptions.