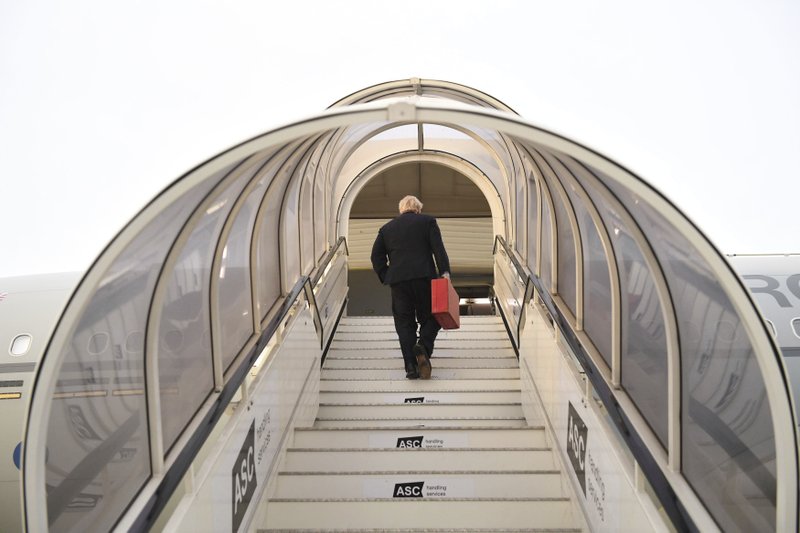 UNITED NATIONS -- Britain, France and Germany joined the United States on Monday in blaming Iran for attack on key oil facilities in Saudi Arabia, and the British prime minister said the U.K. was open to a military response.

The Iranian foreign minister, however, pointed to Yemeni rebels' claim of responsibility for the Sept. 14 attack, adding, "If Iran were behind this attack, nothing would have been left of this refinery."

The leaders of the United Kingdom, France and Germany released a statement reaffirming their support for the 2015 Iran nuclear deal, which the U.S. exited, but telling Iran to stop breaching it and saying "there is no other plausible explanation" than that "Iran bears responsibility for this attack."

They pledged to try to ease tensions in the Middle East and urged Iran to "refrain from choosing provocation and escalation."

British Prime Minister Boris Johnson, one of the world leaders gathering this week for their annual meeting at the U.N. General Assembly, said late Sunday while flying to New York that the U.K. would consider taking part in a U.S.-led military effort to bolster Saudi Arabia's defenses after the drone and cruise missile attack on the world's largest oil processor and an oil field.

"How do we respond to what the Iranians plainly did?" Johnson asked, assigning blame for the attack. "What the U.K. is doing is trying to bring people together and de-escalate tensions."

Iran's foreign minister, Mohammad Javad Zarif, denied that Iran had any part in the attack. He said Monday that Yemen's Houthi rebels, who claimed responsibility, "have every reason to retaliate" for the Saudi-led coalition's aerial attacks on their country.

He also stressed that just days before President Hassan Rouhani's visit to the U.N. in New York City, "it would be stupid for Iran to engage in such activity."

Zarif called it an attack "with high precision, low impact" and no casualties. In the refinery, there were facilities that would have taken the Saudis a year to repair, he said.

"Why did they hit the lowest impact places?" Zarif asked, saying that if Iran was responsible, the refinery would have been destroyed.

The Yemeni rebels are backed by Tehran, however, and they have been fighting a Saudi-led coalition for four years.

France has been trying to find a diplomatic solution to U.S.-Iranian tensions, which soared after the Saudi attack, and has avoided assigning blame.

Earlier on his way to New York, French President Emmanuel Macron said he remained "cautious" about attributing responsibility for the attack. There was no immediate explanation of why his government later signed on to the statement blaming Iran.

Macron said Monday that he had a quick talk with Trump on the sidelines of a U.N. General Assembly meeting about climate change, and that he planned to see Trump again today. The White House has not confirmed any meeting with the French president.

The French president said he also planned to meet with Rouhani over the next day and would work to foster "the conditions for discussion" and not escalation.

Macron called the Sept. 14 strikes "a game-changer, clearly" but reiterated France's willingness to mediate between the two countries.

Zarif, however, ruled out any Iran-U.S. meeting. He said Iran had received no request from the U.S., "and we have made clear that a request alone will not do the job."

He said Trump "closed the door to negotiations" with the latest U.S. sanctions, which labeled the country's central bank a "global terrorist" institution -- a designation the Iranian minister said the U.S. president and his successors may not be able to change.

"I know that President Trump did not want to do that. I know he must have been misinformed," Zarif said in a meeting with U.N. correspondents.

Zarif said he plans to meet Wednesday with ministers of all five countries remaining in the 2015 nuclear deal: China, Russia, France, Germany and the U.K.

Johnson, the U.K. prime minister, said Britain still backs the existing nuclear agreement and wants Iran to stick to its terms, but he also said it's time to strike a new nuclear deal with Iran.

"Whatever your objections to the old nuclear deal with Iran, it's time now to move forward and do a new deal," Johnson told Sky News on Monday in New York.

After Trump quit the nuclear deal with Iran last year, the five remaining nations have failed to find a way to sidestep increasingly tough U.S. economic sanctions on the Islamic Republic, and Iran has begun to breach the accord's limits on its nuclear program.

Trump has vowed to seek a more stringent accord that would bar Iran permanently from the capability to develop nuclear weapons while also curbing its ballistic missile program and its support for groups such as Hezbollah that the U.S. considers terrorists.

Asked about Johnson's comments, Trump told reporters, "I respect Boris a lot, and I'm not at all surprised he was the first one to come out and see that." He said Johnson is "a man who, No. 1, he's a friend of mine, and No. 2, he's very smart, very tough."

Trump added that he believes the 2015 agreement expires too soon.

Elsewhere, Iran's Rouhani said on state television that his country will invite Persian Gulf nations to join an Iranian-led coalition "to guarantee the region's security."

Shortly before leaving for the U.N. meetings Monday, Rouhani said the plan also encompasses economic cooperation and an initiative for "long term" peace. He planned on presenting details while at the United Nations.

Zarif said the new Hormuz Peace Initiative would be formed under a U.N. umbrella with two underlying principles: nonaggression and noninterference. He said it would require a major shift from countries "buying" security from other nations or mercenaries and instead promote the notion that "you can gain security relying on your own people and working with your neighbors."

Johnson said he would meet Rouhani at this week's U.N. gathering. He said he wanted Britain to be "a bridge between our European friends and the Americans when it comes to the crisis in the Gulf."

Information for this article was contributed by Edith M. Lederer, Jill Lawless, Jennifer Peltz, Nasser Karimi and Jon Gambrell of The Associated Press; and by Robert Hutton and Gregory Viscusi of Bloomberg News.