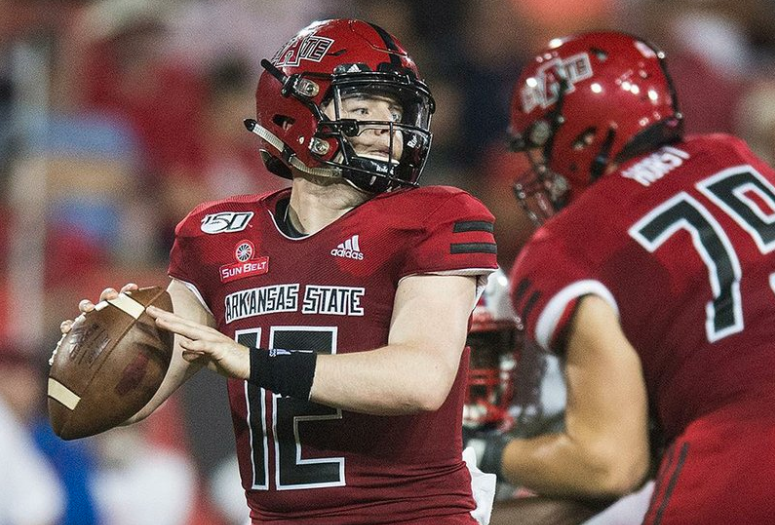 Arkansas State quarterback Logan Bonner’s status is uncertain as he deals with an injury to his throwing hand. He is set to see a specialist Wednesday. ( Jeff Gammons)

JONESBORO -- The concerns are mounting by the week for the Arkansas State University football team.

Junior cornerback Jerry Jacobs was lost for the season last week with a torn ACL. On Saturday, despite a 41-28 victory in Jonesboro, the Red Wolves' defense showed there's much work to be done after giving up 526 yards of offense to FCS Southern Illinois, which was missing its starting quarterback.

After Monday, add quarterback health and the loss of a key running back to the growing list of issues plaguing ASU (2-2) as the Sun Belt Conference opener against Troy (2-1) approaches.

Anderson revealed that junior quarterback Logan Bonner has been dealing with an injury to his throwing hand. Anderson said Bonner first hurt it during the season opener against SMU, but he stayed in the game and has played every week since.

The issue with Bonner's right hand seems to have reached a head after Saturday's game. Bonner was seen at one point bending over and grabbing it after a hit. After the game, he had his hand wrapped in ice as he addressed the media.

"It's good," he said when asked about it.

Anderson said Monday that Bonner will not throw today and will see a specialist Wednesday. His status is uncertain.

"Just every week, he has hit it again. He's been battling it. It hurt to clap last week in practice," Anderson said. "He's had it braced up every week just to kind of keep the pressure off of it, but he's been able to get ready to throw, and he's thrown really, really well with it.

"But it's been extremely sore. Having it get hit again the other night and be as sore as it is now, we got to get some rest on it, or there's no way he's gonna make it."

It's troubling news for an ASU offense that has benefitted from Bonner connecting on big play after big play in the passing game. He's thrown for 1,052 yards, 10 touchdowns, 1 interception, and he is completing 59.5% of his passes through four games.

"If he can keep playing at the level he's playing with like [his hand] is, then that's what he's gonna do," Anderson said. "Now at one point can't he do [it], I don't know. Somewhere along the way, he's got to quit getting it hit."

Anderson also announced that junior running back Ryan Graham is done for the year after suffering a torn ACL against SIU. With sophomore Marcel Murray's nagging ankle injury limiting him this year, Graham -- a junior-college transfer from California -- had been relied upon significantly and was the only ASU running back to have logged a rushing touchdown so far. He tallied 134 yards and 2 touchdowns on 23 carries.

"He was playing at a high level," Anderson said. "We're gonna miss him."

Anderson said Murray remains day-to-day. After missing the Georgia game, he played the first snap Saturday before being pulled because of discomfort with his ankle.

With Graham out and Murray questionable for the Troy game, freshman Isaiah Azubuike and junior DJ Chatman are set to have increased roles. Azubuike rushed 15 times for 88 yards against SIU.

"I don't know that it's gonna be dramatically better by Saturday, but [Marcel] got better in a hurry last week," Anderson said. "I don't know what percentage he's at now, but he's getting closer to being on the field than he was a week ago."

Elsewhere, senior defensive tackle Kevin Thurmon broke his hand and is expected to miss two to four weeks. Senior wide receiver Dahu Green (knee), junior center Jacob Still (wear and tear) and junior cornerback Demari Medley (hamstring), who each missed the SIU game, are still working to get back to 100%.

The biggest issue is Bonner's health. The Red Wolves could have to turn to either redshirt freshman Layne Hatcher or senior Carson Coats come Saturday.

The injuries on offense coupled with the defensive concerns have raised red flags as ASU gets set to face a Troy team that's had no problems moving the ball and scoring points this season.

On Saturday against SIU, the Red Wolves struggled to stop the Salukis' offense from going up and down the field. After the game, Anderson called it a "frustrating" performance.

"We didn't play with confidence," defensive coordinator David Duggan said Monday. "When you watch the film, we played on our heels. We didn't play physical, and that's a direct reflection on me. I got to figure out a way to get these guys playing with confidence and attacking the ball a little bit better this week."