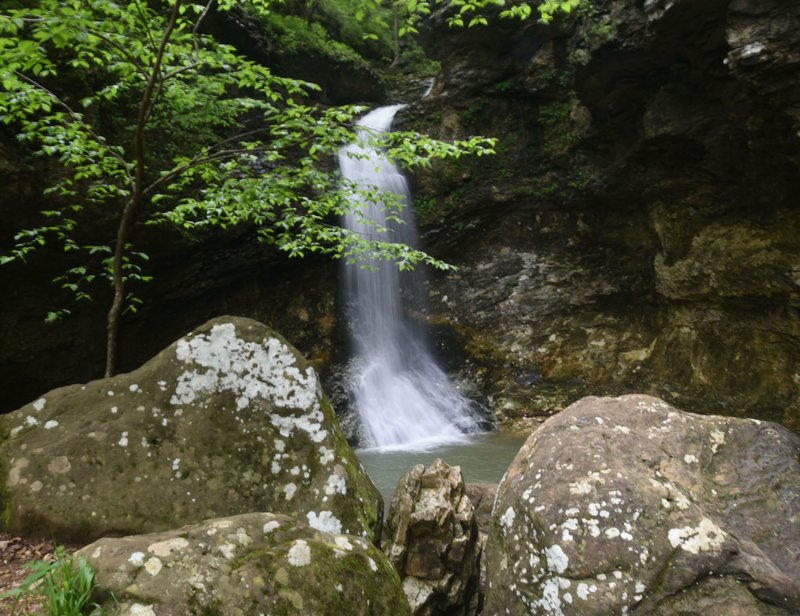 Eden Falls flows on May 3, 2019 at Lost Valley near the Buffalo National River west of Ponca.

Private funds and a planned contribution from Hutchinson's discretionary funds will go toward the projects. The Nature Conservancy and the Buffalo River Foundation have collectively pledged $1 million toward the new Buffalo River Conservation Committee.

Buffalo River Foundation Executive Director Ross Noland said the funding from each nonprofit organization has not been determined. The groups will together fund conservation projects worth a total of $1 million, and their contributions would be figured once projects are approved, Noland said.

Hutchinson also intends to use $1 million from his discretionary fund toward the committee, pending legislative approval.

The new endeavor is the latest from the governor's office regarding the Buffalo River, which has been the subject of heated political debate in recent years on how best to protect it. The major issue has been the existence of C&H Hog Farms, which was permitted in 2013 under Gov. Mike Beebe's administration to house 6,503 swine on land that abuts Big Creek, 6.6 miles from where it runs into the Buffalo River.

Hutchinson announced a $6.2 million buyout of C&H in June, with most of the funds coming from the state and some money coming from The Nature Conservancy.

After being paid in August, the farm's owners have started to sell the hogs, Hutchinson said.

"We still want to have a long-term effort to make sure the Buffalo River is pristine for generations to come," he said.

The announcement was met positively.

"Protecting this watershed is vital for the ability of Arkansans to enjoy this beautiful free-flowing resource," U.S. Rep. French Hill, R-Ark., said in a statement issued Monday.

Committee members include the secretaries or designees of the departments of agriculture; energy and environment; parks, heritage and tourism; and health.

The Nature Conservancy, the Buffalo River Foundation and the committee will ideally find ways to combine their unique missions on conservation projects, Noland said.

"That's when you make a difference," he said.

The Buffalo River Foundation is a private land trust and works on conservation easements and targeted land acquisitions. Easements limit the use of land. Its money would be limited to that mission, Noland said.

He said the foundation is glad to see emphasis from state government placed on protecting the Buffalo.

That committee is required to hold quarterly meetings but has met only once in 2019.

The Department of Energy and Environment said the action committee met in June and remains active.