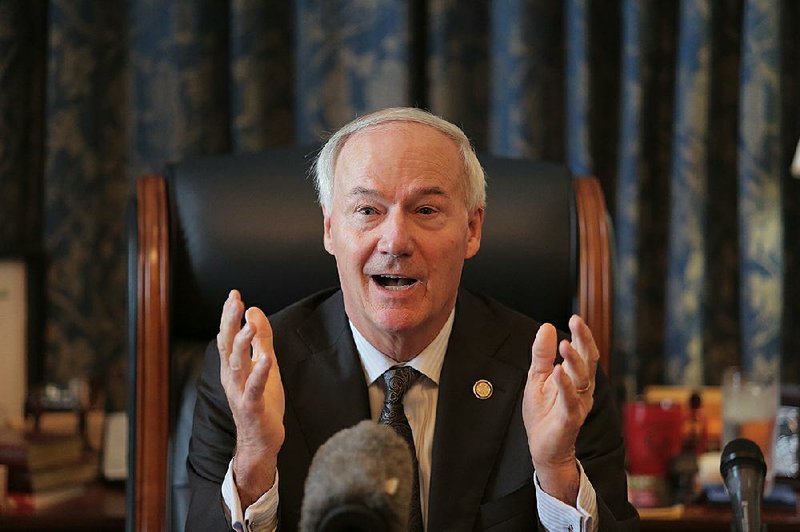 Gov. Asa Hutchinson shared his thoughts about the Little Rock School District and discussed the Buffalo National River with reporters in his office Monday.

The state has a legal and moral obligation to continue some oversight of the Little Rock School District, Gov. Asa Hutchinson said Monday while also rejecting criticism that the state Board of Education's framework for the district's future is tantamount to resegregation.

Outside Hutchinson's office, a small group of parents and legislators said the Republican governor was ignoring the reality of the state board's plan to return some district schools to the control of an elected school board, but not all of them.

The board is facing a deadline early next year because it must take action on the school district five years after taking it under state control in 2015.

Under the framework announced Friday, the Little Rock School District would be reconstituted if it doesn't meet the state's exit criteria by the end of January. Schools that performed satisfactorily would return to limited local control, while the lowest-performing schools would remain under state control.

Historically, those low-rated schools, with one exception, are located south of Interstate 630 in areas of the city composed predominantly of members of minority groups.

Hutchinson praised the board's framework because it would restore some local control to a majority of the schools in the 23,000-student district. He said the framework wasn't based on geography but on school performance.

[Video not showing up above? Click here to watch » https://www.youtube.com/watch?v=ns0MNSa_cb4]

"I absolutely reject the proposition that this is a resegregation of the Little Rock School District," he said during a Monday morning meeting with reporters. "That is wrong. It is not based in fact, and it is really trying to resurrect old history that has no application to today."

The state Board of Education assumed control of the Little Rock School District in 2015, dismissing the School Board because six of the district's 48 schools at the time were labeled academically distressed as a result of chronically low test scores on math and English/language arts exams.

The Board of Education has been wrestling in recent months with how to handle the district's future if it fails later this year to meet the set criteria to return fully to the control of a local board. The exit criteria were announced earlier this year and are based mostly on standardized test results. It could be as late as Oct. 15 before the state determines whether the district has met the exit criteria.

The details of the framework approved by the state board on Friday are still being developed, but the plan is that the district would be subdivided into three categories for the purpose of determining who controls each school.

• Category 1 schools would be those with a 2019 state letter grade of D or better, and they would be operated by a nine-member school board set to be elected in November 2020.

• Category 2 schools would be those that are undergoing reconfiguration as determined by the state Board of Education.

• Category 3 schools would be those with an F letter grade for 2019 (eight schools received such a grade in 2018). Those schools would operate under "different leadership than the remaining schools in the district, but in partnership with the district," according to the framework plan.

State Education Secretary Johnny Key said last week that the locally elected board may make transportation and food service decisions for the Category 3 schools while the state Department of Education handles curriculum and personnel decisions.

Two mothers and two state senators said the way Category 3 schools would be treated under the state Education Board's proposal was problematic because it would likely result in largely minority-group schools in poor areas being treated differently from schools in more affluent areas of the city.

Vicki Hatter, a mother who has a child who graduated from the Little Rock School District and another currently enrolled, and Ali Noland, whose daughter attends Pulaski Heights Elementary, tried to get into Hutchinson's meeting with reporters on Monday, but they were turned away because they weren't members of the press.

They expressed frustration with the entire process of the state's takeover of the district, but Noland said they want to work with the state to come up with "an outcome that treats everyone the same."

Hatter said there has been strong community, parent and teacher involvement from the Little Rock district in recent years.

Hutchinson, citing Article 14 of the Arkansas Constitution and the landmark Arkansas Supreme Court decision in Lake View School District No. 25 v. Huckabee, said the state has the "absolute duty" to ensure all public school students have an equal opportunity for an adequate education. Therefore, the state can't just remove itself from the Little Rock School District if exit criteria aren't met, he said.

"If the state ignored the academic performance measures and returned all schools without sufficient support, then we would surely have dedicated civil-rights lawyers that would be immediately filing lawsuits saying we're not meeting our obligations under the Lake View decision," Hutchinson said.

State Sen. Linda Chesterfield, D-Little Rock, noted that outside the Little Rock School District, 36 schools received F grades in the 2018 school accountability scores, but not all of those schools' districts have lost their local school boards to state control.

"Once again, outsiders coming in and telling us what's best for us," she said.

Hutchinson was asked if the state should take over districts with F-rated schools since it was determined that F-rated schools in Little Rock shouldn't be returned to local control.

"It means the state has a responsibility," Hutchinson said. "It has to determine the right approach, and you can list a number of different school districts across the state that have been taken over or reconstituted by the state Board of Education for the reasons just like the Little Rock School District.

Hutchinson declined to state his position on a proposal before the Board of Education to end recognition of the Little Rock School District's teachers union, but he said it may become appropriate to share his position at some point.

Education Board member Sarah Moore, a former Hutchinson aide, moved Friday to end recognition of the Little Rock Education Association, calling instead for the establishment of a personnel policies committee in the district resembling the committees required for other schools in the state.

State law had exempted the Little Rock district from having a personnel policies committee because the district engaged in collective bargaining, but that exception was eliminated earlier this year by Act 728.

Moore's motion last week surprised and angered union teachers. About 70% of the district's educators are members of the Little Rock Education Association. District Superintendent Mike Poore, who reports to the state secretary of education, opposed the proposed dissolution of the union last week.

Hutchinson did say that he thought a committee provided faculty and staff members with sufficient influence on a district's personnel policies.

"Obviously, a union can provide that influence as well, but it's a negotiated contract so it's different," he said. "I think you have to look at what is best for the future of the Little Rock School District and the students and to improve education here."

The decision, Hutchinson said, ultimately rests with Key, the education secretary, with input from the state board.

Hutchinson closed his briefing by saying that everyone could look back over the past five years and find things they wish would've gone better, but that everyone was working hard, particularly teachers.

"I think you have to look at the future at this point," he said. "And the future is that we can do this better together and have better results for the students versus dividing and saying: 'This is a state responsibility. This is local control.'

"Let's work together to have a better outcome for the students. Let's learn from the past and apply it to the future."