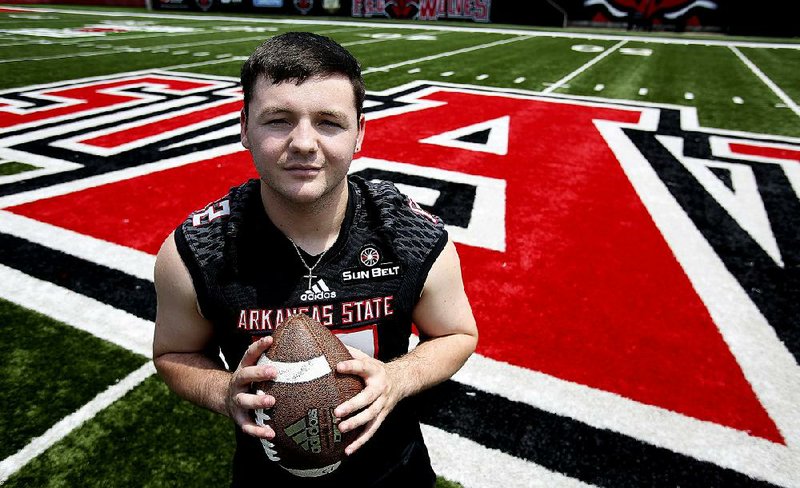 Arkansas State University junior starting quarterback Logan Bonner is out for the rest of the season after undergoing thumb surgery on his right throwing hand on Wednesday.

Bonner took to Twitter on Wednesday night to make the announcement.

"It pains me to even say this, but my 2019 season has come to an end. Surgery was needed to fix my thumb," Bonner tweeted. "I tried to play through this injury for as long as I could for these last four games. As much as I want to go out there to battle with my brothers, I physically can't go anymore.

"It's been a long three years of waiting to lead this team, but I now have a different role as a leader and that is do anything and everything I can to help the quarterbacks and the offense be as successful as we are capable of being. I love these guys and the staff more than they will ever know. I WILL be back better than ever. I love this team, school, and fans and all the support I have gotten. Thank you for giving a Texas kid a chance to lead this team this year. See y'all [in] 2020."

ASU Coach Blake Anderson said Wednesday that an MRI revealed the ligament in Bonner's thumb on his throwing hand was "completely torn." Bonner is expected to begin throwing again in the spring.

"We were hoping for the best and knew that there was a potential that it could be torn," Anderson said. "He went to Memphis today. They had a slot ready for him in case it was torn, and it was."

The Red Wolves have now lost three key players for the season due to injury in the span of a week.

Last Wednesday, Anderson announced that junior cornerback Jerry Jacobs was done for the year with a torn ACL, which he suffered against Georgia on Sept. 14. Junior running back Ryan Graham also suffered a torn ACL on Saturday against Southern Illinois and is out for the year, which Anderson revealed Monday.

Hatcher, a 6-0, 210-pound Pulaski Academy graduate, saw brief action late in the Georgia game a couple weeks ago. He completed 3 of 5 passes for 53 yards and an interception against the Bulldogs.

"[Hatcher] doesn't look like a guy that's afraid of the moment," Anderson said Wednesday. "He's prepared. He earned the team's respect over the summer with how he came in and worked. Nobody, even Bonner, didn't out-work him. ... They believe that the guy's put in the time, and he looks like a guy that's ready for the challenge. He's just got to go out and play in a live setting and do that."

All of that had been accomplished with a throwing hand that was never really fully healthy.

Anderson revealed Monday that Bonner first suffered the injury to his right hand during the Red Wolves' season-opening loss to SMU in Jonesboro. Bonner, though, stayed in the game and had been able to play through the injury in each game since, although he had experienced significant discomfort.

"Just every week, he has hit it again. He's been battling it. It hurt to clap last week in practice," Anderson said Monday. "He's had it braced up every week just to kind of keep the pressure off of it, but he's been able to get ready to throw, and he's thrown really, really well with it. But it's been extremely sore."

Saturday during ASU's 41-28 victory over Southern Illinois in Jonesboro, it appeared Bonner had agitated the injury even more. He was seen during the game after a hit grabbing his right hand in pain. Bonner showed up to his postgame media session with his hand wrapped in ice.

"It's good," he said mildly when asked about it.

Anderson had said Bonner would see a specialist on Wednesday. That meeting ended up confirming the worst about his injury.

Prior to this season, Bonner, a Rowlett, Texas, native, was mostly an unknown. The redshirt junior had sat behind star Justice Hansen for the past three seasons at ASU and had only played sparsely.

Because Bonner played in only four games this season -- the maximum allowed for a redshirt year, per NCAA rules -- he will still have two years of eligibility remaining.