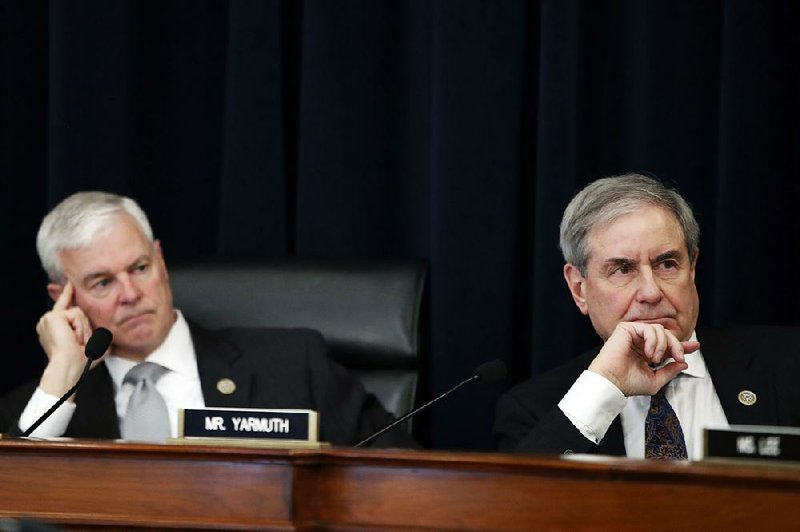 WASHINGTON -- As a share of the overall economy, U.S. infrastructure spending is lower than it has been at any time since 1956, House Budget Committee Chairman John Yarmuth, D-Ky., warned Wednesday.

"Current infrastructure gaps are anticipated to cost the United States $3.9 trillion in [gross domestic product] and 2.5 million jobs by 2025 due to lost productivity," he said. "Failing infrastructure will cause U.S. businesses to become less efficient, raising the cost of doing business and forcing those costs onto consumers."

"As we move forward in the 21st century, it is imperative that our infrastructure keep pace with the people and nation it supports," the former Rogers mayor said. "Thankfully, infrastructure has historically been a priority for both parties. The bipartisan spirit has served our country well -- and it will be important as we work to rebuild the system."

A panel of experts echoed concerns about the nation's failure to keep pace with its infrastructure challenges.

"The United States faces severe challenges in the funding, financing and permitting of its heavy civil and social infrastructure," said R. Richard Geddes, a Cornell University professor and director of the Cornell Program in Infrastructure Policy. "The main challenge the United States faces today is inadequate funding of infrastructure, which refers to the underlying dollars needing to pay for it. Declining revenue from the federal gas and diesel tax is devolving responsibility for funding to state and local governments by default."

"America has a long history of building some of the most impressive infrastructure systems in the world, and investing in these vital networks is part of what makes this country exceptional," she said. "Unfortunately, we're falling behind and have been for some years."

Since 2010, China has spent roughly 8% of its GDP on infrastructure. European countries, on average, dedicate roughly 5% of their GDP to infrastructure. In the U.S., the figure is roughly 2.4%, Omar added.

Republicans and Democrats agree that infrastructure spending must be a priority.

But with the nation already $22 trillion in debt and with annual deficits nearing $1 trillion, there's little agreement about how to pay for the fixes.

Womack told lawmakers that Arkansas is "a leader in innovative approaches to infrastructure." He cited the Bella Vista bypass as an example of cross-state cooperation and highlighted the Northwest Regional Airport as a regional partnership success story. He also pointed to Arkansas Gov. Asa Hutchinson's successful push to increase highway funding.

"The message is clear," he told his colleagues. "Infrastructure cannot be built and maintained without continued state and local investment."

"Let's make sure we're making investments not based on the status quo. Not simply repairing our roads and bridges as we always hear, but truly making smart, fact-based, business-savvy investment in 21st-century infrastructure after examining all alternatives on the table.

"Little Rock is 2.5 hours from Chicago, in all weather, with no delays and a nearly perfect safety record by high-speed rail at Chinese speeds," he said.

That's the kind of technology the U.S. should consider investing in, he added.

In an interview after the hearing, Womack predicted that the government would eventually turn to user fees to help bolster transportation systems.

In order to do that, officials would have to decide the appropriate fee levels and the proper collection models, he said.

"What is the best user fee? Is it baked in at the pump on gas? Or is it miles driven?" he asked. "We have to have that conversation."

Procrastination would be counterproductive, he warned.

"The longer we punt on these adult-level discussions, the worse this problem gets and the more drastic the solutions become," he added.