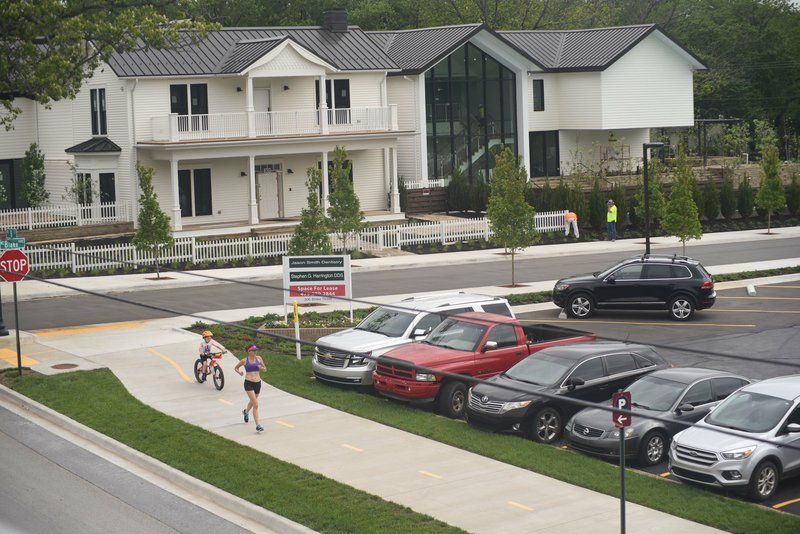 Arkansas, along with eight other states, saw an increase in the gap between high-income and low-income earners between 2017 and 2018, according to fresh U.S. Census data.

National and state policy experts weren't able to point to a specific reason for the widening gap, but said that, as Arkansas phases in its minimum-wage increase, the divide could narrow.

Alabama, California, Kansas, Nebraska, New Hampshire, New Mexico, Texas and Virginia were the other states that saw statistically significant increases. The nation as a whole also saw an increase in the gap, according to information from the Census Bureau.

"It seems like there's some troubling signs for Arkansans that are lower income," said Bruno Showers, a senior policy analyst with Arkansas Advocates for Children and Families.

The so-called wealth gap was part of the release Thursday of American Community Survey data by the Census Bureau. The bureau uses what is referred to as the Gini Index to show an inflation-adjusted measure of the gap between the highest-income and lowest-income earners.

The index is calculated using a mathematical formula developed by an Italian statistician in 1912. The result is expressed on a scale of zero to 1. A ranking of zero would represent perfect equality, with incomes equally distributed. A ranking of 1 would show complete inequality, with one household holding all the wealth.

The increase in income inequality comes as two Democratic presidential candidates, U.S. Sens. Bernie Sanders and Elizabeth Warren, are pitching a "wealth tax" on the nation's wealthiest people as a way to reduce wealth disparities, The Associated Press reported.

The expansion of income inequality last year took place at the same time median household income nationwide increased to almost $62,000, the highest ever measured by the American Community Survey. But the 0.8% increase in median income from 2017-18 was much smaller compared with increases in the previous three years, according to the bureau, the AP reported.

Even though household income increased, it was distributed unevenly, with the wealthiest helped possibly by a tax cut passed by Congress in 2017, the AP quoted University of Florida economist Hector Sandoval as saying.

"In 2018, the unemployment rate was already low, and the labor market was getting tight, resulting in higher wages. This can explain the increase in the median household income," Sandoval told the AP.

"However, the increase in the Gini Index shows that the distribution became more unequal. That is, top income earners got even larger increases in their income, and one of the reasons for that might well be the tax cut."

Showers said there are two pieces of state-level legislation that could narrow the gap in the short-term. The first is the increased minimum wage.

Arkansas voters approved a minimum-wage increase in 2018, which is still being phased in. The minimum wage was $8.50 in November when the vote was taken. It went up to $9.25 in January and is scheduled to be $11 by 2021.

"I think that that definitely will help, especially because we saw that a lot of minimum-wage workers were parents," Showers said. "I would think that as that [minimum-wage increase] phases in, that would definitely help."

At least 29 states and Washington, D.C., have such credits in place.

"If there's a silver bullet, I'd say that's the one," Showers said.

Senate President Pro Tempore Jim Hendren, R-Gravette, introduced Senate Bill 517 during the 2019 legislative session, which would have funded such credits through a higher tobacco tax.

The bill passed in the Senate and died when the Legislature adjourned.

Hendren said his bill had two goals -- to put the burden of paying for health care related to tobacco use on the users rather than the state and to provide relief to working families.

The issue came to his attention when he served on the Tax Reform Task Force. He proposed the law after he noted a high sales tax rate and the income taxes for people with lower incomes, among other issues, he said.

"When you factor all those things together, it became clear that our tax code was putting more of a burden on low- and moderate-income people than other states," Hendren said in an interview Thursday.

He added that he knew it was a controversial bill because some people think of it as welfare, but that the issue came to his attention during his work

"I don't consider a mom with three kids who's working, somebody that's necessarily out looking for a handout," he said.

Elizabeth McNichol, a senior fellow with the Center on Budget and Policy Priorities who specializes in state fiscal issues, agreed that a state-level earned income tax credit is one that helps decrease income gaps.

The Washington, D.C.-based center researches and advocates for policy that reduces poverty and inequality, according to its website.

She added that among the nine states that saw significant increases, there wasn't a clear pattern but that globalization and a decrease in manufacturing jobs have contributed to a higher income gap nationally.

"A lot of these factors are kind of out of control of the state," she said. "It's a national trend."

Information for this article was contributed by Mike Schneider of The Associated Press. 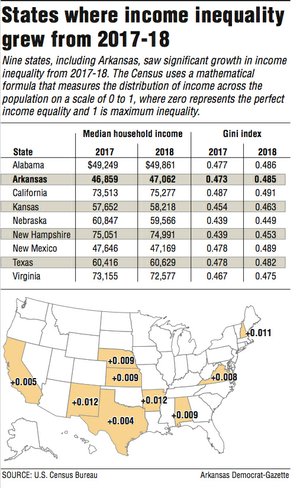