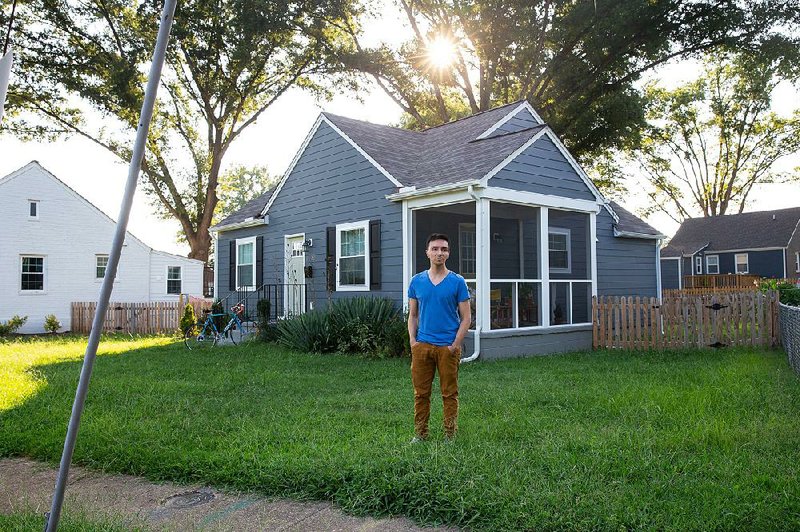 Jeisson Apolo Armas stands outside the house that he bought in 2018 through the Maggie Walker Community Land Trust in Chesterfield County, Virginia.

ATLANTA -- The crumbling neighborhoods of English Avenue and Vine City stand in stark contrast to the bustling downtown area less than two miles away that has become a tourist magnet with such attractions as CNN Center and World of Coca-Cola.

But the neighborhoods -- longtime home to a stable population of mostly minority, low-income residents -- soon may get a piece of the prosperity nearby. A national downtown revival trend is bringing interest from more affluent groups, including investors, to intown Atlanta.

It's a mostly welcome change but brings with it all the anxiety associated with gentrification.

"We're seeing new people become interested in the community, and even though there has been a high rate of vacancy in the area, what you don't want to see is displacement," said Eloisa Klementich, president and chief executive officer of Invest Atlanta. "We are doing all we can to keep our valued residents in the community. They should not be displaced, not on our watch."

Among the city's responses is a ground-lease program designed to protect what Invest Atlanta describes as "legacy residents" who want a path to homeownership in their neighborhood but can't afford a mortgage.

Through the Atlanta Land Trust, homebuyers using the ground-lease program BUY only the house itself, leasing land from the city at $1 annually on a 99-year ground lease. If the house is sold at a later date, the owners keep any appreciation on the structure, while the land remains in the city's hands in perpetuity.

The concept is under review in big cities such as Atlanta and metro Miami, plus small and midsize areas, including Chesterfield County, Va.; Bend, Ore.; and Tacoma, Wash. Proponents say it lowers costs, increases neighborhood stability, creates pride of ownership and builds equity over time.

"It's about meeting people where they're at," Klementich said. "Some people want to buy a home but are not quite there yet. If that's where you're at, this is a good option if you want to try out homeownership."

In Atlanta, one modular house has already been constructed on James Brawley Drive in English Avenue, with five more on the way. The house, featuring beige paint with white trim, a one-car garage and a small porch fronting a grass-covered yard, was delivered via truck and loaded into place by giant cranes. With a "We Love English Avenue" sign perched out front, the house sits in a neighborhood with more than its share of abandoned properties, but also a small park and houses beginning to undergo renovation.

Isaac Sanford, a 24-year-old bartender at the Moxy Atlanta Midtown hotel, lives at the Brawley Drive house. For now, he's just a renter but hopes to own one of the ground-leased houses in the near future.

"One of my favorite things about English Avenue is the access to the city and to midtown," said Sanford, an Atlanta native who has looked into traditional homeownership in the past but found it out of his reach. "Living in the actual house is great, too. It's not what people think of when they hear the word 'modular.' It feels like any other house."

The Invest Atlanta houses will have target price points from $135,000 to $160,000, significantly below the city's median home price of $275,000, according to the Atlanta Realtors Association.

Including down-payment assistance, the houses could be available to those earning between 60% and 80% area median income (AMI). According to the U.S. Department of Housing and Urban Development, AMI in metro Atlanta was $74,800 for a family of four in 2018, so 60% AMI would be $44,880.

Not only do residents buying ground-lease houses pay less in upfront and monthly costs, but they won't pay property taxes on the land and won't be subject to the price fluctuations that often accompany renting.

Ground leases have long been a common feature in commercial real estate. Vincent Yao, a Georgia State University Urban Studies Institute professor, points out that ground leases are also the norm in parts of Europe and Asia and that the added costs of land greatly increase the price of homeownership for Americans.

"When land is owned by a private individual, there's an open market to trade the land and these days, depending on where you are, buying land is not cheap," Yao said. "Land typically accounts for a significant portion of the cost. In some places, the land costs more than the structure."

While the number of units Invest Atlanta is creating may not have a major impact, Yao said ground leases can be an effective method of creating inexpensive units.

Ground leases aren't necessarily a new phenomenon with residential real estate in the United States either, but Atlanta is not alone in starting a program to try out the concept.

In Virginia's Chesterfield County -- near Richmond -- has debuted a program called the Maggie Walker Community Land Trust, which closed on its first house earlier this year.

"The land trust was awarded a $500,000 grant to put nine houses under contract for homeownership," said Dan Cohen, director of the Chesterfield County Community Enhancement Department. "The land trust will sell the house to a resident, the resident has an equity interest in the house and can sell it when they want to go."

Chesterfield's program is the first in the Richmond area, population 1.2 million, and second in Virginia. Median income in metro Richmond is $67,633, and the ground-lease program targets buyers making 80% ($54,106) or below.

"The market in Chesterfield is quite hot," Cohen said. "The median home price is around $250,000, so to take that down $80,000 by removing land costs makes it much more reasonable for somebody to live here... . At 80% AMI, your target market becomes nurses, teachers, police folks."

Cohen said reaction from neighbors for or against the program has been muted, as most simply don't realize the involved houses are under a ground lease rather than a traditional fee simple model.

"There's no visual identifier that this is a land-trust house," Cohen said.

The land trust has already sold a few houses in Richmond proper, one of which is a two-bedroom, one-bathroom that went to 26-year-old architect Jeisson Apolo Armas for $145,000.

A native of Ecuador who said he grew up in a low-income household, Armas moved to Richmond from New York after college in hopes of finding cheaper land. But houses in Richmond were still out of his reach until he learned about the Maggie Walker Community Land Trust.

The house Armas bought is older, built as a part of a streetcar suburb and recently renovated by Habitat for Humanity. He said he hopes to stay in it for roughly five years before trading in his equity and crossing the bridge to full homeownership.

"They find people who are on the verge and can almost reach homeownership, and give them that extra boost," he said. "It is so helpful because buying a house is not always easy. We don't all have stocks, trust funds or savings accounts."

The central Oregon city of Bend, with a metro population of 175,000, last year introduced a ground-lease program called Kôr Community Land Trust. The group plans to place fives houses under ground leases in its first round.

"A lot of the folks we're providing homeownership opportunities for are public service workers," said Amy Warren, co-founder and executive director of the land trust. "We depend on them to make our community and economy function. Allowing them an opportunity to put roots down through homeownership and stable housing is a lot different from putting a family in a rental unit."

She said Kôr is helping provide houses for teachers, builders, servers and maintenance workers. Bend has a median household income of $52,471, with a median house cost near $450,000. Warren said she recently pulled income data for local school system employees, which is public record, and found that many would qualify for a home through the program.

Kôr will charge around $50 or $60 monthly to lease land for each house, plus a separate homeowners association fee. The long-term plan is to offer 25% of houses to those at or near AMI, and 75% to low or very low income earners.

"We'd like to keep doing this as long as there's a need, which I don't see going away any time soon," Warren said. "The biggest challenge is the search for land, because land has such a high value."

As with Atlanta, Warren said she hopes the program will allow long-term residents to own a house and stay in town.

It's a battle Precious Muhammad, who lived in Atlanta's English Avenue for 10 years and owns a property in Vine City, knows well. She is a flight attendant who is also involved in the local real estate scene, and she said it's a challenge for long-term residents to stay in their homes.

"Stabilization is what the community needs," she said. "A lot of people have lost their property just because of the taxes. A ground lease allows people to maintain a budget month to month." 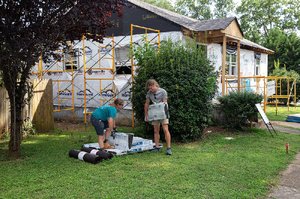 Photo by For The Washington Post/PARKER MICHELS-BOYCE
AmeriCorps workers Courtney Grantham and Benjamin Veilleux pick up supplies at a Habitat for Humanity house in Richmond, Va., in August. 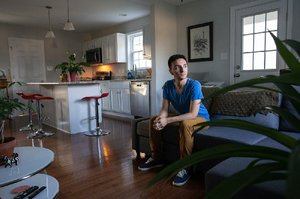 Photo by For The Washington Post/PARKER MICHELS-BOYCE
Jeisson Apolo Armas bought his ground-lease house in 2018. 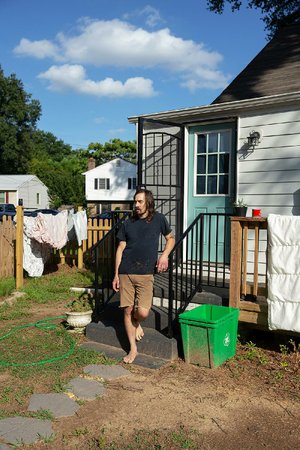 Photo by For The Washington Post/PARKER MICHELS-BOYCE
Tom Gillis stands in the backyard of the house that he bought with a ground lease in 2018 through the Maggie Walker Community Land Trust in Richmond, Va.