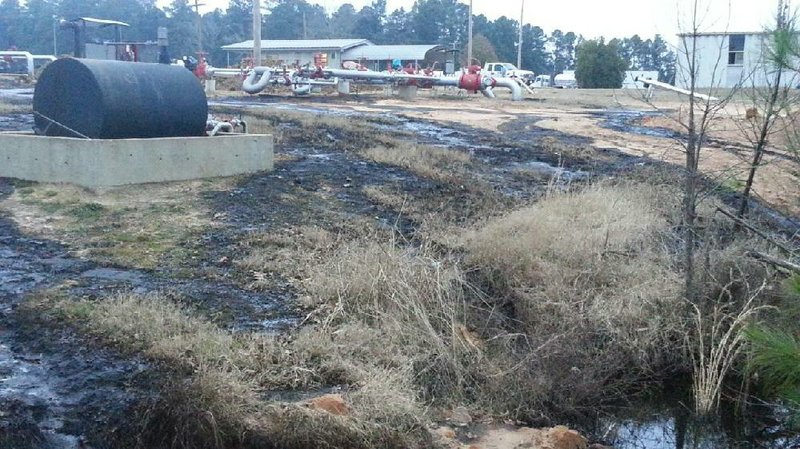 In this file photo provided by the U.S. Environmental Protection Agency oil covers the ground after a crude-oil spill at a Lion Oil facility near Magnolia.

A Tennessee oil company faces a $2.3 million fine for spilling crude oil into waters that eventually drain into the Ouachita River, more than six years after the spill.

The U.S. Environmental Protection Agency and the Arkansas Department of Energy and Environment have entered into a proposed consent decree with Delek Logistics, which also operates as Lion Oil Co.

The company spilled 5,890 barrels, or 247,380 gallons, of oil from its Magnolia facility in March 2013. It went largely unnoticed by the public at the time because of the spill's location in an undeveloped part of Columbia County.

The 13-hour spill stretched from the facility into a ditch, which eventually drained into Little Cornie Bayou and Lake D'Arbonne. The lake flows into the Ouachita River.

The public has until Oct. 7 to submit comments on the proposed decree.

Officials with the Department of Energy and Environment and officials with Delek Logistics did not make anyone available for an interview regarding the consent decree. But state officials said in an email that follow-up tests showed "the environment was restored to its natural habitat."

Columbia County Judge Larry Atkinson and Office of Emergency Management Director Larry Taylor said they were not familiar with the details of the consent decree.

Taylor said he was not involved in the case once state and EPA officials responded shortly after the spill, although he received regular updates on the cleanup process, which he believed to be complete.

In the consent decree, the company does not admit nor deny allegations in the complaint filed by the EPA and the state last summer.

Under the terms of the decree, the company must pay the United States $1,705,460 in civil penalties, with interest accruing since Jan. 25 of this year. The company must pay Arkansas $550,000 that will be deposited in the state's Hazardous Substance Remedial Action Trust Fund, which is "largely used for conducting emergency response and state-funded land remediation and restoration due to hazardous-substance impacts," according to the state.

The state and EPA allege the company knew that its equipment was in disrepair and at risk of failure, yet it had no record of maintenance performed prior to the March 8, 2013, spill. The leak came from an underground strainer that was more than 60 years old and corroded.

The consent decree calls for the company to sample surface water, soil and sediment at quarter-mile intervals on Little Cornie Bayou.

March 25 and 29 tests in 2013 showed toxic levels of benzene in the soil. That made it hazardous waste, and the company did not transport it using hazardous waste protocol and placed it in a landfill not permitted for hazardous waste, the state and the EPA allege.

Then, if the assessment shows potentially unacceptable human health or ecological risk, the company must do a site-specific risk assessment and, if necessary, form a plan for monitoring or remedial action within 90 days.

It would have no further obligations if the samples are clean or if the assessment shows no potential risk.

The company must also create a nearby spill response materials cache to aid response. The company has already stored emergency response equipment at a nearby warehouse.

According to the consent decree, Delek has done several things since the spill. The company expanded its pond capacity to 4,800 barrels of oil. At the time of the spill, the pond had trees and other plants that decreased the pond's capacity and ability to slow the spill.

Delek also has installed new leak detection meters on facility pipelines and alarms, among other things.

Delek Logistics, also know as Lion Oil, has an extensive history of environmental noncompliance in Arkansas.

Lion Oil or Delek Logistics has had more than 40 inspections with violations at its facilities in Arkansas since 2010, according to Arkansas Department of Energy and Environment data analyzed by the Arkansas Democrat-Gazette. That puts the company near the top of those with the most inspections with violations. Most of the entities with the highest inspection violations are landfills, which are inspected on a much more frequent basis than most permit holders.

Only two entities that were not gas stations or landfills had more inspection violations than Lion Oil during that time: The Arkansas Department of Transportation and Great Lakes Chemical. Both had more than 50.

The company has had another 107 emergency response events since 2010 at its Arkansas facilities, according to another database analyzed by the newspaper. Those events were largely related to malfunction-related spontaneous releases of more than 500 pounds of sulfur dioxide into the air, which have occurred over a period of years.

The Department of Energy and Environment has issued three legal orders against the company during that time. 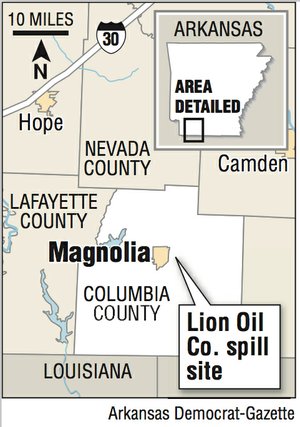