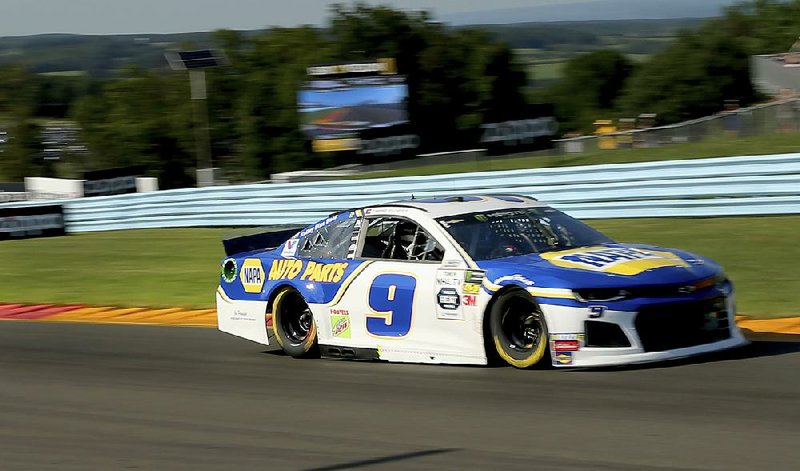 CONCORD, N.C. -- The Roval at Charlotte Motor Speedway was created specifically to add a unique venue to NASCAR's playoffs and the hybrid road course doesn't disappoint. As a reminder, last year's inaugural event ended with the leaders crashing each other trying to win.

A return trip to this 17-turn, 2.28-mile circuit hasn't made the course any more comfortable, and a multitude of drivers have spun off track, hit the tire barriers and struggled to get through a rebuilt chicane. It makes for a curious challenge in today's elimination race, when the 16-driver playoff field will be trimmed by four.

"This place is so treacherous and there's just not a lot of room for error," Chase Elliott said Saturday after posting the fastest lap in final practice.

"To make a move on somebody comes with a little bit of risk. I think it's going to be a really aggressive race."

The stakes are high for the championship field as only Martin Truex Jr., winner of the opening two playoff races, Kevin Harvick and Kyle Busch have locked themselves into the second round. Brad Keselowski advances with a 34th-place finish, Denny Hamlin moves on by finishing 33rd and Joey Logano only needs to finish 29th.

Elliott, winner on the road course at Watkins Glen in August, needs to finish 16th or better. But he had a poor qualifying effort -- he was 19th while Hendrick Motorsports teammates William Byron, Alex Bowman and Jimmie Johnson were first, second and fourth -- and knows he must deliver today.

"We aren't locked in, so we have to have a good run," Elliott said.

But The Roval is so unlike anything else on the NASCAR circuit that drivers have struggled in every on-track session. Truex had to change his engine during Saturday's final practice when his gears malfunctioned, and Johnson damaged his car when he rolled off course and backed into the tire barrier.

It was Truex and Johnson a year ago who wrecked each other with the checkered flag in sight, allowing Ryan Blaney to dart past them for the victory.

That precedent has the field nervous, particularly the four drivers at risk of elimination. Bowman, Clint Bowyer, Kurt Busch and Erik Jones will all try to race their way into the second round, but Jones almost certainly needs to win to overcome a 42-point penalty levied when his car failed inspection last weekend.

The rest of the field is bunched very tightly together with the possibility of some major point shuffling today.

Byron, a Charlotte native, starts on the pole alongside Bowman, his teammate and challenger for a spot in the second round. Byron is in the final transfer position, just two points ahead of Bowman.

"I kind of just have to run well, right?" said Bowman.

The Roval uses twists and turns through the Charlotte Motor Speedway infield with chicanes on the backstretch and frontstretch to slow the cars and, potentially, increase passing on the oval portion of the track. An added wrinkle from last year is an overhauled backstretch chicane revamped to make it a braking and passing zone.

The backstretch chicane last year acted more as a slalom and drivers didn't have to brake hard enough in that area, which was 32-feet wide at its widest point. Track officials began work on rebuilding the chicane immediately after the Coca-Cola 600 in May and the revision has made it a true sharp left, with a hard right to get into it. The width has been expanded to 54-feet and drivers have more flexibility on how aggressive they'd like to be in that portion of the track.

The chicane was only finished last week, so drivers are still adapting.

"I think that's going to add an interesting element to the race. The old chicane was just really, really fast and it was hard to run through there behind another car," said Aric Almirola, who sits 11th in the standings, one spot above the cut line.

"The other car would really gap you because you were in dirtier air trying to go through a very tricky spot on the race track. Now it's less aero dependent going through that chicane on the backstretch, and a really heavy braking zone getting into it, which can present an opportunity to pass."

IndyCar champion Josef Newgarden got to drive through the chicane in an exhibition Friday in an Indy car, and the veteran of road course racing gave it his stamp of approval.

"I'm sure the NASCAR guys are going to like it," he said. "Keeps them honest, creates more of a braking zone, a better setup for coming onto the final banking set into the final corner. I hope they race better because of it."