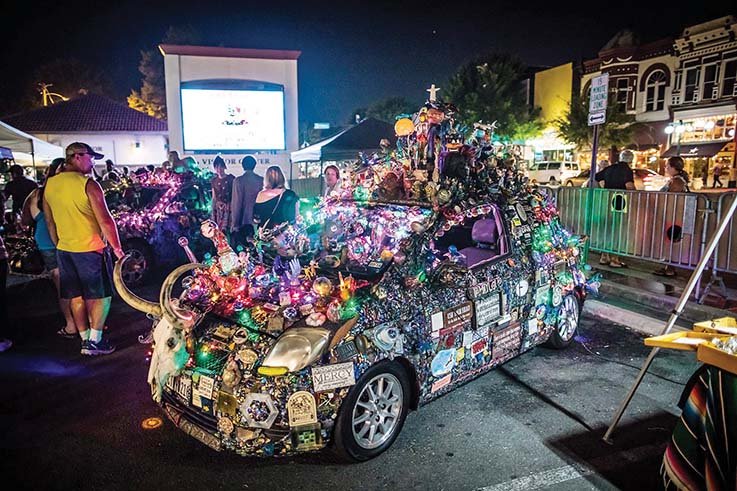 Festival attendees view one of the Art Cars on display at last year’s Hot Water Hills Music & Arts Festival in Hot Springs. This year’s event, scheduled for Friday and Saturday at the Hill Wheatley Plaza, will feature 20 vendors, activities for kids and a variety of food.

HOT SPRINGS — The ninth annual Hot Water Hills Music & Arts Festival, which is scheduled for Friday and Saturday in downtown Hot Springs, will feature live music, art vendors and, after having such a success last year, an expanded Art Cars show.

Bobby Missile, director of the festival, said the vehicles are transformed into artistic pieces, driven around the festival and eventually parked in the perimeter for the festival. He said there is going to be “a lot of cool stuff happening throughout the festival as well.”

“It is going to be another great year, with a fantastic lineup with bands from all over,” Missile said. “We have a band coming all the way from London called The Wandering Hearts. I would classify them as Indie Folk or Americana.

Thunder Jackson, a band from Oklahoma City, is another of the headliners, and “they are making waves right now,” Missile said.

“This year, for our music, we want a celebration of genres,” Missile said. “We have loads of different genres, including folk, rock, old country, jazz, indie rock, funk and pop.

“We will have loads of different stuff this year. We are excited about it. There will definitely be a wide variety for people to choose from.”

Missile said the festival will also have 20 art vendors throughout the weekend. He said one of the popular artists is Justin Clark, who designed the poster for this year’s festival.

“He is a tattoo artist who also draws on skateboards,” Missile said. “He is very popular. We will also have a number of people selling clothes.”

Missile has lived in Hot Springs since 2006. He used to own his own booking agency and was in a touring band. He wasn’t involved with the festival in the very beginning, but since coming on board for Low Key Arts in Hot Springs, he has assisted in booking the Hot Water Hills and Valley of the Vapors festivals.

“I was really just too submerged in the involvement,” Missile said.

“We are a sight to be seen; that’s for sure,” Missile said. “I feel like when we throw an event, it becomes the thing to do, and it is right here in downtown, next to everything, including the national park and Bath House Row.

“Usually, it is the first weekend in October, and the weather is absolutely wonderful outside because it dips down and is cooler. We try to be visually stimulating.”

Individual tickets for the event are $12, and a two-day weekend pass is $20. Children 12 and younger are admitted free, and the festival takes place both outdoors and in a large tent. The audience area is free-standing general admission, with very limited seating. It is free to get in from noon to 3 p.m. Saturday.

Missile said the festival gets a lot of foot traffic from people who are in Hot Springs visiting the shops downtown.

“We will have loads of activities for kids, including face-painting,” Missile said. “One of our art cars is a chalk car, so the kids can draw on the car itself. So it is a family deal and family-friendly and is for everyone.”

Missile said the festival will also have food trucks, so “you can spend the whole day out there, if you like.”

“One of the selling points to the bands that come here is the opportunity to perform in a national park, to be able to see the sights and the scenic environment. Hot Springs is on the list of desired locations; everyone wants to come through here,” Missile said.

“The movement of music in Hot Springs has definitely grown and has become a solid foundation of people who have been involved from all over the world,” he said. “Our events pretty much book themselves. It is a desired spot because it is a beautiful place with beautiful architecture. It is a captivating and mesmerizing place.

“I could go off on that all day long. I am a huge fan of Hot Springs, and that is why I have set my roots here. There is a lot of excitement going on here. It is pretty cool to be a part of it.”