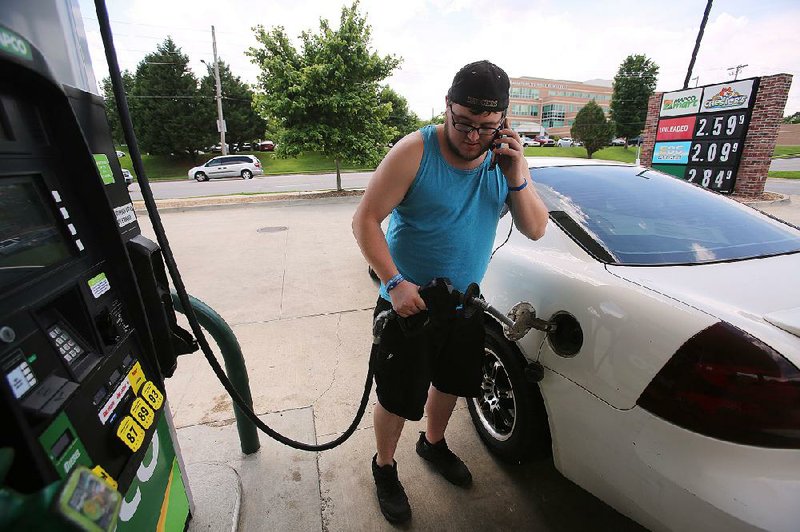 FILE — Dillon Lindsey of Beebe fills up his car at the Mapco gas station on Springhill Road in North Little Rock in this May 23, 2018, file photo.

Motorists will be digging deeper in their pockets to pay a new wholesale sales tax on gasoline and diesel in Arkansas, starting Tuesday.

Owners of electric and hybrid vehicles also will be forking over more in registration fees to Arkansas, also starting Tuesday.

The tax and fee increases are included in a highway and road funding law, Act 416, enacted by Gov. Asa Hutchinson and the Legislature during the regular session earlier this year.

Select the average miles per gallon your vehicle gets and whether it's diesel or gasoline, and then enter the average number of miles you drive in a month. The U.S. Department of Transportation estimates that Americans drive 13,476 miles a year, or 1,123 a month, but you can make that figure higher or lower.

[Gas tax calculator not showing up above? Click here to see it » arkansasonline.com/gastax]

In fiscal 2019, which ended June 30, the state collected $68.8 million in general revenue from casino-gambling operations at Southland Casino Racing in West Memphis and Oaklawn Racing Casino Resort in Hot Springs.

But state officials project a drop in casino revenue to $31.2 million in fiscal 2020 because of a lower state tax rate imposed under Amendment 100 to the Arkansas Constitution. Then they project that figure will grow to $55.9 million in fiscal 2021 and steadily increase to $81.8 million by fiscal 2028, as up to two more casinos come online and business increases.

The new wholesale sales tax on fuels, the higher registration fees and the other funding are projected by state officials to raise $95 million more a year for the state Department of Transportation for highways and $13 million more a year apiece for cities and counties to spend on roads.

State Sen. Terry Rice, R-Waldron, who sponsored Senate Bill 336 that became Act 416, said in an interview last week that he estimates the average person with cars with average mileage will spend roughly $15 to $30 a year more in state fuel taxes.

"For getting some much needed highway maintenance, I think it will be a good value," he said.

Fixing the damage to a car from a bad pothole will cost motorists far more than the tax increase, he said.

"Everybody is trying to get out of paying taxes," he said last week.

But "everybody using the roads needs to pay," Rice said.

The registration fee increase ended up in Act 416 because that was the consensus of various groups that worked on the bill, Rice said.

As for the new tax's direct impact on gasoline prices at the pump, James Williams, an energy analyst who operates WTRG Economics near Russellville, said Wednesday that "crude oil closed down $1.35 at $57.29" on Tuesday and "that was enough to counter the increase in gasoline tax.

"We don't know for certain what oil will do between now and Monday," Williams said in a written statement.

"The bottom line is that normal price fluctuation is enough that most consumers wouldn't notice the tax impact if they didn't read your article," he added.

Asked about the impact of the diesel tax increase on the average truck driver, Arkansas Trucking Association President Shannon Newton said in a written statement, "It's important to note that all commercial traffic engaged in interstate commerce remits fuel tax through the International Fuel Tax Agreement (IFTA) which calculates the tax burden based on where miles are actually driven, not where the fuel is purchased, so all commercial trucks driving through Arkansas are subject to the diesel tax rate."

The average mileage for commercial trucks in Arkansas is 6.27 miles per gallon based on the GPS/telematics provider Geotab's benchmark study, Newton said.

"If a truck gets 6.27 miles per gallon and the price per gallon is going up [6] cents, that is roughly a penny per mile ... driven in Arkansas," she said.

"It's difficult to pin mileage on an 'average' truck driver. A truck driver spending the majority of his/her time on local deliveries in Arkansas drives fewer miles (approx. 45,000/yr) than a truck driver traveling through the state on regional or national routes (approx. 120,000/yr)," Newton said in her written statement.

As for how truck drivers view the new tax on diesel, Newton said thousands of truck drivers spend their work day moving freight on Arkansas highways, and the industry relies on the efficiency and dependability of the highway network.

"The costs of congestion and re-routing are real," she said. "The majority of the trucking industry is willing to invest more in infrastructure because we believe it will create a safer workplace, better maintained infrastructure for our equipment and improve our ability to meet the demands of more customers, wanting more products, delivered on a tighter time frame than ever."

Act 416 requires the state Department of Transportation to make a report available to the governor and Legislative Council by Nov. 1 of each year detailing the expenditure of the revenue distributed to the department under this law and the projects financed with the revenue.

The entire $95 million raised for the Department of Transportation under Act 416 will be used for "system preservation -- basically taking care of what we already have," said Danny Straessle, a spokesman for the department.

"That includes overlays, bridge repair, etc.," he said. "These are the items that allow us to extend the useful life of roads/bridges.

"There will be no capital improvements made with this money ... no new construction," Straessle said.

Act 416 zipped through the Republican-controlled Legislature within about a month, after Hutchinson and legislative leaders unveiled on Feb. 11 a two-pronged plan to raise $300 million a year for highways and $57 million a year each for cities and counties for their roads. Act 416 is one part of the governor's two-pronged road plan.

Rice introduced SB336 on Feb. 14 and the Senate voted 27-8 for the measure a week later, according to the General Assembly's website. On March 4, the House voted 71-26 on an amended version of the bill. The Senate approved the changes 25-8 on March 5 and sent the bill to the governor, who signed it March 12.

Asked about the reaction that he and his office have received about the first fuel tax increases enacted since 1999, Hutchinson said Thursday, "The response has been very positive and supportive.

"Everyone understands the need for more highway funding and legislators did not want to go home without uniting to pass a bill the public supports," the Republican governor said.

Hutchinson said he and his office have received "very little comment" about the increased registration fees on electric and hybrid vehicles, "but the comments have generally been supportive.

"It is based upon a sense of fairness that every type of vehicle use should contribute to highway maintenance," he said.

On April 1, 1999, then-Gov. Mike Huckabee, a Republican, signed into law the last fuel tax increases enacted by the Legislature. Democrats controlled the Legislature back then.

Act 1028 of 1999 raised the excise tax on gasoline by 3 cents a gallon to 21.5 cents, phasing it in from 1999 until 2001. The excise tax on diesel fuel phased in a 4-cent-a-gallon increase to 22.5 cents. Both increases were projected to raise about $60 million a year when fully implemented, state officials said at that time.

The other part of Huckabee's highway program was Act 1027 of 1999, to authorize an election on whether the state would issue $575 million in bonds for interstate repairs. Voters said yes.

With Hutchinson's plan, the second part is a proposed constitutional amendment for the 2020 general election ballot. The amendment, referred to voters by the Legislature, would make permanent the half-percent sales tax for highways approved by voters in November 2012 for 10 years.

The half-percent sales tax, if renewed, is projected by state officials to raise about $205 million a year for highways and about $44 million a year each for cities and counties.

Newton, the trucking association president, said a committee to advocate for voter approval of the proposed constitutional amendment is expected to be formed in October and launch its campaign in November.

Ryan Norris, state director for the Arkansas chapter of the conservative Americans for Prosperity group, said that "we are talking" about the possibility of creating a committee to campaign against the proposed amendment.

"The public hasn't focused on the ballot question yet, but the audiences I speak to understand the need and that there is no new tax." Hutchinson said in a statement. "They understand that counties and cities will lose existing funding if the existing half-cent sales tax is not extended."

This year, Alabama, Illinois, Ohio and Virginia also enacted gas tax increases, although Virginia's only applies to a portion of the state, according to the national conference of state legislatures.

Since 2013, 31 states and the District of Columbia have enacted legislation to increase -- or possibly increase -- fuel taxes, the National Conference of State Legislatures reported. But Missouri's voters in 2018 blocked a planned increase in that state's motor fuels tax.

In 2018, Oklahoma raised its gas and diesel taxes to 19 cents a gallon.

In Arkansas, Senate Republican leader Bart Hester of Cave Springs, who voted against Rice's legislation, said last week that he's heard nothing from constituents about the coming increases, but expects he will when they take effect.

Senate Democratic leader Keith Ingram of West Memphis said "sometimes people are unaware until it happens," but "roads mean so much here with Interstate 40 and Interstate 55 and are the key to economic growth."

But Rep. Dan Sullivan of Jonesboro, who voted against Rice's legislation, is pointing to the vote by Sen. John Cooper of Jonesboro for the bill in Sullivan's bid to oust Cooper in the March 3 Republican primary election.

"Taxes are a big issue for our community," he said.

"I haven't had any push-back on that at all," Cooper said. "Nobody is fussing at me on that vote."

Sullivan said the state needs to put more general revenue into highways to provide more stable funding. He said one source of funding might be the governor's Quick Action Closing Fund, now used to recruit and retain industry.

"You would be taking revenue from schools," he said. "It would have bad ramifications."

In a 2016 special session, the Legislature enacted Hutchinson's plan to use 25 percent of state general revenue surpluses, $20 million a year in interest earnings from the state treasury and several million dollars in other funds to raise about $50 million a year. The money matched $200 million in federal highway funds. Both Cooper and Sullivan voted for the measure, according to the General Assembly's website. 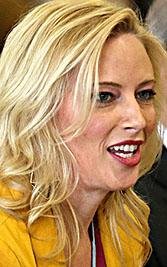 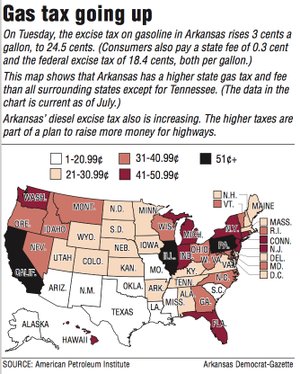