Private-run lockup firm considered in Arkansas has share of complaints 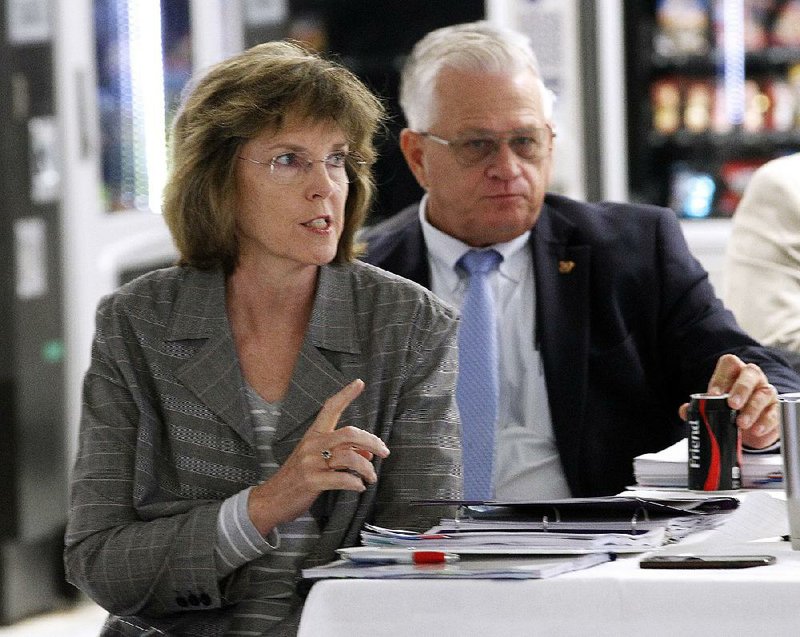 Arkansas Department of Correction director Wendy Kelley (left) answers a question during the board of corrections meeting on Wednesday, July 11, 2018, at the Wrightsville Unit.

Complaints over a failure to conduct regular cell checks and a string of jailhouse deaths have dogged LaSalle Corrections' management of a lockup in Texarkana, Texas, even as officials are considering the company to operate a new jail in southeast Arkansas.

LaSalle, based in Ruston, La., has operated the Bi-State Jail in Texarkana since 2013. Across the street from the jail, about 325 prisoners from Arkansas are housed under contract with the Arkansas Department of Correction at the Bowie County Correctional Center, also operated by LaSalle.

Arkansas prison officials last week said they are considering ending the state's contract at the Bowie County lockup and moving the prisoners there to a regional jail planned for either Drew County or Bradley county, to be operated by LaSalle.

The Arkansas jail would house as many as 500 state inmates, along with local offenders from the two counties.

In discussing the proposal, however, prison officials said they were aware of issues with LaSalle, including lawsuits over the deaths of two diabetic inmates in recent years. Officials also acknowledged concerns that LaSalle, which plans to pay guards less than they receive at Correction Department facilities, will have trouble keeping a full staff.

More than 30 inmates have died of suspected suicides or drug overdoses at Arkansas state prisons since 2018.

"My problem with Bowie County is it's an older facility, and whether it's LaSalle's job to do it or the county's, I don't think the upkeep on it has been sufficient to continue," Magness said.

According to the Texarkana Gazette, the Texas Commission on Jail Standards twice found the Bi-State Jail out of compliance this year in regard to regulations that the staff conduct cell checks every hour. The commission's inspections occurred after the suicide of inmate Michael Rodden in July and the death of Franklin Greathouse of an apparent seizure in March.

Those deaths followed the deaths of Morgan Angerbauer, a 20-year-old woman at the jail in 2016, and Michael Sabbie, a 35-year-old who died after being pepper-sprayed at the jail in 2015, according to news accounts. Both of the inmates were diabetic, and their families each later reached settlements with LaSalle after alleging that the company failed to provide adequate medical treatment.

In 2017, a nurse for LaSalle pleaded guilty to misdemeanor negligent homicide for refusing to treat Angerbauer.

A spokeswoman for the Arkansas Department of Correction said that only one state inmate has died while in the Bowie County lockup. Oscar Garza died of natural causes in 2016.

In an email reply to a list of questions from the Arkansas Democrat-Gazette, LaSalle Executive Director Rodney Cooper said deficiencies related to cell checks were self-reported by the company to Texas regulators, and were not found to be related to the deaths of Rodden or Greathouse.

He added that the company responded by firing employees, adding additional supervisors and conducting training, as well as installing a new electronic system that logs when staff members conduct proper cell checks.

Cooper said he was unable to comment on the deaths of Sabbie and Angerbauer, citing litigation.

"A death of an inmate in custody is tragic both to their family and the staff who work in a prison facility," Cooper said. "We strive everyday to protect life of those who are in our facilities."

The proposal for a private, for-profit jail in southeast Arkansas comes nearly 20 years after the previous private operator of adult lockups left the state.

Wackenhut Corrections Corp., now part of the GEO Group, declined to renew its contract to operate two prisons in Newport in 2001, saying it could no longer afford to do so.

At the time, the Board of Corrections was considering whether to sever ties with the company over concerns about staffing shortages and unsanitary conditions. The chairman of the prison board at the time, Mary Parker, told the Democrat-Gazette, "I'm just not sure Arkansas is the place for long-term private prisons."

In the intervening years, however, the number of state prisoners has continued to grow, straining already crowded prisons and filling county jails with a backlog of state inmates that state prisons have no room for. That backlog totaled 1,135 inmates Thursday, even after recent population declines.

Lawmakers in recent years have balked at the cost of building a new prison, or even adding significant bed space at existing prisons.

That's where the plan for a regional jail comes in.

State and local officials described to the newspaper their agreement with LaSalle, under which they said the company would pay to construct the 600-bed jail if the counties and the Department of Correction agree to 20-year contracts to supply prisoners.

The contract voted on Thursday by the Board of Corrections would pay $44 per day to house each state prisoner, or about three-fourths of the cost at state-run prisons. The counties would pay less -- Drew County's County Judge Robert Akin said he was quoted $32.50 a day -- because LaSalle will not be required to offer as many services to county inmates.

Arkansas Corrections Secretary Wendy Kelley told the prison board Thursday that a benefit of moving the state's inmates from Bowie County to a regional facility in Arkansas would be that LaSalle would be required to follow the state's rules and regulations, not Texas' rules.

As in Bowie County, the contract agreed to by the board calls for a "contract monitor" to ensure that the counties and LaSalle are abiding by the standards.

Those regulations include having a minimum number of staff members on hand, Kelley said.

LaSalle plans to pay its officers a lower starting salary than the $30,788 a year most new officers make at Correction Department facilities, Kelley told the board, which she said will limit the number of state corrections officers leaving to take jobs with LaSalle.

The Arkansas Department of Correction, facing its own struggles with staffing shortages, has raised pay and offered bonuses at the most chronically understaffed prisons in order to attract candidates. Still, about 10% of positions were vacant in August, according to a monthly report.

Magness said several factors go into the high number of vacancies at prisons, including the difficulty of the work, but "I think if they pay much less than we will, they're going to have a problem."

LaSalle plans to offer starting pay of $11 to $12 per hour, according to Cooper, with certain positions or experienced officers starting at $15 to 1$8 per hour. The starting entry-level pay of a state corrections officer, earning hazard pay, is $14.80 an hour, according to spokeswoman Dina Tyler.

"I have expressed that concern to them, and their response to me is that they typically are able to hire retirees that have left the [Department of Correction]," Kelley said. "They do not appear to be concerned about it. They feel sure that they can do it."

Cooper said in an email that the company has a "very robust" human resources office that is experienced in recruiting different regions of the country.

Akin said that several years ago when he and other county executives in the Drew County area began exploring the idea of building a regional jail, they started by speaking to another company, Tiger Correctional Services in Jonesboro. Talks fell through, Akins said, because Tiger's price was too high.

The owner of Tiger Correctional, Chad Niell, said Friday that his company never quoted the county officials any price because a public bid for the project was never put out. In about a year of talking with the officials, he said he offered to buy land and build the jail for free, but nothing came of the offer.

"We never gave them anything definitive," Niell said. "They didn't know what they wanted to do."

By the summer of 2017, when leaders from five counties in the area met to discuss the project, the Democrat-Gazette reported that LaSalle had become the preferred contractor. Akin said he had seen LaSalle give a presentation about a year before at the Arkansas Association of Counties in Little Rock, which is how he became familiar with the company.

"[Tiger] promised us the moon, and I didn't get a handful of dirt," Akin said. "LaSalle came in with a rate I could deal with ... cutting our costs in half."

Drew County has a jail with about 40 beds, and it costs the county about $61 a day to hold an inmate, Akin said. In Bradley County, there is no county jail, and the sheriff must pay to have his inmates held in nearby jails.

Akin and another proponent of the project, state Rep. Jeff Wardlaw, R-Hermitage, visited the LaSalle-operated Jackson Parish lockup in Jonesboro, La., while scouting out the company.

Wardlaw, who said he's also visited the Bowie County jail, said the Louisiana lockup was much nicer than the one in Texas, where he said "space is very limited."

None of the counties has signed a formal contract with LaSalle to set construction of the facility in motion.

Meanwhile, opponents of prison privatization have raised alarms about the project.

In a statement Friday denouncing the plan, the American Civil Liberties Union of Arkansas pointed to a state ombudsman's report finding abuses earlier this year at an Arkansas youth lockup run by an Indiana company.

"Profiteering has no place in our prison system," said Holly Dickson, the legal director for the ACLU of Arkansas. "Privately-run prisons are infamous for their brutal conditions, understaffing, and a lack of transparency and oversight. It is inexcusable that the Board of Corrections would rush to put taxpayers on the hook for a decades-long contract without meaningful public input or accountability."

For Akin, however, the plan holds the promise of ridding himself of the cost and liabilities of running a crowded county jail.

If he's able to close his county jail, Akin said he would seek to turn it into another Crisis Stabilization Unit, one of several 16-bed facilities that have opened in the state to divert people with mental illnesses from being locked up in jail.

Echoing Gov. Asa Hutchinson, who last week touted his support for the regional jail as a "pilot," Akin said other county officials would be looking at results of the project as they deal with their own jails.

"If this works, it's going to be great for the state of Arkansas," Akin said. "If this one works, we're going to have three or four more."

Information for this article was contributed by Lynn Larowe of the Texarkana Gazette. 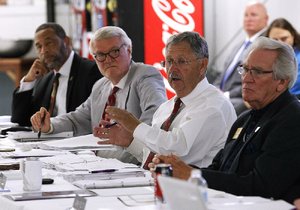 Photo by Thomas Metthe
Chairman Benny Magness (right center) asks a question as board members, from left, Tyronne Broomfield, Buddy Chadick and Bobby Glover look on during the board of corrections meeting on Wednesday, July 11, 2018, at the Arkansas Department of Correction's Wrightsville Unit. 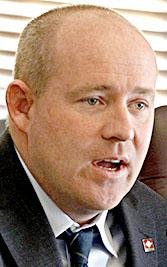