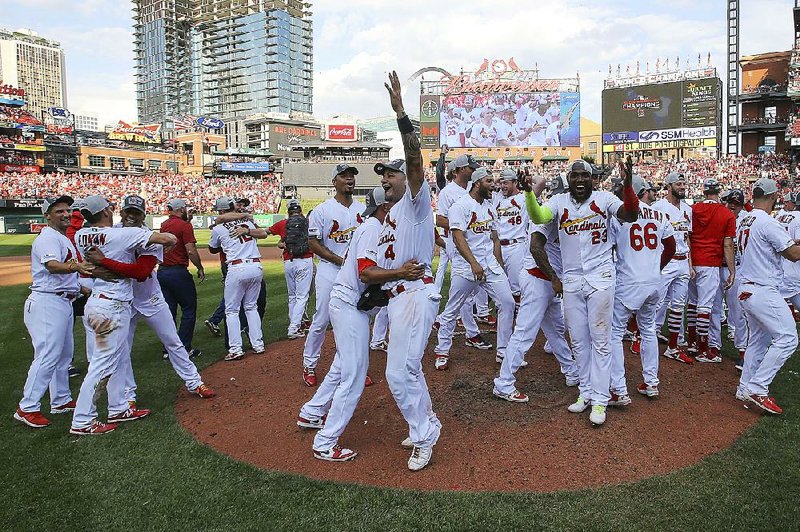 The St. Louis Cardinals celebrate clinching the National League Central with their 9-0 victory over the Chicago Cubs on Sunday in St. Louis. The Cardinals earned their first division title since 2015.

They were totally fine with that outcome.

The Cardinals clinched the NL Central in their last game of the regular season, using Flaherty's arm and Goldschmidt's bat Sunday to win their first division title since 2015 with a 9-0 victory over the Chicago Cubs.

"This is what it's all about," Manager Mike Shildt said. "I love to see the guys enjoy the fruits of their labor. It's something special."

The Cardinals built an 8-0 lead in the third inning and coasted into the best-of-five NL division series that will start Thursday at Atlanta.

St. Louis started the day with a one-game lead over Milwaukee. The second-place Brewers will play at Washington in the NL wild-card game Tuesday night, with the winner going on to play Los Angeles in the NLDS.

The Cubs lost on Joe Maddon's last day as their manager. It was announced before the game that he won't return next year.

The 23-year-old Flaherty tossed seven impressive innings. He gave up 2 hits, struck out 6 and walked 1 in an efficient 69-pitch stint.

"He continues to be amazing," Goldschmidt said.

Flaherty (11-8) stood in the on-deck circle waiting to hit in the bottom of the seventh. After Harrison Bader was retired, Shildt called Flaherty back to the dugout to remove him for a pinch-hitter.

The crowd at Busch Stadium went crazy and would not stop yelling until Flaherty emerged from the dugout to tip his cap.

"I was in shock, not sure what to do," Flaherty said. "That's for hitters. I wasn't expecting anything like that."

Flaherty has allowed just seven runs over his last 12 starts. He has an 0.91 ERA since the All-Star break.

St. Louis is back in the postseason after a three-year absence. The Cardinals have won or shared 12 division titles since the current format was developed in 1995.

Goldschmidt, who had three hits, added his team-high 34th home run. He was acquired in a trade from Arizona last December.

"For just this reason," Goldschmidt said. "My fondest memories in baseball are the celebrations. To accomplish this goal as a team, it's great. But we have to keep going."

St. Louis scored twice in each of the first of two innings against Derek Holland (2-5). Goldschmidt singled after Holland walked the first two batters.

Fowler added a two-run home run in the second for a 4-0 lead. He has a career-high 19 home runs.

Carpenter's drive in the third off Duane Underwood Jr. pumped the lead to 8-0.

METS 7, BRAVES 6 (11) Mike Soroka recovered from a shaky start in his playoff tuneup, but banged-up visitor Atlanta limped into October with a loss to New York in 11 innings when Dominic Smith hit a game-ending, three-run home run on his first competitive swing in more than two months.

ROCKIES 4, BREWERS 3 (13) Already relegated to an NL wild-card spot, Milwaukee lost to host Colorado when Jake Faria threw a wild pitch in the 13th inning that allowed the winning run to score.

RANGERS 6, YANKEES 1 Lance Lynn struck out 10, getting his career-high 16th victory, as Texas closed out the 26th and final season at their ballpark with a victory over visiting AL East champion New York.

ASTROS 8, ANGELS 5 Gerrit Cole earned his career-high 20th victory and finished with the best ERA in the AL, wrapping up a dominant season for himself and Houston with a victory over host Los Angeles.

BLUE JAYS 8, RAYS 3 Blake Snell lost in a tuneup for a potential postseason outing, and visiting Tampa Bay was beaten by Toronto in its last game before the wild-card playoff against Oakland.

WHITE SOX 5, TIGERS 3 Tim Anderson became the third Chicago player to win an American League batting title, finishing at .335 after going 0 for 2 in a season-ending victory over visiting Detroit.

NATIONALS 8, INDIANS 2 Host Washington stretched its winning streak to a season-high eight games with a victory over eliminated Cleveland in a regular-season finale that meant nothing to either club.