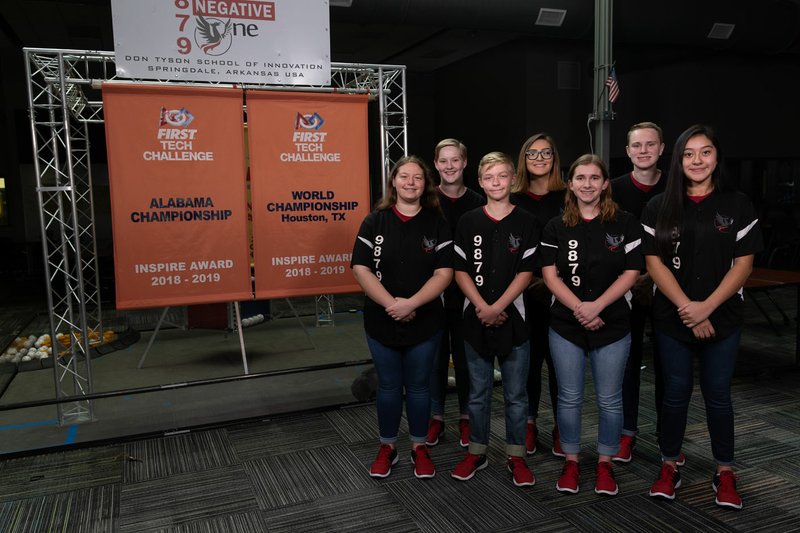 SPRINGDALE -- Community organizations and individuals have pledged thousands of dollars to help send a Tyson School of Innovation robotics team overseas to an international competition next month.

Root Negative One will represent the United States at this year's FIRST Global Challenge in Dubai, United Arab Emirates, after taking the top honor at the U.S. championship in April. Teams representing more than 175 nations are expected Oct. 24-27 at the Coca-Cola Arena in Dubai.

The Springdale team, in addition to designing its robot for the competition, has been raising money to pay for the trip for seven team members and three adults.

"The support from the community has been awesome," said Richard Cassady, one of the team's coaches and a professor of industrial engineering at the University of Arkansas. "One of the things I like the most about it is almost all of the money we've raised has come from Springdale. I like the fact we're not just Team USA, we're Team Springdale."

FIRST stands for For Inspiration and Recognition of Science and Technology. The organization is known for its robotics competitions for kids of various ages. Students design, build and program a robot to compete in a floor game.

Each team at the FIRST Global Challenge must consist of three to five students, ages 14-18, along with one adult technical mentor/coach and one team organizer, according to the Global Challenge website.

Also on the trip will be Kate Bowden and Isaac Brown, two team members who had much to do with the team's national championship, and Dru Samuelson, an engineering and robotics teacher at the School of Innovation. They will serve in volunteer roles, Richard Cassady said.

Tyson Foods this year opened its Manufacturing Automation Center downtown. The center offers a space for employees to develop in-house manufacturing processes with suppliers, and to learn how those processes and equipment work.

Derek Burleson, a Tyson spokesman, said the center and its leaders strive to provide inspiration and drive awareness among local schools about the importance of educational opportunities in the areas of science, technology, engineering and math. The company's investment in the robotics team aligns perfectly with that goal, he said.

"We're proud to support these incredible students who are representing our community on a global stage," Burleson said.

"We were very happy to help and have our name associated as one of the major sponsors of the robotics team going to Dubai," Ward said. "You just think, this is Springdale, Arkansas, these kids are from our schools, our school district and our community, and those are things our Rotary supports."

Each team received a kit of parts a few months ago they must use to build a robot that will compete in a game. The game, called Ocean Opportunities, involves two competing alliances -- each comprised of three teams from different nations -- working to clear the playing field, or "ocean," of different-sized balls representing pollutants. Robots have 2 minutes and 30 seconds to collect the pollutants and deliver them to specific processing areas.

Root Negative One team members meet a few times each week. After school Tuesday, they were using a computer to work on the design, trying to make the robot fit the prescribed height and width limits.

The competition is still nearly a month away, but the team has to have its robot done in time to ship it to Dubai.

"We originally said we wanted all of the computer aided design to be done last Sunday, so we're nine days behind," said Herrera, a team member, on Tuesday.

Although teams receive a kit, they don't get instructions on how to assemble their robot.

Herrera said she definitely feels more pressure preparing for the FIRST Global Challenge than she has for any other competition.

"We're representing the whole United States, so we want to make sure we represent well," Herrera said. "So I do feel a lot of pressure. But I think the fact that we're even able to go, that's an honor. So yes, there's a lot of pressure, but once we get to Dubai, we want to do as well as we can. I think it's going to be an amazing experience no matter what."

The team's itinerary was still uncertain as of last week, because it was waiting to hear from Dubai on its travel arrangements.

Root Negative One is in its fifth year. Herrera, Manos and Bryant Cassady are original team members. The team formed in fall 2015 when the School of Innovation was based in The Jones Center, before it moved to Hylton Road.

The team is not just about playing with robots. It also has established a community-service program, working year-round mentoring other local students and teaching them how to program and do computer-aided design, Richard Cassady said.

They've mentored robotics teams virtually in Australia, Peru and one from the African nation of Eritrea. The Eritrean students are now refugees living in Canada and will be competing in Dubai as well; the team is looking forward to meeting them in person, Cassady said.

Such activities count as part of the judging criteria at the FIRST robotics competitions. Teams are evaluated not only on the performance of their robot, but also on the design process, their ability to document and communicate their work, and community service and outreach programs. Teams judged the best overall across these categories receive the Inspire award, the top honor given at FIRST competitions.

Root Negative One's first year was "interesting," Manos said. The team didn't have a space to work in until November of that year, when Mathias Properties provided temporary space in one of its buildings.

At the team's first tournament -- the state championship in Mountain Home -- members were surprised to learn there was a component to every competition that involves making a presentation to judges. They had to wing it, Manos said.

"It was kind of a mess that first year," Richard Cassady said. "We didn't know what we were doing."

It all came together earlier this year, when the team took the Inspire award at both the Alabama championship and the national championship in Houston, where they competed against 160 teams, Cassady said.

"And when we competed for the Inspire award at Houston, we didn't just talk about what we did last season. We talked about how our program developed over four years," Cassady said.

The Tyson School of Innovation is a charter school operated by the Springdale School District. It opened in 2014 in The Jones Center; in 2016, it shifted to a campus of its own on Hylton Road. It serves about 1,200 students in grades six through 12.