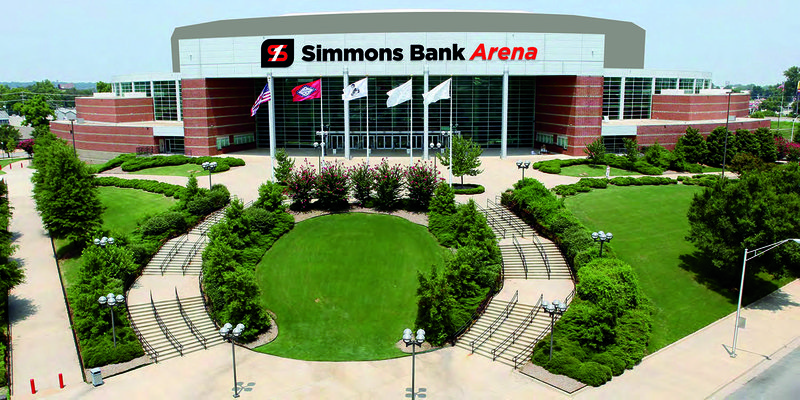 A mock-up of the signage set to be installed after Verizon Arena becomes Simmons Bank Arena this week.

Verizon Arena will change its name to Simmons Bank Arena this week, nearly a year after the bank signed a multi-million dollar deal to acquire naming rights.

The official name change is set for Thursday and coincides with the North Little Rock arena’s 20th anniversary. Crews removed Verizon signage from the arena on Monday.

“The arena is a beacon for economic vitality, culture and world-class entertainment in Arkansas,” George Makris, chairman and CEO of Simmons First National Corporation, said in a news release. “Simmons is proud to join our name with an organization that helps our home state flourish by driving commerce and creating shared experiences.”

The facility opened in 1999 as Alltel Arena and got a new name in 2009 when that company merged with Verizon. Michael Marion, the arena’s general manager, said last year that Verizon wasn't interested in extending its sponsorship.

The arena searched for a new sponsor, and Simmons Bank paid $10.5 million in November 2018 for naming rights to the 18,000-seat venue.

Simmons Bank is a subsidiary of Simmons First National Corporation, which is headquartered in Pine Bluff.

More than 400,000 people use the arena every year, according to the release, and musicians ranging from Elton John to Taylor Swift have played there. It has also hosted performances such as Disney on Ice and Cirque Du Soleil.

New branding on merchandise and social media will roll out on Thursday, according to the release. New signage is set to be installed later this year.

The arena is also celebrating the name change with a Facebook contest Oct. 3 on the Simmons Bank page that will give away two free tickets to the Eric Church concert Oct. 25.