TROY, Ala. -- Folks in Jonesboro may be talking about Saturday night's thriller at Veterans Memorial Stadium for a long time.

The night that an injury to a Troy offensive lineman triggered a game-clinching, 10-second runoff of the clock and a 50-43 victory for Arkansas State University.

The night that the Red Wolves had a 92-yard touchdown pass on their first offensive play, and a scoop-and-score 40-yard touchdown return on defense soon after.

The night that redshirt freshman quarterback Layne Hatcher, making the first start of his college career, went on the road and outdueled one of the Sun Belt's top passers in Troy senior quarterback Kaleb Barker.

If Saturday was any indication, the Red Wolves (3-2, 1-0 Sun Belt) and their big-play offense remain in good hands after losing junior starting quarterback Logan Bonner last week to a season-ending injury to the thumb on his throwing hand.

Hatcher's performance in relief wasn't perfect, but it was gritty.

"I knew we were gonna play in an awesome environment, which it was, and I knew I had playmakers around me, and I knew I had an O-line that was gonna protect me," Hatcher said. "My job was to not screw it up, get those guys a win, as they deserve it."

Hatcher is considered by some as the future at ASU. With Bonner's injury, Hatcher's time has arrived sooner than he could have anticipated after transferring from Alabama in April and joining ASU, the program he initially signed his letter of intent with in February 2018.

In his first start, Hatcher completed 25 of 35 throws for 440 yards, 4 touchdowns and 2 interceptions. The former Pulaski Academy star also had a few impressive scrambles for first downs. He said after the game that he had his "ups and downs."

His arm strength didn't match up Saturday with Bonner's, as evidenced by a number of slightly underthrown deep balls. ASU's receivers helped him out with multiple acrobatic catches.

Senior Omar Bayless made a tough snag over a defender on that 92-yard touchdown reception on ASU's first offensive play. Junior Jonathan Adams made a jump-ball catch over a defender late in the third quarter for a 32-yard touchdown and 45-37 lead. Senior Kirk Merritt leaped over two defenders for a 36-yard catch that led to a field goal and a 50-43 lead midway through the fourth quarter.

But Hatcher did what he's supposed to do in this offense.

The Red Wolves have multiple elite receivers, and when they're in one-on-one coverage, ASU is going to take the deep shots and trust that the likes of Bayless, Merritt and Adams will make a play.

Hatcher wasn't afraid to take those shots, and they paid off.

"All week, everybody told me just give [the receivers] a chance, and so I was giving them a chance all night," Hatcher said. "When in doubt, I was finding [Omar] and I was finding [Kirk] and saying, 'Here you go, go make a play.' "

There were a few freshman mistakes. Hatcher's two interceptions in the fourth quarter kept the door open for Troy.

The first was underthrown, and Troy cornerback Will Sunderland made a contested catch over Bayless at the Trojans' 1 with 8:46 to play and ASU leading 45-43. The second pick was the result of an ill-advised decision, with Hatcher throwing into double coverage on a third and 7 near midfield, gifting the Trojans one more chance on offense with under three minutes to play.

"There's obviously some plays he's gonna want to have back that we'll learn from. We don't want to turn the ball over," ASU Coach Blake Anderson said. "To throw the ball and put it around the guys and let them make plays, to be as calm as he was and manage the game as well as he did, this will be a great way to start, and he's got a lot of ballgames ahead of him."

Despite having their starting quarterback go down, as well as a list of other difference-makers, Saturday's victory showed there is plenty for the Red Wolves to look forward to in 2019.

And Hatcher will guide the way.

"I think it's good to just earn our respect and show the rest of the conference that we're here to do something," Hatcher said. "We got the talent, we got the group, we got to put it together, and there's still a lot of work to do obviously. But we want to show that we're capable, and I think we definitely are." 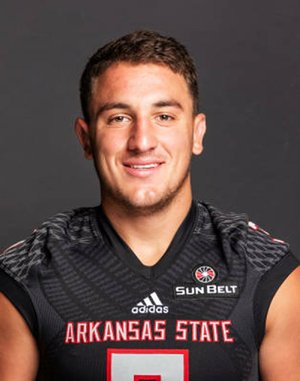