U.S. pitches a deal to Venezuela 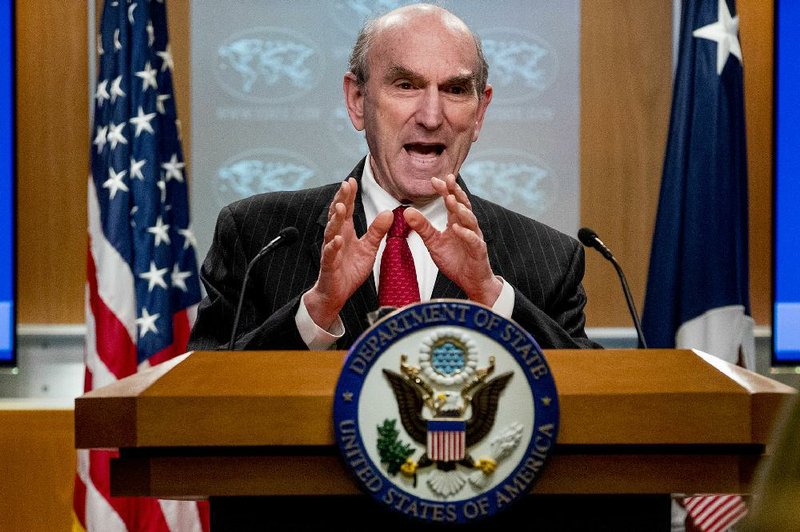 Special Representative for Venezuela Elliott Abrams said Tuesday in Washington that Venezuelan opposition leader Juan Guaido would be “very likely to win” in an election against President Nicolas Maduro. But officials insisted that the U.S. did not support any Venezuelan party. (AP/Andrew Harnik)

The Trump administration said Tuesday that it would lift sanctions against Venezuela if both President Nicolas Maduro and his political nemesis, opposition leader Juan Guaido, stepped aside and agreed to a transitional government guided by both the ruling socialists and opposition lawmakers.

The deal, announced as Venezuelans deal with the global coronavirus pandemic, is the first road map to relief from some of the harshest sanctions ever imposed by Washington. Described by Secretary of State Mike Pompeo at a news conference in Washington, it amounts to a power-sharing arrangement that would guarantee Maduro's socialists -- if not Maduro himself -- a seat at the table of a transitional government.

U.S. officials insisted Tuesday that they did not support any particular political party in Venezuela. But the move appeared to be an attempt to set up new elections in which the U.S.-backed Guaido could run. The Justice Department indicted Maduro and several members of his inner circle last week on narcoterrorism charges, and the administration announced a $15 million reward for information leading to Maduro's capture or conviction.

"We want Guaido to be able to run for president," said Elliott Abrams, the U.S. special representative to Venezuela. "And according to the polls I've seen, he is very likely to win."

[Video not showing up above? Click here to watch » https://www.youtube.com/watch?v=D5L-Ohcbh_0]

Washington is facing calls from U.N. Secretary General Antonio Guterres and others to ease economic sanctions in the midst of the pandemic. Maduro's attempts to obtain an emergency loan from the International Monetary Fund to fight the coronavirus have been rejected based on his contested status as Venezuela's head of state.

"It is precisely the Trump administration that must step aside by lifting unilateral coercive measures," Foreign Minister Jorge Arreaza said in a lengthy communique. Maduro's attorney general, meanwhile, issued a summons for Guaido to appear for questioning Thursday in connection with allegations of a violent plot to overthrow Maduro.

But the proposal was never meant as an olive branch to Maduro. It appeared instead to be a message aimed at his fellow socialists, as well as the military power structure, that they could defuse Venezuela's long political crisis and hold on to some power if they turned against him. Doing so, U.S. officials argued, would end the mix of a broken economy, political repression and a mounting pandemic that has deepened Venezuela's national malaise. U.S. officials have long suggested as much to key Maduro supporters through back channels, but hadn't done so publicly until the proposal Tuesday.

"This is an important statement, but it comes about six months too late," said Geoff Ramsey, Venezuela director at the Washington Office on Latin America. "This is the same proposal that the opposition made when the Norwegian government was facilitating credible negotiations with the Maduro regime last summer. The talks fell through in part because of a lack of clear U.S. support."

"We are taking the right steps to save Venezuela," he wrote on Twitter. "It is time, as I wrote yesterday, for the usurper to take responsibility and accept the offer made by the international community."

The U.S. plan calls for elected members of the National Assembly, from both sides, to sit on a five-seat "council of state" that would preside over the country until elections could be held in six to 12 months. The president of the transitional government would not be able to run in those elections. Maduro and Guaido would accept the council of state as the sole executive body during the traditional period.

The deal would require other major concessions, including the release of all political prisoners and an overhaul of the supreme court and electoral council, both of which Maduro now controls. Importantly, the military power structure could remain in place, as is, as would local governors and mayors. A commission would investigate "serious acts of violence" as far back as 1999. All would be covered by an amnesty law -- with the exception of those charged with "crimes against humanity."

In exchange, Venezuela would receive sanctions relief, a pledge of substantial humanitarian aid, including medical supplies, and help restoring its critically broken power and water grids. U.S. sanctions would be lifted only after a transitional government had been established and "foreign security forces" -- an apparent reference to Cuba's tactical agents on the ground -- had left Venezuela.

U.S. officials suggested that they would not like to see Maduro running in a new election.

Information for this article was contributed by Ana Vanessa Herrero of The Washington Post.