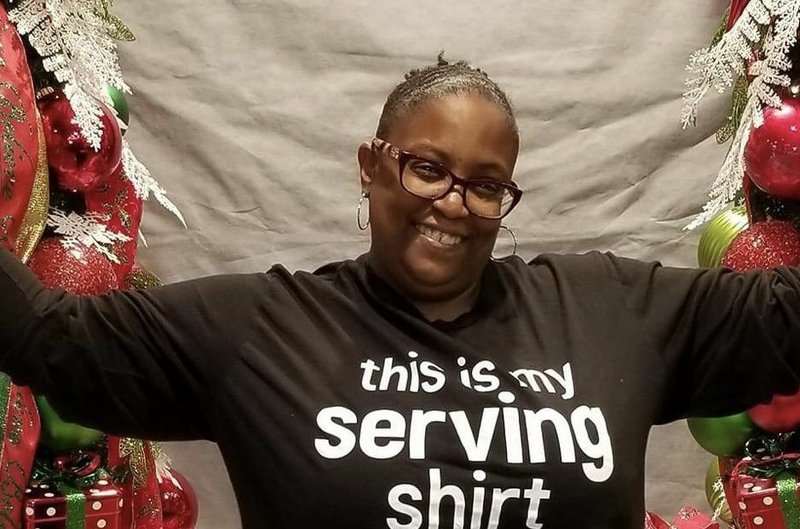 A 42-year-old Little Rock woman who died over the weekend from covid-19 was a healthy "hand-sanitizer queen," according to her family, who are now calling for a statewide order to keep people in their homes to better contain the viral pandemic.

The death of Tanisha Cotton also shows that the coronavirus risk isn't restricted to old age or aggravating health conditions. It isn't always deterred by any number of precautions an individual takes, her family said. Her story demonstrates the urgency of accurate testing and shows how rapidly someone's health can nose-dive.

Failures of communication and testing kept Cotton in the dark about what she was facing until it was too late, her sister LaTia Wright believes.

"She was not given a chance to even fight for her life," said Wright, a 34-year-old respiratory therapist who is treating people presumed to have covid-19. "That's how I see it."

Cotton is the youngest resident, as of Tuesday, to die from the coronavirus in Arkansas. The next-youngest was 59.

Cotton felt ill off and on for a week, then intense shortness of breath compelled her to report to Saline Memorial Hospital's emergency room on March 24, Wright said.

By the time her sister arrived, an X-ray showed that Cotton's lungs were filled with fluid, Wright said. She died four days later.

Wright has been piecing together information since her sister's death by talking with her former co-workers, she said.

Wright believes that a false negative covid-19 test for one co-worker contributed to Cotton's not seeking a test of her own until she was admitted to the emergency room, Wright said.

Additionally, Wright said she believes Cotton's Little Rock employer, Carlton-Bates Co., knew for a week before telling workers that an out-of-town visitor who met with its staff on March 11 had been exposed to covid-19.

Will Ruthrauff, a spokesman for the electronic supplies firm's parent company, WESCO International, said he was "unable to comment" when asked what the company knew and when, and how many workers had been infected.

At least four of Cotton's co-workers have since tested positive for covid-19, and two others were awaiting results, according to an internal email obtained by the Arkansas Democrat-Gazette.

The Little Rock office's general manager, Chris Wadsworth, expressed "great sadness" when he notified the company of Cotton's death in the email dated Monday at 8:01 a.m.

"As soon as we were notified of Tanisha's illness, we shut down the facility and cleaned all areas in the office space and the warehouse this past weekend," the email says. "We continue to take every precaution to ensure that we are not exposed to the virus and ask you to continue to wash your hands and follow all of the CDC recommendations that we have posted throughout the facility."

Wright called on Arkansas to join at least 33 other states that have issued "shelter in place" orders, casting her sister's death as an alarm screaming for politicians, employers and the general public to heed the danger.

"I've been battling this on the front lines -- that's why I can speak from both ends," Wright said. "We need to [shelter in place] before we lose another daughter, another sister, another close friend."

Gov. Asa Hutchinson has banned Arkansans from gathering in groups larger than 10, and has repeated federal "social distancing" guidelines that advise Americans to work from home if possible and avoid close contact with others.

On Tuesday, Hutchinson said the policies appeared to be working because the rate of infections in Arkansas has fallen short of projections.

When asked about a more restrictive lockdown, Hutchinson has said it would be difficult to implement, especially over a long period of time. Health Department Secretary Nate Smith, the point man on the state's coronavirus response, has said he hasn't seen evidence that it would help more than hurt.

States and cities that have issued shelter-in-place orders are commanding residents to stay at home and avoid public spaces, with some exceptions. Trips to the grocery store or doctor's offices are typically allowed.

Wright, who declined to name the hospital for which she works, provided a detailed account of her sister's final days, from the onset of symptoms to her final breath.

Cotton is survived by three sisters and her mother.

Her only underlying health condition was acid reflux, for which she took medication, said Wright, who first spoke publicly about her sister's death last weekend in an interview with Fox-16 KLRT.

Over the course of two half-hour interviews with the Democrat-Gazette, Wright provided a detailed account of her sister's final days, from the onset of symptoms.

Smith, the state's Health Department leader, said Tuesday that the country's experience with covid-19 has shown that "even young people without underlying conditions can become seriously ill and even die."

"Of course the risk is much higher for those who are older or have underlying conditions," with those who are both elderly and have chronic health problems facing the highest risk, he said.

A Health Department spokeswoman said the agency cannot comment on specific patients and was not immediately able to answer whether the agency is tracking the rate of "false negative" tests.

Cotton initially reported to Wright that she felt ill on March 17, a Tuesday: a "common cold," as she described it. One of her co-workers had also shown signs of illness.

Carlton-Bates' office staffers had been told that they had the option to work remotely at that time, Wright said. Cotton continued going to her workplace of five years, where she worked as a sales administrator.

The company instructed its office staff on March 20 that it should begin working remotely the following Monday, March 23. Cotton gathered her things and dropped them off at her mother's house so she did not have to isolate in her apartment, where she lived alone.

Also on March 20, one of Cotton's co-workers was tested for covid-19. The details on when the results came back are unclear, Wright said, but the test registered negative and Cotton was aware of it.

Cotton reported Saturday that "this quote-unquote cold was getting the best of her," Wright said. The next day brought some relief, and Cotton went out to get materials to fix her car tire, which had been punctured by a nail.

While staying with her mom, Cotton was sure to cough into her sleeve. She and her mom -- who has not been tested, but has not shown symptoms -- communicated mostly by phone or text.

Cotton began work from her mom's home on March 23. Instead of eating lunch, she took a nap. She lay around that evening, her knees ached and she seemed feverish. She did not have a thermometer, and stores were out of stock. Cotton wore a hooded jacket pulled over her head and zipped up, Wright said.

All the while, Cotton was taking Tylenol to treat her symptoms.

Wright met their mom Tuesday morning and gave her a thermometer. Cotton's fever was 102 degrees, Wright said. By that evening, Cotton reported that merely walking across a room sapped her breath in a way that felt like she had been running.

"Go ahead and pack your things," Wright told her, "and I'll meet you and mom at the emergency room."

When they arrived at Saline Memorial on March 24, Cotton's oxygen levels were low. She was administered 4 liters of oxygen. She was swabbed for flu, strep throat and the coronavirus. Technicians ran an X-ray on her chest and a scan for blood clots.

Cotton mentioned then that her co-worker's covid-19 test had came back negative. According to Wright, after Cotton's test results came back positive, the co-worker's sample was retested and confirmed a covid-19 infection.

Meanwhile, the X-ray results were troubling, Wright said, noting that they were "whited out," indicating her lungs had filled with fluid. By that time, it was the wee hours of Wednesday morning, March 25.

Her oxygen levels continued to lag, so Cotton was administered two more liters of oxygen -- six total. Nurses inserted a catheter so she would move as little as possible because every movement dropped her levels, Wright said.

Cotton did a video phone call with her sister around 8 or 9 p.m. Wednesday. She was wearing a mask designed to deliver large amounts of oxygen. Cotton called Wright to tell her she was going to be put on a ventilator.

"I promise I will check on you around the clock," Wright said.

Cotton's doctor called 20 minutes later and said she was intubated with no problems and was resting. But he was concerned about "how quick the turn of events happened," Wright said.

Cotton's quick decline was not uncommon.

A new round of chest X-rays Thursday morning showed that Cotton's lungs had cleared up slightly, Wright said. She was largely stable until Friday night, when her kidneys began to struggle. Her kidneys were still failing as of early Saturday morning.

Around 9 a.m., while Wright was at work, she received a call: Doctors were struggling to maintain her sister's heart rate. They'd lose it, restore it and lose it again. Wright left for Saline Memorial and was pulling into the parking lot when the doctor called back.

"The doctor was in tears because he stated he did not see this coming like this," Wright said. "He was pretty much emotionally wrecked because he tried everything, textbook perfect, and was still unable to save my sister."

Cotton's time of death was 9:35 a.m., according to the coroner's report.

Information for this article was contributed by Andy Davis, Kat Stromquist and Lisa Hammersly of the Arkansas Democrat-Gazette.