Freeform's Motherland is bewitched by witches 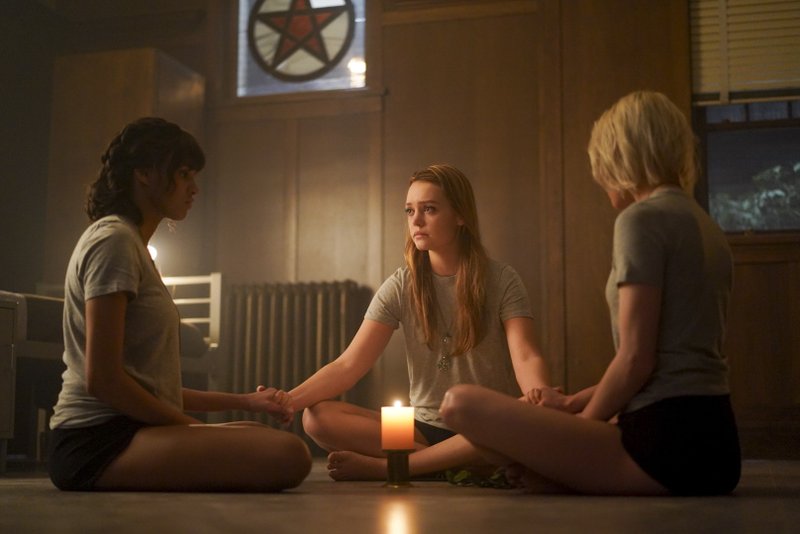 In this image released by Freeform, Ashley Nicole Williams, from left, Jessica Sutton and Taylor Hickson appear in a scene from "Motherland: Fort Salem," premiering Wednesday, March 18, at 9:00p.m. ET/PT on Freeform. (David Bukach/Freeform via AP)

NEW YORK -- Anyone tuning in to the new TV series Motherland: Fort Salem will find a few changes in the America depicted. For one thing, women are in charge of the military. For another, they're all witches.

Freeform's 10-episode first season is set in an alternate, present-day United States where magical women make up the armed forces and are fighting a shadowy terrorist threat. It's a TV show like no other. Think of Charmed mashed with The Man in the High Castle.

It's the brainchild of creator and executive producer Eliot Laurence, who said the idea came to him years ago like a lightning bolt -- witches plus military. "I had not seen that. And who knows? In the history of fantasy writing, I'm sure many people have tackled this combo. But for me, it felt very new," he said. In his world, witches ended their persecution 300 years ago by cutting a deal with the fledgling U.S. government -- in exchange for fighting for their country, witches would no longer be burned at the stake.

It's an ambitious step from Laurence, whose last project was Claws, a crime dramedy set in a Florida nail salon. He has always loved speculative fiction and is a big fan of sci-fi writer Octavia E. Butler and The Handmaid's Tale creator Margaret Atwood. "I'd always love that stuff, but I'd never tried it. I'd primarily written in the kind of darkly comedic world," he said. "So this was just sort of letting go in my internal nerd river of world-building and just having so much fun."

Motherland: Fort Salem follows three young women from basic training in combat magic to deployment on the front lines. It stars Taylor Hickson, Jessica Sutton and Ashley Nicole Williams. The three young witches learn to work together to hone their raw magic, which includes control over weather and using their voices as a shield or to pierce through metal.

"I don't want this to become another teen show," Laurence said. "I don't want it to be a show about attractive young people with powers. It's so much deeper than that."

The three heroines are a mix of races, classes and sexuality, but in this America none of that matters. "In this world, little petty stuff like gay or straight or black -- all of this stuff crumbles in the face of the fact of witchhood."

Creating this alternate reality gave Laurence a chance to rewrite American history. In this world, the emancipation of slaves took place much earlier, black witches are the military elite an American Indians have secured a lush swash of the nation along the Mississippi River.

"It's just about getting inside the terrible history of our country and kind of opening it up and looking at it in new ways," he said. "It's just fun to poke around and be provocative with that stuff."

Hickson calls Laurence "incredibly inventive" and had a million questions after reading the pilot. "I had to know more," she said. "I was really attracted to how Motherland pushes boundaries. It's like history and these real, relevant issues had a love child."

Laurence originally thought his idea about a witch army might be fodder for a book. He wrote it in a diary form, with each young woman writing her story in alternate chapters. But he couldn't sell it.

A few years ago, executive producer Kevin J. Messick realized the TV landscape had changed and Laurence's concept would make a provocative series. The original book became the source material. "He had five books in his head all mapped out so if this thing works, he's loaded with great ideas for a while," said Messick, calling Laurence a "genius." "The idea of strong young women fighting for America who have magical powers and it's dramatic -- it feels weighty."

In his world, new witches are drafted into the military at 18 and serve for life. But there is a rebel faction in the society that believes conscription like this is a form of slavery and is waging a violent terrorist-style campaign.

Laurence has gotten incredibly specific in his world-building, even down to explaining that one sound weapon the witches use is "a site-specific rapid conjuration impact-absorbing shield created by layering two complicated seed sounds subvocally."

"I like making up magic," he said, laughing. "I got some kind of nerd DNA where just those kinds of making up magical powers is just a very joyful place for me."