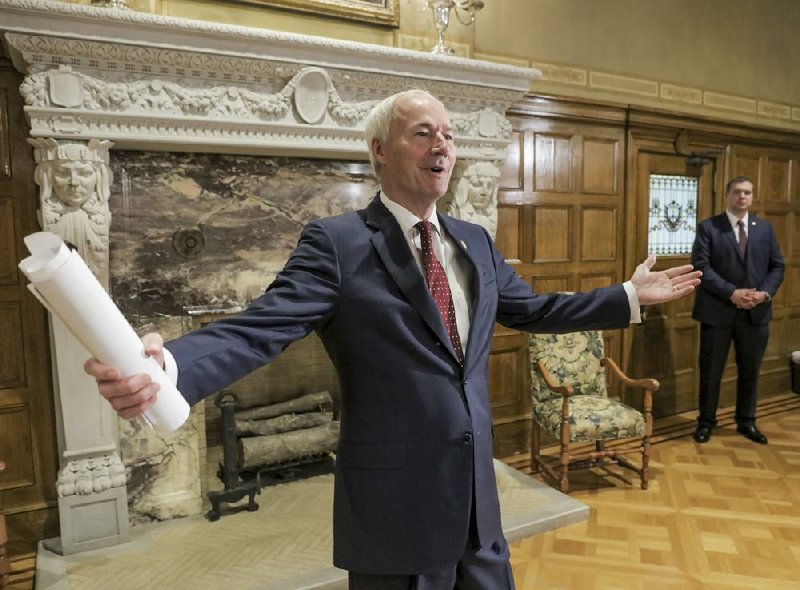 Gov. Asa Hutchinson speaks to reporters after wrapping up the Thursday update on the state’s coronavirus response at the Governor’s Conference Room in the state Capitol. (Arkansas Democrat-Gazette/John Sykes Jr.)

Gov. Asa Hutchinson on Thursday continued to resist calls for a statewide stay-at-home order as the deaths of two more Arkansans from the coronavirus infection were reported, including the death of a second resident from the illness at a Little Rock nursing home where dozens also have been infected.

The state's death toll from the virus rose to 12 while the number of cases went up by 59, to 683. The first case in the state was reported March 11.

Hutchinson argued that restrictions the state has in place are working to slow the rate of infection. A broader order would accomplish little while creating confusion and putting 100,000 Arkansans out of work, he said.

At a news conference at the state Capitol, he displayed two images, one after another, on a large television screen.

The first was a chart showing the number of positive virus tests trending below last week's projection by state health officials.

The second was a color map showing Arkansas was one of only a handful of states that has yet to issue a stay-at-home order.

The map "is not helpful to us, because it gives people an unrealistic expectation as to what this means, first of all and secondly, the impact of it," Hutchinson said.

"It gives the impression that we're really not doing as much as we should be in Arkansas, when you can see from the targeted response that we're doing a great deal, and it has been having some success."

[Video not showing up above? Click here to watch » https://www.youtube.com/watch?v=DL7UhsEufm4]

According to a count by The New York Times, 38 states had statewide stay-at-home orders as of Thursday. Similar orders were in place in parts of seven other states.

Hutchinson also displayed a list of steps he has taken.

Those include closing public schools through at least April 17, limiting restaurants to takeout and delivery only and indefinitely closing movie theaters, bowling alleys, casinos, hair salons and other businesses.

In response to Hutchinson's request a day earlier, the National Park Service on Thursday closed the Buffalo National River to visitors.

"Right now, their business is probably down 80%, [according to] reports I get, but they're able to use some employees to serve a minimal number of customers and also to do their online shopping," he said.

He said a stay-at-home order would create confusion about which businesses can stay open.

California's order, for instance, directs residents to stay home unless they are needed on the job to support "critical infrastructure."

A 13-page document by the U.S. Department of Homeland Security's Cybersecurity and Infrastructure Security Agency lists hundreds of classifications of workers whose jobs are considered essential, including those who work in health care, law enforcement, agriculture, grocery stores, utilities, transportation, plumbing, electricity, media and other fields.

Residents also are allowed to leave for other necessary trips, such as to the grocery store, pharmacy or doctor's office.

If he instituted a stay-at-home order immediately, "over 700,000 Arkansans would get up and go to work" the next day, he said.

Meanwhile, he estimated that 100,000 Arkansans would lose their jobs, adding to the tens of thousands who have already been laid off.

"We're trying to make good judgments based upon good public-health data that is scientifically based and that makes sense in Arkansas," he said.

Repeatedly pressed on the issue during an interview earlier Thursday on the National Public Radio program 1A, Hutchinson made similar arguments.

"Do you want to be the last governor in the country to impose a statewide stay-at-home order?" host Sasha-Ann Simons asked him.

"Well, I think you just ignored everything I just said," Hutchinson responded. "Whenever they talk about it nationally, they want us to follow the social-distancing guidelines, which we were doing in the state of Arkansas.

"They want us to make sure we don't have gatherings of more than 10 people. We're doing that. We have restricted activities that hurt us in terms of increasing the spread. So we're doing all of those things."

RATE SAID TO FLATTEN OUT

Health Department Secretary Nate Smith said coronavirus cases are increasing in every state, including those that have implemented stay-at-home orders, and the rate of growth in Arkansas "has at least recently flattened out."

Such orders might make more sense for a more densely populated state, he said. But so far, he said, they haven't proved to be effective in other states or countries where similar orders have been implemented.

Rep. Denise Garner, D-Fayetteville, said in a statement Thursday that the restrictions in the state haven't gone far enough.

"We need to act decisively now, so that we can minimize the duration and long-term impact of this virus," Garner, a retired nurse practitioner, said. "While our efforts so far have made some difference and have been well intentioned, it's clear that far too many people are disregarding guidance to stay home and avoid crowds.

"Arkansas needs to focus on shutting down all but essential activities, providing food and economic support to people for the duration of the crisis, and then on rebuilding and restarting our economy. With each day we delay, we are making our own crisis worse."

Dillard's spokesman Julie Johnson Guymon and Hutchinson's office didn't respond to an inquiry about whether Dillard's has weighed in with Hutchinson on the issue of a stay-at-home order.

The retailer remains among the few department stores that haven't closed in the coronavirus pandemic.

It employs about 38,000 people, including 3,000 people at eight stores in Arkansas and its corporate headquarters in Little Rock, Guymon said in an email.

"We believe we can safely serve the customers who choose to visit us by strictly following [U.S. Centers for Disease Control and Prevention] guidelines," Guymon said in an email. She noted that all customers also can order from the company's website.

"We implemented ship from store in August of 2019 and this enhancement is serving us well in the current situation," she said.

Health officials in Arkansas and elsewhere have focused on limiting the spread of the virus so that hospitals aren't overwhelmed when infections peak.

Their knowledge about the spread of the virus has been limited by a scarcity of supplies to perform tests.

According to data from the Covid Tracking Project, which collects information from state health departments, Arkansas, as of Wednesday afternoon, ranked 34th among the states and the District of Columbia in the number of coronavirus tests it had completed in proportion to its population.

The 584 Arkansans who had tested positive at that time translated into a rate of 1.9 identified cases per 10,000 residents, the 35th-highest rate among the states and Washington, D.C.

With 10 deaths at that time, the state's number of deaths per 10,000 residents was the 38th-highest.

Smith said of the Arkansans who died most recently from the coronavirus, one was a resident of Briarwood Nursing and Rehabilitation in Little Rock and the other was a Central Arkansas resident under age 65.

A precise cause of death was not immediately provided, Hobbs said. He said his records, provided by the nursing home, showed only that the woman had been screened as positive for "exposure" to the coronavirus, rather definitively showing that she contracted the infection.

He said the woman's death was the only one of a resident at the home since 83-year-old Alice Jett died of covid-19 on Monday morning at CHI St. Vincent Infirmary in Little Rock.

A total of 37 residents have tested positive for the coronavirus, Smith said.

He said the number of nursing-home staff members there and elsewhere who have tested positive has risen to 24.

Those include 15 staff members at Briarwood; four at the Waters of White Hall, where eight residents have also tested positive; three staff members at the Villages of General Baptist West in Pine Bluff, where two residents have tested positive; one at Newton County Nursing Home in Jasper; and one at the Lakes of Maumelle Health and Rehabilitation.

Meanwhile, the Van Buren County coroner confirmed Thursday that the sixth person in the state who died of the infection was Samuel Stone, a 75-year-old member of Greers Ferry First Assembly of God Church, where more than three dozen members have tested positive for the virus.

According to his obituary, Stone died Sunday in his Fairfield Bay home.

Two other members of the church have also died: Bill Barton, 90, of Greers Ferry, who was a door greeter at the church, on March 24, and Terry Henderson, 73, of Edgemont the next day.

The infections of church members were discovered in the weeks after two out-of-state visitors led a children's event there March 6-8.

Out of the 12 people in the state who have died from covid-19, four were adults under age 65, and the others were older, Smith said.

As of Thursday evening, cases had been reported in 59 of Arkansas' 75 counties, including the first ever reported in Mississippi, Monroe, Ouachita and Sharp counties.

The number rose by 13, to 126, in Pulaski County, which had the highest total and largest increase.

The cases rose by seven each in Lonoke and White counties, raising the total to 13 in Lonoke County and 22 in White county.

In Cleburne County, where Greers Ferry First Assembly of God Church is, one additional case was reported, taking the county's total to 64.

The cases increased by two, to 42, in Benton County; by the same number, to 38 in Faulkner County; and by one, to 32, in Crittenden County.

Jefferson County had 49 cases, the same total as the previous evening.

The number of coronavirus patients who were hospitalized in Arkansas as of Thursday afternoon rose by 10, to 66, from a day earlier, while the number who were on ventilators fell by two, to 23.

The number of health care workers who had tested positive rose by seven, to 91. That total includes 10 physicians, 26 nurses and four nurse assistants, Smith said.

The others are a combination of licensed and unlicensed workers, and the Health Department is still gathering information on some of their job duties, Smith said.

By the evening, 50 people were listed as having recovered, meaning that at least a week had passed since they fell ill and that they hadn't had symptoms for at least three days.

Despite the number of people who have lost their jobs, Hutchinson said he didn't see a need yet to take action to prevent evictions.

"There is a practical moratorium already on evictions," he said. "The courts aren't open. The process servers are not going out doing that kind of contact."

He said he also had spoken to landlords and tenants who told him landlords are being "more than accommodating" to renters who can't make a rent payment for reasons related to the pandemic.

Once out-of-work renters gets their unemployment checks or disaster relief from the federal government, however, he said, they should pay their rent so that properties don't end up in foreclosure.

Information for this article was contributed by Francisca Jones, Bill Bowden and Eric Besson of the Arkansas Democrat-Gazette.

Gov. Asa Hutchinson, referring Thursday to a map showing Arkansas as one of only a handful of states yet to impose a stay-athome order, said it “gives the impression that we’re really not doing as much as we should be in Arkansas, when you can see from the targeted response that we’re doing a great deal.” More photos at arkansasonline.com/43gov/. (Arkansas Democrat-Gazette/John Sykes Jr.) 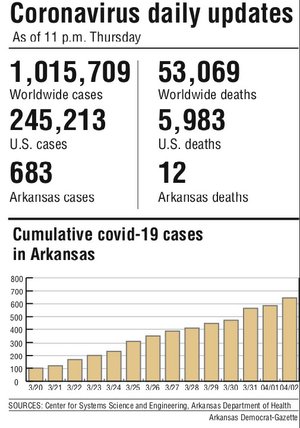