Succor for the shut-in: Murnau, Hitchcock and Remy the Rat 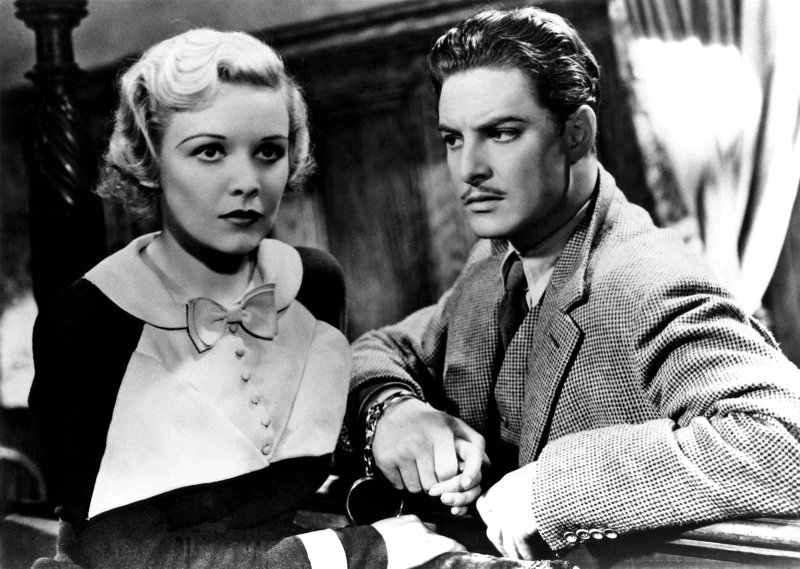 At the peak of her success in 1938, Madeleine Carroll was the world’s highest-paid actress. A few years later, after her sister was killed in the London Blitz, she largely abandoned her acting career to devote herself to helping wounded servicemen and children displaced or maimed by the war. She’s shown here with the suave Robert Donat, in a scene from Alfred Hitchcock’s The 39 Steps (1935).

Shut in as we are for the foreseeable future, there will likely never be a better time to hit some of the outstanding streaming possibilities at our fingertips, and fortunately enough, there have never been more available from which to choose.

In order to provide the most utility, we'll take the original 30x30 concept and tweak it a bit: We'll focus on a variety of genres from week to week to keep our bases covered -- everything from westerns, to sci-fi, indie dramas, art house oddities, and, yes, musicals. Also, every movie I list here is available in streaming format (listed), so consider anything higher than 5.0 as potentially worth your investment if you have to rent it. Set your mood and make your pick: Eventually, there will be something for nearly everyone.

1. The Cabinet of Dr. Caligari (1920): One of the earliest examples of German Expressionism, a counter-Hollywood movement founded in early '20s Europe that essentially distinguished Art House cinema from American Populism. Robert Wiene's film, concerning the malevolent Dr. Caligari (Werner Krauss), as he has trained a macabre somnambulist man (Conrad Veidt) in perpetual sleep to rise up and murder people in their beds, is filled with delightful oddball details, and filmed on a city set that looks out of a modernist painting in its theatricality. As with F.W. Murnau's Nosferatu, shot two years later, the makeup effects are extraordinarily evocative, rendering a nightmarish figure in Caligari whose peculiar and demonic visage burns into your deep subconscious (for reasons never explained, the space between the Doctor's upper lip, up to the bottom of his nose are darkened as if smeared with ink). As a film unto itself, it's fascinating enough, but as a progenitor of both noir and horror genres, it's absolutely essential viewing for cinephiles. Hollywood had already established the lockdown on star-laden, broad narrative sweeps, but refusing to compete with them helped establish the identity of European cinema, leaving the world a much richer place in the process.

2. Blow the Man Down (2019): One of those murder-in-a-small-town suspense jobs where literally the only reason the plot moves forward is that the main characters make unforced, nonsensical choices that lead them down much more fraught paths than necessary. Sophie Lowe and Morgan Saylor star as the Connolly sisters, a pair of young women whose mother has just died and don't know what's coming next. When one of them makes a misjudgment that leads to the death of a local creep (Ebon Moss-Bachrach) who works as a henchman of the town's local madam (Margo Martindale), there are the usual guilt/anxiety/duplicity calisthenics as the sisters have to cover their tracks (ludicrously badly, it turns out) and fool local law enforcement. Set in the upper reaches of Maine, the film does have a healthy bit of atmosphere -- although the weather between scenes runs from deepest winter to thawing spring and back again -- and a musical device that makes ready use of a group of singing fisherman, which bring a little edge of fourth-wall acknowledgment, but by and large it feels too quickly forced together, a bit like an elongated recap of a season of a TV show you didn't like all that much but felt compelled to watch until the last episode.

3. The 39 Steps (1935): Ten years into Alfred Hitchcock's feature-directing career, he produced this gem of a suspense thriller that became the virtual blueprint for the genre (revisited by Hitchcock himself multiple times, most notably in North by Northwest). Robert Donat plays Lieutenant Hannay, an innocent man who becomes embroiled in a counter-espionage caper when a curious woman (Lucie Mannheim) comes home with him after a near-riot at a local live theater. It just so happens the woman, Miss Smith, is being pursued by a pair of foreign thugs intent on stopping her from ruining their espionage attempt. After her untimely murder at his flat, Hannay has to go on the lam to thwart these nefarious spies from gaining valuable information against Britain in the build-up toward WW II, while also avoiding the authorities who wrongly believe he's the murderer. En route to Scotland, Hannay meets Pamela (Madeleine Carroll), who promptly gives him away to the cops, before deciding he's maybe on the level. As choppy as the existing print is, and as murky as the surviving sound mix may be (I had to use CC in order to make out what the characters were saying in certain pivotal scenes), Hitchcock's playful genius is on full display, including a cheeky edit from a woman's open mouth to a screeching train whistle, a direct POV shot from Hannay's perspective of one of his escapes, to a bit where he is forced to give a political speech on the fly to an enraptured crowd in a positively Fletch-ian moment. All of this builds into a comedic sequence with Hannay and Pamela handcuffed together in a hotel room, and the twisty ending, in which our battered hero finally figures out the scheme. Through it all, Donat's effortless charm (a trait revisited in spades by Cary Grant in To Catch a Thief), coupled with Carroll's moxie, proved a winning formula Hitchcock would turn to time and again.

4. Ratatouille (2007): As this is one of my daughter's and my favorite movies to watch together, and far and away my favorite Pixar offering, I'll just list some of my favorite bits and details from this thoroughly charming animated classic. "You don't have the guts!" Spoken by a passionate Parisian couple as Remy (Patton Oswalt), our rat protagonist, scurries past them behind the walls of their apartment.

Remi's adorable rat-sized omelet he makes for himself, having breakfast with his human benefactor, Linguini (Lou Romano).

The unintelligible noises of anguish Linguini makes after ripping his shirt open to reveal to Remy how their initial attempt at pairing the rat's culinary skills and his ... humanness ... has left his chest covered in little bite marks.

The sound of bread. And all the various cooking tips the movie sneaks into the narrative ("Keep your station clean," is one I constantly tell my daughter).

The sneering expression of the infuriatingly yuppie diner when he asks "What else do you have?" to the stammering waiter, tilting his head up so he can literally look down his nose at the man.

The film's swirling, colorful visual representation of how the pairing of different flavors come to be exponentially better than a single ingredient alone. Also, the way it frames true artistic passion in such rapturously joyous terms.

Literally everything about Anton "The Grim Eater" Ego, easily the best depiction of a critic ever recorded on film. From his coffin-shaped office (hat tip to my daughter) to his stiff-figured walk and menacing countenance ("Pray you don't disappoint me," he snarls at the waiter). But also the fact that his fierceness can be reduced to a touching wave of gratitude when something -- finally! -- passes his lips that evokes the comforting pleasure of food he experienced as a small child (what most of us critics are after in the first place, shhhh).

5. Tootsie (1982): Politically fraught as the film's premise may be -- a struggling New York actor impersonates a woman to get a role on a popular soap opera -- Sydney Pollack's early-'80s comedy is saved in large part in the unsparing manner in which it reflects back on the male protagonist -- and men in general. Dustin Hoffman, a couple of years removed from winning an Oscar for playing a beleaguered father in Kramer vs. Kramer (call it his "castigated male" phase), plays a hot-headed actor named Michael, who feels forced to land a plum role as a woman because he's considered radioactive by casting agents as himself. Fooling a bunch of witless men, including the soap's director (Dabney Coleman), is one thing. Where the film falters a great deal more is when Michael, now playing a woman named Dorothy, fools his co-star, Julie (Jessica Lange), which seems a great deal more of a stretch. Still, despite the usual gender-swapping high-jinks of the era (Michael starts worrying more about his figure; Julie's widowed father proposes to him), Pollack's film, off of a tart screenplay by Larry Gelbart and Murray Schisgal, pointedly makes Michael's artistic narcissism the film's driving force (part of the reason he takes Dorothy so far is that he really relishes the role). What could have been a condescending take on womanhood -- or worse, a men's rights diatribe -- actually becomes a more unflinching examination of the pushy neediness of men. Decades before #metoo, the film points out the constant horror of being a female in the entertainment industry. Not lost, too, is the ironic casting of Hoffman as the lead, an actor whose big break (The Graduate) came when he was already 30 and was considered too short to play a leading man. Bill Murray, of course, gets the single best line, but it has more wit to it than sass, which is a good thing. Other than some truly ghastly songs in the marshmallow soundtrack, courtesy of Alan and Marilyn Bergman, it remains a solid piece of work.

6. The Cabin in the Woods (2011): As far as the snarky postmodern horror genre goes (think Scream, Halloween H2O, and the like) Drew Goddard's blood-soaked fright fest (co-written and produced by Joss Whedon) goes to an entirely different level of meta -- and has a better and more successful time doing it than many of its predecessors. Whedon and company have created a nearly perfect vehicle for his particular brand of bloody good humor (unless you think the prospect of seeing a grisly, hillbilly zombie attacking a co-ed sounds uninteresting), which also takes into account an audience's insatiable desire to see beautiful, privileged young people get on the wrong side of a swinging bear trap. The result is a surprisingly sly and oft-hilarious riff on the rigid structure and standard tropes of the slasher genre, a bit like Six Characters in Search of a Homicidal Demonspawn. The surprising thing is how well the whole piece plays out, especially for nerdy pop culture sophisticates, who tend to eat Whedon voraciously and with a full set of Buffy utensils: You get the impression he and director Goddard had nearly as much fun sending up the genre as taking part in it. German auteur Michael Haneke might have made similar sorts of observations in his unrelentingly dark Funny Games, but he refused to let the audience in on the joke, preferring, instead, to use his cinematic pulpit as a scold. Whedon, meanwhile, through clever meta-writing and solid comedic chops, gets to have his bloody cake of good-natured nonsense and to eat it as well.

Print Headline: Succor for the shut-in: Murnau, Hitchcock and Remy the Rat