Medical force disparaged by U.S. is welcomed in virus zones by ANDREA RODRIGUEZ The Associated Press | April 4, 2020 at 4:44 a.m. 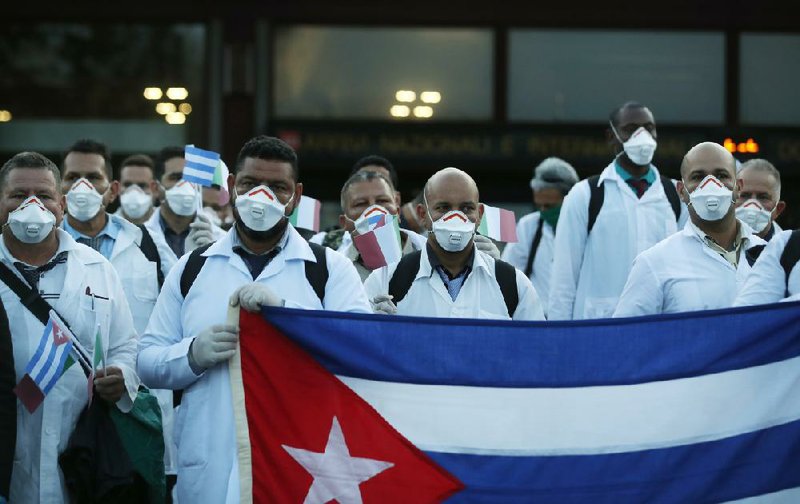 HAVANA -- For two years President Donald Trump's administration has been trying to stamp out one of Cuba's signature programs -- state-employed medical workers treating patients around the globe in a show of soft power that also earns billions of dollars.

Labeling the doctors and nurses as both exploited workers and agents of communist indoctrination, the U.S. has notched progress as Brazil, Ecuador and Bolivia sent home thousands after leftist governments allied with Havana were replaced with ones friendlier to Washington.

The coronavirus pandemic has brought a reversal of fortune for Cuban medical diplomacy, as doctors have flown off on new missions to battle covid-19 in at least 14 countries, including Italy and the tiny principality of Andorra on the Spanish-French border, burnishing the island's international image in the middle of a global crisis.

"I am aware of the position of the United States, but we are a sovereign country and we can choose the partners with which we are going to have cooperation," Andorran Foreign Minister Maria Ubach said.

In the city of Crema in the hard-hit Lombardy region of northern Italy, 52 Cuban doctors and nurses set up a field hospital with 32 beds equipped with oxygen and three intensive-care beds.

"This is a strongly symbolic moment because the Crema hospital has been going through an extremely complicated situation from the start," Lombardy's top social welfare official, Giulio Gallera, said at the inauguration last week. "The number of patients who have filled and continue to fill the emergency room and departments has truly put the medical personnel to a hard test."

The Trump administration has sought to cut off income to Havana as part of a long-term tightening of sanctions. And it continues to discourage countries from contracting Cuban medical workers despite the pandemic, arguing that their pay and conditions fall short of industry standards.

"The government of #Cuba keeps most of the salary its doctors and nurses earn while serving in its international medical missions while exposing them to egregious labor conditions," the State Department said last week on Twitter. "Host countries seeking Cuba's help for #COVID-19 should scrutinize agreements and end labor abuses."

Cuba currently has about 37,000 medical workers in 67 countries, most in long-standing missions. Some doctors have been sent as part of free aid missions, but many countries pay the government directly for their services. In some other cases, international health bodies have paid.

Havana has said it receives about $6 billion a year from the export of public services, and medical services make up most of that. When Brazil expelled Cuban doctors in 2018, a few details emerged including that the country had been paying $3,100 per month for each doctor with 70% of that going into the pockets of the Cuban government.

Doctors typically make less than $100 per month working on the island, so doing an overseas mission means a significant pay increase even if those salaries remain low by international standards.