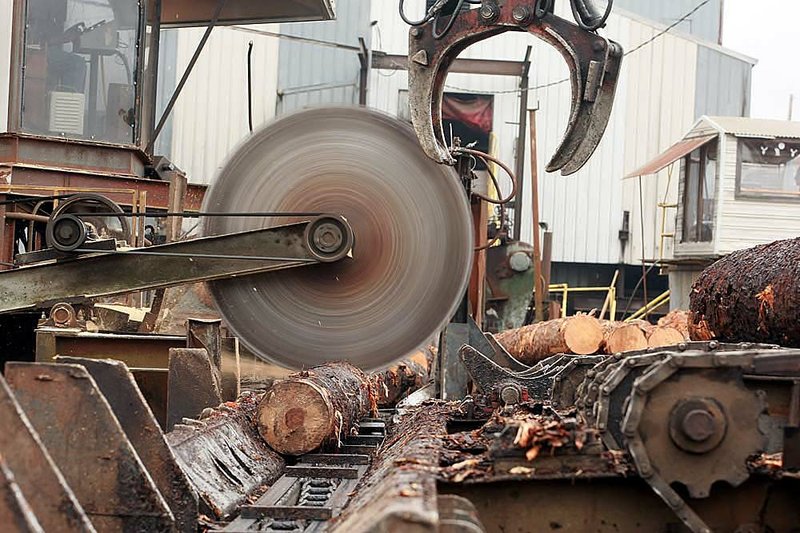 A pine log is cut as it begins its journey through the Anthony Timberlands sawmill in Bearden on Thursday.

Some 200 workers at Anthony Timberlands' pine mills in Malvern and Bearden will be laid off temporarily, in part because they prefer to receive unemployment checks that will be larger than their take-home pay, Steve Anthony, the company's chief executive officer, said Friday.

Anthony Timberlands has about 650 employees across its operations in Arkansas.

"It's such a fluid situation," Anthony said of the 200 jobs at stake temporarily. "We're hoping to implement all this next week but between now and implementation time, it could change completely." Arkansas Business on Thursday first reported the layoffs.

The plan, as it stands now, is to run one shift at the Bearden and Malvern mills, down from two shifts, Anthony said.

A little more than a week ago, Congress approved a $2.3 trillion stimulus program that includes $600-per-week checks to the nation's unemployed through July 31.

That sparked a lot of talk among workers in the Malvern and Bearden mills about possible layoffs and unemployment checks being bigger than their take-home pay, especially when the federal payment is on top of state unemployment benefits, Anthony said.

"A surprisingly large number said they wanted to work," Anthony said, although too few to keep the mills running at full capacity.

Regardless of the workers' sentiments, Anthony said, "I am certainly not going to think less of anybody for wanting a bigger paycheck."

In Arkansas, not including the boost that will be provided by federal money, the minimum weekly benefit is $81 and the maximum weekly benefit is $451, according to the state Department of Commerce. The current limit on receiving unemployment benefits in Arkansas is 16 weeks, although that also will be extended by the federal legislation.

Anthony said news coverage alerted him to the $600 federal unemployment benefits. "I think it said some [Republican] senators were balking at the unemployment provision ... on grounds that it would create unemployment," Anthony said. "As soon as I saw that, I immediately knew it was going to be a major problem."

Congress also approved a program to help and encourage "small businesses" -- those with 500 or fewer employees -- to retain those workers, along with full pay and benefits.

The program involves $349 billion in loans that will be forgiven if the proceeds are used to cover payroll costs, and most mortgage interest, rent, and utility costs over an eight-week period after the loan is made, and if employee and compensation levels are maintained.

At 650-plus employees across all its divisions, Anthony Timberlands Inc. isn't eligible for the Paycheck Protection Program, which is being administered by the Small Business Administration through local banks.

"We have three other affiliated companies, all of which are quite small," Anthony said, "but none will be eligible because of common ownership. The effect of that is they're not eligible but almost all of their competitors are."

While the market for pine lumber has dropped, markets for other Anthony products are OK for now though that could change anytime, Anthony said.

"This is a market problem. This is a virus problem This is an unemployment problem," Anthony said. "And all three are stacked on top of each other. It makes it difficult to run any kind of operation or business."