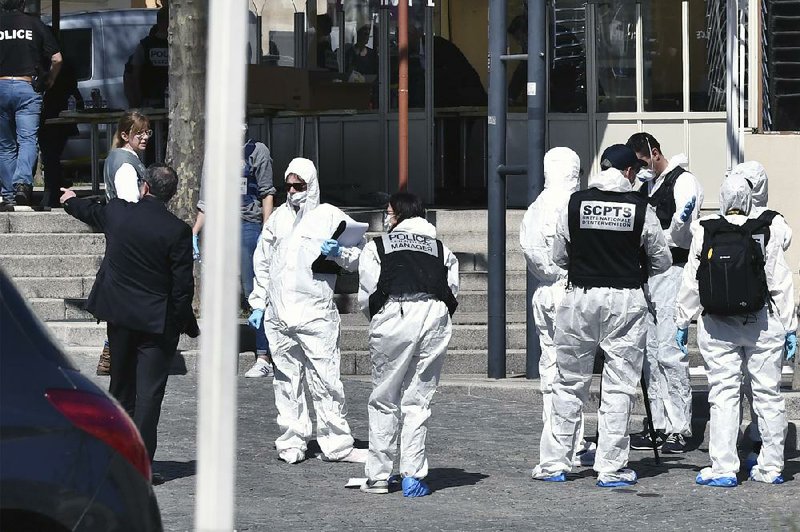 PARIS -- A man wielding a knife attacked residents of a French town while they ventured out to shop amid a coronavirus lockdown Saturday, killing two people and wounding eight others, authorities said.

Police later arrested the assailant nearby, French Interior Minister Christophe Castaner said, thanking shopkeepers for their help. Castaner said authorities were studying whether to qualify the attack in the town of Romans-sur-Isere as an act of terrorism.

While more investigating is needed, "it seems that all the risks have been neutralized" because of a quick police intervention, Castaner told reporters at the scene south of the city of Lyon.

Two people were killed and eight injured, he said. French media reported that three were in critical condition.

Prosecutors did not identify the suspect. They said he had no identifying documents but claimed to be Sudanese and to have been born in 1987.

The prosecutor's office did not confirm reports that the man had shouted "Allahu akbar" (God is great) as he carried out the attack.

The office said it was evaluating whether the attack was motivated by terrorism, but that it has not launched any formal proceedings to treat it as such.

Some 100 police and 45 firefighters were involved in the operation and securing the area, Castaner said.

Like the rest of France, the town's residents are on a coronavirus-linked lock down. The victims were carrying out their weekend food shopping on the street that has bakeries and grocers, the office said. Two-meter distancing is being encouraged as in the rest of the country.

Media reported that the knife wielder first attacked a Romanian resident who had just left his home for his daily walk -- slitting his throat in front of his girlfriend and son.

After that, they reported, the assailant entered a tobacco shop, stabbed the tobacconist and two customers, and then went into the local butcher's shop. He grabbed another knife and attacked a client with the blunt end before entering a supermarket.

HAVANA -- Cuban dissident Jose Daniel Ferrer was placed under house arrest Friday after a court sentenced him to 4½ years for assault and kidnapping but released him from the prison where he had spent the past half year.

Ferrer, a strong opponent of the island's communist government, is at the center of a dispute between Havana and Washington, which has called for the 49-year-old's liberation and described his imprisonment as a human-rights violation.

Cuba insists Ferrer and three other activists from the National Patriotic Union of Cuba dissident group imprisoned with him were guilty of common crimes and U.S. officials are using the case to stigmatize Cuba's government.

All of the dissidents were found guilty by the court and received sentences that were commuted to house arrest.

"It was a verbal notification," Ferrer said of the decision, speaking to The Associated Press by telephone from his home in the eastern province of Santiago de Cuba. The activist said he was taken from prison to the court where he was read the sentence.

"I am not going to comply with any of the rules imposed by the court," he said of the order not to carry out political activity. "I will continue with more strength than ever."

Ferrer went on trial in late February accused, along with the three other activists, of injuring and participating in the kidnapping of a Cuban man.

GUATEMALA CITY -- A second Guatemalan man has tested positive for covid-19 after being deported from the United States, Guatemala's Health Ministry said Friday.

The 49-year-old had been deported from Arizona. He was taken to a temporary hospital in Guatemala City.

On Thursday, three children who arrived aboard a deportation flight were placed under observation after they were found to be suffering from severe coughs, one of the symptoms of the virus.

Guatemala has expressed concern about deported migrants spreading the virus. Guatemala currently has 57 confirmed cases and one death, while the United States has more than 300,000 cases and over 8,000 deaths.

NIAMEY, Niger -- Four soldiers and 63 jihadis have been killed in fighting between Niger's army and heavily armed extremists in the nation's west, the government said Friday.

Extremists on motorcycles fought the army Thursday in the Tillaberi region near the border with Mali before being forced to flee, according to a defense ministry statement. The army was able to recover dozens of weapons and motorcycles, it said.

Since December, at least 174 soldiers have been killed in Niger in several attacks. At least two were claimed by fighters linked to the Islamic State group.

Extremism has grown in West Africa's Sahel region south of the Sahara Desert, with attacks increasing near the borders of Burkina Faso, Mali and Niger, where many jihadis linked to al-Qaida or ISIS operate.