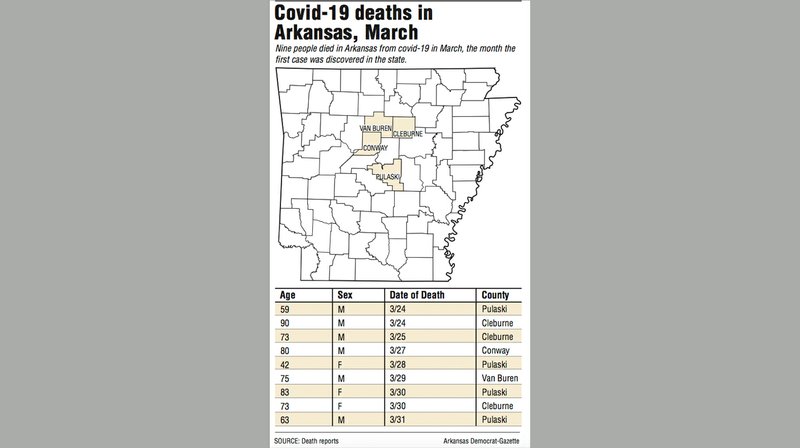 The oldest 90; the youngest a 42-year-old who according to her family had no previous health problems.

The new coronavirus and the disease it causes, covid-19, weren't detected in Arkansas until March 11, when state officials announced the first resident had tested positive.

Less than three weeks later, by month's end, confirmed cases had jumped to 564. And the first nine Arkansans were dead.

As deaths from covid-19 top 64,000 worldwide and 8,400 in the U.S., now is a chance to look closer at the first Arkansans felled by the disease. Who were they? Why might they have been among the first victims?

The Arkansas Democrat-Gazette contacted county coroners to obtain death certificates, the only publicly available records that contain names, addresses and cause of death. The newspaper has so far found that information for eight of the first nine, all of whom died in March.

In some cases, family members spoke about their loved ones' illnesses and gave permission to publish names. Where family members declined or couldn't be reached, names are withheld for this article.

While much is unknown about how the state's first victims contracted the disease, what's clear is the aggressive contagiousness of the new virus.

Three of the first nine victims were members of a small Greers Ferry church that held a three-day children's event in early March. Dozens who attended became sickened days later, according to the pastor.

Another who died resided in a Little Rock nursing home, where one case detected March 18 has spread to dozens of residents and staff members.

Age also has played a part. Seven of the nine Arkansans were older than 60, which experts say is a high-risk group for covid-19.

1. A 59-year-old Sherwood man, who died March 24. He was the first Arkansas resident known to die of covid-19.

The Pulaski County coroner's office said he had a "significant medical history" that included respiratory and cardiac problems. Little is publicly known about how he contracted the disease.

According to his obituary, he loved camping, hiking and spending time with family members. He also enjoyed travel and cheering for the Kansas City Chiefs. Survivors include a wife, two sons, a stepdaughter and grandchildren.

2. A 90-year-old Greers Ferry man, March 24. A door greeter at First Assembly of God, he was among at least 37 members of the Cleburne County church who have tested positive for the coronavirus.

Pastor Mark Palenske told the Arkansas Democrat-Gazette that he noticed several members were ill on March 11, three days after the church hosted a three-day "Kids Crusade" March 6-8. Many of the church's 80 members attended.

A Trumann native, this covid-19 victim picked cotton as a boy and retired, in 1984, as a maintenance supervisor from Northwestern Steel and Wire, where he worked for 33 years, according to his obituary.

He enjoyed hunting and fishing and helping his family, friends and church family.

Friendly and well-loved by church members, he tried retiring from his door-greeting duties. After 10 or 11 months, he told the pastor that stopping had been "no good. I've got to keep doing it."

3. An Edgemont man, 73, March 25. Like the church-greeter, he was a member of Greers Ferry First Assembly of God in Cleburne County.

His obituary, which acknowledged his death of covid-19 complications, said he was a Memphis native and an Army veteran who served in Vietnam. He retired from a Caterpillar Inc. plant in Peoria, Ill.

His daughter said in a Facebook post that her father thought he had the flu and "would just fight through it."

He declined to see a doctor until the church pastor, Palenske, tested positive for the virus. The Edgemont man's wife also contracted the virus but was expected to recover, his daughter said in her post.

His obituary suggested donations to the Covid-19 Solidarity Response Fund for the World Health Organization.

Survivors include a wife, two daughters and grandchildren.

4. An 80-year-old man from Morrilton in Conway County, March 27. A native of the Jonesboro area, he was a business operator in Arkansas and Michigan, owning roofing and wrecker companies and a bait shop.

His obituary described him as "quite the entrepreneur" and "family man."

An outdoorsman, his hobbies included golf, fishing and hunting.

5. Tanisha Cotton, 42, Little Rock, March 28. Cotton was the youngest person to die of the coronavirus in the state in March. She was a sales administrator for Carlton-Bates Co. in Little Rock.

An internal company email dated Monday , and obtained by the Democrat-Gazette, said at least four of Cotton's co-workers had since tested positive for the virus, and two others were awaiting results. 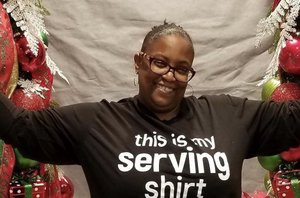 What Cotton originally thought was a cold gradually worsened until she was admitted to Saline Memorial Hospital, where she died, her sister LaTia Wright told the newspaper.

Wright -- a respiratory therapist who has been treating covid-19 patients -- spoke out about Cotton's death to stress the danger of the virus.

An announcement of Cotton's memorial service on Saturday said the gathering would be limited to immediate family members and livestreamed for others, following federal "recommendations and guidelines regarding funeral services at this time."

6. A 75-year-old man from Fairfield Bay in Van Buren County, March 29. His was the third death connected to the Greers Ferry First Assembly of God church.

He and his wife "were loved and blessed by all who go" to First Assembly, according to his obituary.

Originally from Elroy, Wis., the Navy veteran worked for 30 years at Chrysler in Belvidere, Ill., his obituary said. He "enjoyed people, laughing and teasing."

In recent years, he was a volunteer delivering food to shut-ins.

In addition to this wife, survivors include two sons, grandchildren and great-grandchildren.

7. Alice Jett, 83, Pulaski County, March 30. A worker in the Little Rock Police Department's 911 Communications Center for 25 years, Jett was the first known nursing-home resident to die of covid-19 in Arkansas. 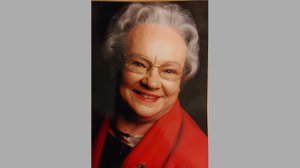 Born in Arkadelphia in 1936, Jett was a longtime resident of Little Rock who once owned a downtown restaurant called P.D.Q. She raised her three children as a single mother, according to her obituary, and had many grandchildren and great-grandchildren.

As of Friday, cases of covid-19 had been identified in 53 residents of seven Arkansas nursing homes, as well as several staff members.

Little is known about this victim, including her name.

Outside the 40-year-old company, Sinkey was known to be a quiet person who avoided crowds, enjoyed watching Western movies, working on his trucks and fixing up his North Little Rock home.

Survivors include a wife, three sons, one daughter and grandchildren.

Information for this article was contributed by Francisca Jones, Joe Flaherty, Kat Stromquist and Ginny Monk of the Arkansas Democrat-Gazette.