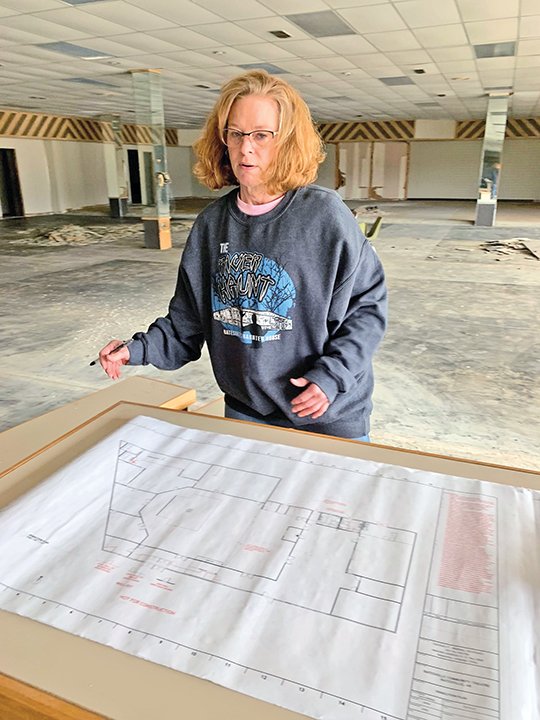 Suzanne Magouyrk looks at the remodeling plans for the new home of the Batesville Community Theatre in the Town Plaza Shopping Center on Main Street. ( Andrea Bruner )

In middle school, Jeremy Hall wasn’t interested in a lot of the extracurricular activities his classmates were involved in, but he said something happened in seventh grade that changed the course of his life.

His mother took him to see the Batesville Community Theatre’s production of The Wizard of Oz, and it was then that he found his niche.

“I remember getting in the car and saying, ‘I want to do that,’” he later told BCT leaders.

Hall is just one of more than 6,000 people who have been involved in the theater organization over its 49-year history. Alumni also include Belinda Allyn and Rebecca Anderson, who have both gone on to perform on Broadway, as well as a number of theater majors and others who have found a home either onstage or backstage.

Now a junior high choir director for the Greene County School District, Hall said he would not be where he is without BCT.

“They inspired this middle school student, and I know they will inspire many more,” Hall said.

In all its years, the theater has been without a permanent home of its own; however, that is until last year, when it purchased the old Van Atkins Department Store in the Town Plaza Shopping Center on Main Street.

The owners, the Murphy, Thompson, Arnold, Skinner & Castleberry law firm, sold the building to BCT while donating a sizable amount of the total cost to the theater, explained Tommie McDonald and Suzanne Magouryk, two of the nonprofit organization’s volunteers.

McDonald said her family moved to Batesville in 1977, and she tried out for her first play in 1980, landing the lead role in Annie Get Your Gun and starting a 40-year involvement with the Batesville Community Theatre.

“We’ve been trying to get a building for what we want, what we need, for years,” said Magouryk, who wears multiple hats, including serving as president of the Main Street Batesville Board of Directors.

BCT had looked at the old Bank of America and several other buildings around town but, for one reason or another, wasn’t able to secure a location until the old Van Atkins building fell into place.

“We came down and started trying to clean windows right off the bat,” Magouryk said, laughing.

With 1,700 square feet on the main floor and a basement for storage, the building sat empty for 17 years, although there was some “deconstruction” when the University of Arkansas Community College at Batesville had temporary plans to use the building, but those never came to fruition.

Van Atkins was actually added on to — twice — and with each expansion, the floor for the new area was built just a little higher, and ramps were added to access the original, lower part. BCT will keep the floor as is, so the audience will be seated on two flat levels, rather than on an incline, so the organization can also host dinner-theater events.

“Our largest performance has been Annie, both in the 2000s and the one we did two years ago, which was about 220,” Magouryk said.

McDonald said other performances, even A Christmas Carol, averages closer to 100 audience members per night.

Besides the auditorium, plans call for a reception space, and backstage, there will be dressing rooms and bathrooms, as well as a workshop.

Where Van Atkins’ men’s-wear section was once located, there will be classroom spaces, restrooms and a kitchen so that concessions can be sold during performances.

“We have so many people who come here and work so hard,” McDonald said. “Jeanette Gibbs has almost single-handedly scraped this entire floor. Some of us did a little, but she did so much. And Suzanne [Magouryk] is constantly hammering on something or climbing something.”

BCT also hopes to rent spaces to other groups in need of camp or class space throughout the year. The theater holds its own camps for children ages 6-16.

Beyond the stage performances, McDonald said, she hopes the new space will be utilized by various groups in the community.

“[The theater] will not accomplish its purpose if it just sits here between shows,” she said.

“We hope to have something every weekend, like open-mike nights or a piano bar,” McDonald continued. “How much we can do at once will depend on fundraising. If we have to wait on the kitchen, we’ll hang a curtain and wait on the kitchen. We do have to have a roof, air conditioning and plumbing before we can do anything. … And none of those things is cheap.”

BCT projects that it will need an estimated $1 million to make this dream a reality, so a capital campaign is underway.

McDonald said there will be an acknowledgment for major donors. A soft start on the capital campaign is already underway.

This will be the first permanent performance place for the community theater, although board members did build a metal storage facility in the 1980s, with help from a grant from Independence County.

McDonald said members of the organization are happy about the prospect of building sets in the same location as the stage.

“We don’t have to haul them across town,” she said, with Magouryk adding, “or lose some on the way.”

One time, volunteers were moving a huge doghouse set piece from BCT’s metal building in Southside to be used in You’re a Good Man, Charlie Brown, and [the piece] flipped off the trailer into the middle of the highway, McDonald said, adding, “We’ve had a few glitches.”

In front of or behind the footlights, the Batesville Community Theatre is dedicated to bringing a cultural experience so area residents don’t have to drive to Little Rock or Memphis, McDonald said. From drama to comedy, Shakespeare to fairy tales, dinner theater to children’s theater, variety remains front and center.

“In the ’80s, we did several musicals with an orchestra,” McDonald said, citing All That Jazz, Annie Get Your Gun, Camelot and Man of La Mancha. “And they were all back to back, and they were all huge productions.”

After the fourth one, BCT was in the red, Magouryk said, and productions became smaller, but Magouryk and McDonald said the 0rganization’s goal wasn’t profit.

“It’s more about the experience,” Magouryk said. “It’s about providing this experience and the fun, the art and the culture to our community, whether they’re backstage, participants or audience members.”

“We reuse everything,” McDonald said, explaining that the theater group was reusing and upcycling before the practice was fashionable.

“We have costumes that have been around since the ’80s and probably before,” Magouryk said.

When the local bridal shop was here, it donated several tuxes and dresses, and many of those have been refashioned for more than one production, she said.

”A Christmas Carol was really fun. David Norris rewrote the script [with more modern language] and added music to it,” Magouryk said, noting that BCT has actually done that one twice.

McDonald said a big musical might see as many as 300 people working, among the cast, crew, set construction, costumes, props, publicity, ushers, ticket sellers and more.

Magouryk estimated there were approximately 200 to 250 working on the production of Aladdin, including several students participating from West Elementary School when it had a visual/performing-arts focus. The theater has also had students in the casts of Mary Poppins and Nunsense.

Magouryk also said the organization works with local high schools to put on their own productions as well.

“Theater lovers love theater, so we all try to make everybody else’s productions and support them,” McDonald said.

“It’s really a labor of love,” she said. “This is Batesville’s community theater. We want Batesville to be involved and benefit. … We want to be on their radar, like the Melba, the [Jamestown Crag] and all of the Experience Independence ideas.”

McDonald said that in 2021, BCT hopes to hold an event acknowledging Batesville’s bicentennial. Local historian George Lankford wrote two acts of The Civil War Chronicles during the state’s observance of the Civil War sesquicentennial, and McDonald and Magouryk hope Lankford can write them an original piece to be performed or adapt what he or another local historian has already written.

Theater has a way of bringing out a star quality for so many introverts, McDonald and Magouryk said. McDonald talked about one young woman who “could not look you in the face and talk to you, and then you put her onstage, and it was just magic. … It’s interesting how [theater] lets those people blossom.”

“Before your very eyes,” Magouryk agreed.

More than once, they watched a young performer who they thought had no interest in theater, but once the student got onstage, “you could see the ham start to ooze, and by the second performance, they were just glowing,” added McDonald, who taught theater for 25 years. “They never dreamed they could do something like that; it was lots of fun to watch them find their stride.”

There was one young man in her class who moved here in the middle of a semester, and McDonald described him as “angry at the world.”

“He did nothing that year — and I mean nothing. He had no grades — until we did the play, and he helped, and he got into it. Well, he took [the class] again next year because he failed the first year, and he was the star. He loved it. We did Twelve Angry Men that year, and it just transformed him. It gave him a whole reason to go to school; it was wonderful,” McDonald said.

“It’s like sports; it’s a team effort,” she added. “You may have a star quarterback, but he wouldn’t be if he didn’t have a strong support system, and it’s the same with a performer.”

“This is their sport,” she said.