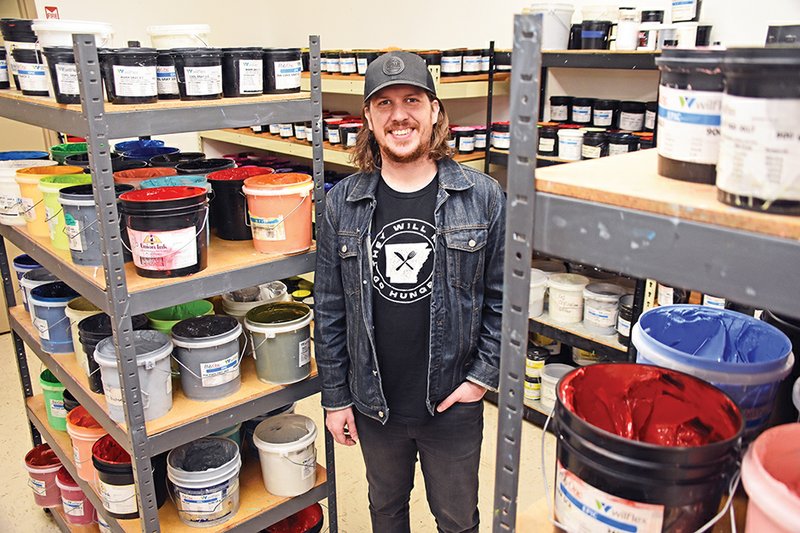 Caleb Harris, senior vice president of business development for Ink Custom Tees, stands in the ink room. Harris and the staff launched the They Will Not Go Hungry campaign and, in a little over a week, have raised more than $2,000 for food banks in Arkansas. ( Staci Vandagriff)

In a span of less than a week, Caleb Harris and the staff at Ink Custom Tees in Maumelle have put together a campaign to battle the growing hunger in the state.

Harris, senior vice president of business development for Ink, said Ink Custom Tees has been in the screen-printing business for 32 years in Arkansas and, in that time, has worked with special events and various nonprofits.

“We are hurting right now because of the lack of special events, but we are still here and working hard,” Harris said. “But we also realize there are others hurting more.

“When we learned some of the statistics about the Arkansas Food Bank and the need in the state, we were kind of blown away. So we came up with this concept, and in a matter of two days, we shot a video and launched a website.”

According to the website inkcustomtees.com/theywillnotgohungry, in the state of Arkansas, “over 63 percent of students rely on free or reduced-price lunch programs for their meals.”

“In the wake of COVID-19, these students and their families are struggling to have access to those regular meals,” Harris said. “Many of them have little or nothing to eat.”

In an effort to combat the need, Ink is selling custom T-shirts, with 50 percent of the proceeds being split among six food banks. Harris said that currently, Ink has sold 211 shirts, raising $2,110 in just over five days. Shirts are $20 each and can be purchased on the website.

“It is amazing,” said Rhonda Sanders, chief executive officer for the Arkansas Food Bank. “Ink is a great company. During this time, they felt like they could give back, raising money to feed children who may be on free and reduced-price lunches. … It is a pretty exciting campaign that they have put together.”

Sanders said she and her staff are working diligently to ensure that kids in need are getting meals at home. She said they have already provided 5,000 boxes in the two weeks since the schools have closed.

“This effort of feeding the kids touches thousands of children,” Sanders said.

Harris said a lot T-shirts have been purchased from out of state.

“They are wanting to provide for local families in need,” he said. “We’ve had orders from Texas, Florida and Kansas City — quite a few people from outside the state.”

“So if you live in Bryant and purchase a shirt, a percentage of [the proceeds from] that shirt is going to support students in Bryant, but also the state as a whole,” Harris said.

“All of us who have privately raised dollars to make this happen and leverage the need in the community is just what we need,” Sanders said. “To have the funding to provide the food and to get it to the kids is a wonderful campaign.”

Harris said he was pleasantly surprised by how “everyone has unified around the cause.”

“There is a lot of fear around that. I am pleasantly surprised at how people are turning their fear into a fight. Even today, multiple people are wearing their T-shirts and tagging us on social media.”

Harris thinks one of the reasons this project has grown the way it has is a result of the fact that it goes beyond one business and is, instead, focused on a mission.

“The shirts don’t have our own logo because we didn’t want it to look like we are hosting it. We wanted to look like it goes beyond that. It is Arkansans helping other Arkansans.

“I think that’s one reason why it has taken a life of its own.”

Harris said Ink is always looking for ways to give back, including assisting with Special Olympics and the annual Polar Plunge, as well as the foster-care and adoption systems in the state. He said because of the nature of what Ink does — designing shirts for retail brands, as well as nonprofits and ministries — they’ve grown inspired by their customers.

“We love to give back ourselves, and whenever Arkansas faces a tragedy, we are trying to be on the front lines,” Harris said. “We are inspired by the people we are working with all the time.”

He said COVID-19 is affecting their business, but it is also hurting their clients: ministries and nonprofits.

“We wanted to do something to help …,” Harris said. “There is such a great need, and we are in a position to where we could help.

“We have the facility, the designers and the Web people, and ironically, we have the extra time to give to a project like this in what would normally be one of our busier times. Because everything has been canceled or postponed, we find ourselves with time on our hands.”