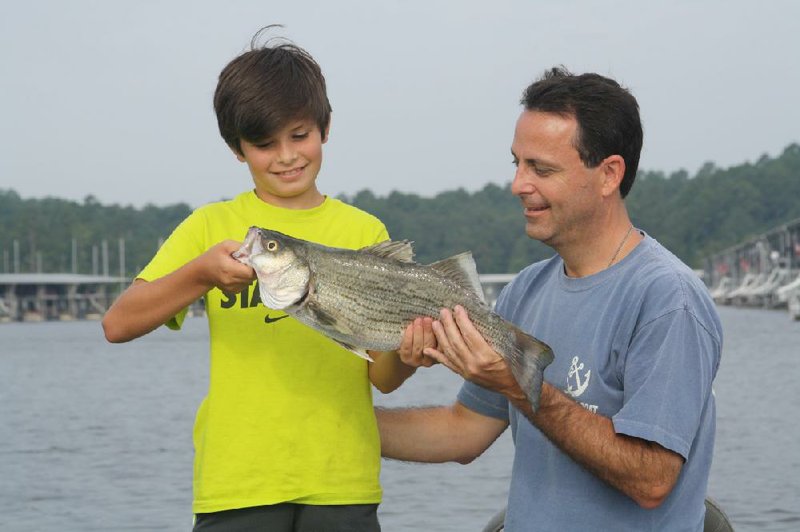 A fishing buddy told me about his friend that recently caught what he said was a 28-pound white bass/striped bass hybrid on Bull Shoals Lake.

"Twenty-eight pounds!" I exclaimed. "What did he do with it?"

"That's a shame because if that's true, he ate the all-tackle world record."

The current world record hybrid weighed 27 pounds, 5 ounces. Jerry Shaum of Fairfield Bay caught it in Greers Ferry Lake on April 24, 1997. I wrote it up for Outdoor Life after the Arkansas Game and Fish Commission certified that the fish was indeed a hybrid. That fish obliterated the record by such a huge margin that the Arkansas Game and Fish Commission sent a DNA sample to Auburn University to make sure it was indeed a hybrid. The AGFC never stocked hybrids in Greers Ferry, but anglers might have.

When I interviewed Shaum, a mount of the fish was on his wall, but only the side facing out was finished. The side facing the wall was unfinished and dull. Shaum said it was an economic decision.

It is possible that Bull Shoals harbors world-record class hybrids, but considering that "Bull" holds the world record for inland striped bass, we suspect that without photographic evidence, the guy caught and ate a decent-sized striper. Nevertheless, early April is the perfect time to catch hard-fighting hybrids on Arkansas waters such as lakes Hamilton, Greers Ferry, Catherine, Bull Shoals and DeGray.

Also, hybrids escape into the tailwaters of those lakes. One such place is the Ouachita River below Remmel Dam, where I caught a 14-pound hybrid before sunrise while fishing with Mark Roberts of Maumelle. That fish hit a Long A Bomber on the surface. The rig was an Eagle Claw Featherweight ultralight rod and a Shimano GT-51 baitcaster spooled with 6-pound test line. The fish nearly straightened several prongs on two of the treble hooks.

Again, because of its size, the Game and Fish Commission requested photos of that fish to confirm the species. The long body shape stumped the biologist, but she eventually settled on hybrid because of the fish's irregular stripes.

The white bass/striped bass hybrid comes from crossing the milt of male white bass with the roe of a female striped bass. The result is a compact but muscular and highly aggressive predator that thrives in the clear highland reservoirs of the southeastern United States.

They go by several names depending on location. North Carolina's state legislature officially named it the "Bodie Bass," in honor of a veteran outdoor writer named Bodie McDowell. McDowell's daughter, Lisa Snuggs, was a communications manager for PRADCO in Fort Smith in the 1990s. She is now the executive director for the Southeastern Outdoor Press Association in Badin, N.C. In other states, the fish are also known as "wipers" and "rockets." In Arkansas and Oklahoma, we just call them hybrids. 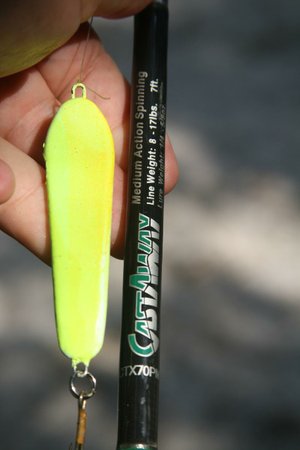 Like white bass, hybrids travel and hunt in big schools. You can catch hybrids and white bass on the same baits, generally following the same methods. Small grubs and swimbaits on lead ball-head jigs, small crankbaits, spoons and inline spinnerbaits are consistently productive.

The most exciting time to catch them is when they chase shad on the surface. That's when they'll smash topwater plugs, and it's one of the most thrilling strikes you'll experience in Arkansas. April hybrid fishing is synonymous with the late J.O. Brooks, a notorious hybrid fishing fanatic that chased hybrids on DeGray Lake every day with his friend Sam Richardson. Their method was simple but deadly. They used medium-action baitcasting rigs to launch Richardson's 2-ounce slab spoons. Richardson gave his spoons custom paint jobs, including one that he called "peanut butter and jelly." Mark Hedrick of Little Rock called it the "Peanut Butter and Jelly Sam-Rich."

If more than two people were in a boat, you paid close attention to your neighbor's casts because to catch a 2-ounce spoon against the noggin in a windup would cause a severe concussion.

Richardson's and Brooks' reels were old and not meticulously maintained. Their dry ball bearings screamed in protest under the strain of those massive spoons, but you can throw them darn near over the horizon. When the spoon splashes down, give it as much slack as possible and let it fall straight down. When it hits bottom, start reeling.

Richardson said that hybrids follow the spoon to the bottom. When the spoon rises, he said, a hybrid attacks it. I believe him because strikes almost always come as soon as you start reeling.

A hybrid strike is such a violent sensation. The fish is moving fast when it hits, so you feel a wrist-shocking shudder in your rod, and then the fight is on with a fish that weighs 4-9 pounds. It is a pulsing series of tugs when the fish is still far from the boat, but the battle intensifies closer to the boat. That's when a hybrid tears off on drag-scorching runs. You'd better set your drag right or the fish will likely break your line.

You can fish for an hour or more without a bite, but when they start feeding, it's like the "Christmas tree" turning green at a drag strip. The engines race and the tires squeal. You'll catch them on every other cast for as long as the feed lasts. When it's over, it ends as abruptly as it started. If you have good electronics, you might be able to find a feeding school somewhere else, but usually the fishing is done after the initial flurry. 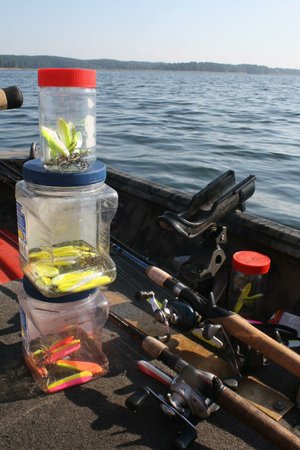 Fishing for hybrids on Greers Ferry is different. There, hybrids seem to run in bigger schools that feed on the surface more frequently than on DeGray. Experienced hybrid anglers wait for a school to surface and then try to get in front of it, allowing the school to come to them. They catch them with small topwater lures, small crankbaits, inline spinnerbaits and live bait.

It's happening right now, so get it while it's hot.