On the mend: Recycle old clothes 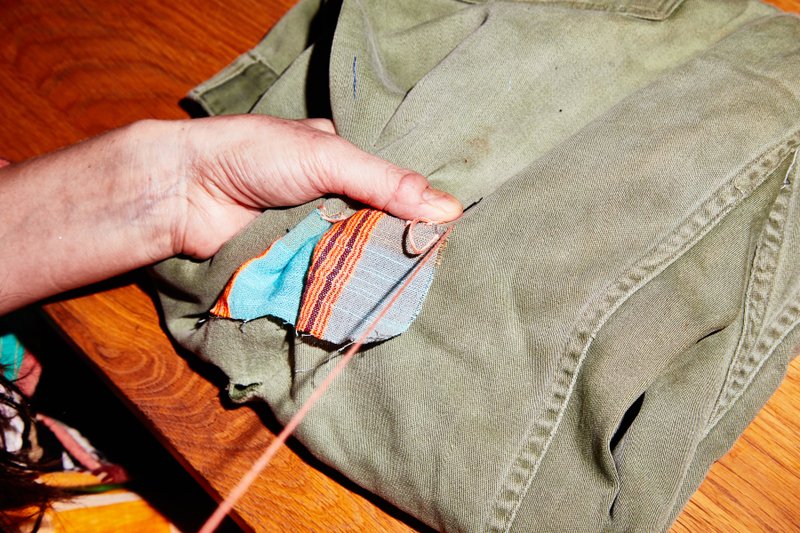 Cary Vaughan works on a visibly mended piece of clothing at the Brooklyn offices of Ace & Jig last month. “Visible mending” has been taken up by those who want to protest fast fashion and dispos- able culture. (The New York Times/Amy Lombard)

Only a few generations ago, socks were routinely darned, sweaters mended and pants patched. You could buy a sewing kit at any drugstore. Knowing how to use it was a mark of good housekeeping.

Kate Sekules, 58, remembers that world, in which the act of repairing clothes was integral to wearing them.

"My mother was a dressmaker to the end of her life," said Sekules, who grew up in England. "My mother just mended as a matter of course."

Sekules has kept up that thrifty tradition. She started one of the earliest secondhand online clothing exchanges, Refashioner. She buys all of her clothes vintage and mends them all, including her husband's moth-eaten sweaters.

But although sewing and knitting have made a modest comeback among hobbyists in recent years, those skills have in the main dropped away. Home economics is no longer taught in many schools; the sewing machine is no longer a whirring fixture in the home. Especially since the rise of fast-fashion chains, a tear in a shirt or dress often spells its end.

As a cri de coeur on behalf of needle and thread, Sekules practices and preaches "visible mending," as it is known in the sewing and fashion communities. On visiblemending.com she offers inspiration and instruction to the unversed and posts photos of creatively salvaged clothes. 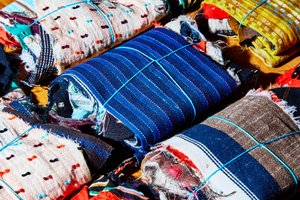 Patch kits are shown at the Brooklyn offices of Ace & Jig. (The New York Times/Amy Lombard)

Take, for example, the Dolce & Gabbana V-neck sweater she bought at a sample sale in the 1990s, misplaced for years and found again, only riddled with holes (caused not by moths, she said, but from "sheer age and sadness"). Sekules made a neat eyelet stitch using embroidery floss in a rainbow of colors to frame the half-dozen holes -- in essence, to call attention to them. The designer sweater had a folk-art look when she finished.

"I like the mends to look a little rough," she said. "If it looks like it came from a factory, it negates the point."

Showing off your patches, visible menders say, draws attention to the way a garment's life span has been extended. It also subverts the notion, long held, that mended clothes are worn by the poor, while the height of luxury is buying a new wardrobe every season.

"We're saying the opposite with our mended clothes," Sekules said. "The pride in the look of a mended thing, that's pretty recent. That's now."

Americans generated about 17 million tons of textile waste in 2017, which included carpets, footwear, sheets and towels but was mostly clothing. That is according to the most recent data from the Environmental Protection Agency; drill down and the numbers get even grimmer.

Only about 15% of textiles were recycled, meaning landfills received 11.2 million tons of municipal solid waste textiles that year.

Visible mending, then, is like choosing your mile of highway to pick up trash: It is a personal, small-scale, possibly futile response to the overwhelming problems of mass consumption and waste: "a quiet, global protest movement," in the words of Emily Brayshaw, a research associate at the University of Technology Sydney who has written about the growing practice.

Looking to the past, menders cite the rationing campaign in England during World War II, "Make Do and Mend." The current mood, it seems, is fret about the health of the planet and mend.

"You get that good feeling of, 'I'm not going to throw this away,' " said Hunter Hammersen, a knitwear designer and author of pattern books who practices visible mending. "I'm not going to buy another piece of fast fashion and have the guilt that goes with it."

Like many modern menders, Hammersen, 41, shows off her handiwork online -- including the holey gray cardigan to which she affixed tiny clusters of embroidered flowers.

On Instagram, hashtags like #mendingmatters and #makedoandmend mark tens of thousands of posts showcasing colorfully and often gorgeously patched sweaters, jeans, dresses and coats. Sashiko, the Japanese form of decorative reinforced stitching invented in the early 17th century, is as popular as ever.

There are numerous how-to books, such as Visible Mending: Artful Stitchery to Repair and Refresh Your Favorite Things by Jenny Wilding Cardon. And just released is Mending Life, by Nina and Sonya Montenegro, sisters who run the art collective the Far Woods. Also just released, Wear, Repair, Repurpose by Lily Fulop. And in September, Penguin will publish Sekules' own book, Mend! A Refashioning Manual and Manifesto.

Visible mending is also a practical response to the rising interest, especially among Gen Z, in buying and wearing secondhand clothes and upcycling, since used clothes often have flaws.

Katrina Rodabaugh, an author and crafting enthusiast in New York, became something of a heroine in this world when she pledged to avoid wearing new clothing for a year after the Rana Plaza garment factory collapsed in Bangladesh in 2013, killing more than 1,100 workers. She called her project Make Thrift Mend. (On a related note, Shinique Smith, an artist, uses recycled clothing to construct sculptures, paintings and site-specific installations.)

Rodabaugh offers workshops to teach mending. So does Celia Pym, a textile artist in London whose work was featured in "Don't Feed the Monster!," an exhibition last year at Galleri F15 in Norway that critiqued big fashion. For the show, Pym visibly mended a sweater with contrasting white wool.

Cardon, 48, who lives in Utah, had her mending revelation four years ago. A die-hard thrifter, she found herself passing on items because they had a rip or a hole. But then while on Pinterest she came across a photo of a sweater sleeve repaired with a small red patch sewn on with white thread.

"It was such a simple image," Cardon said. "But it spoke volumes to me."

Like Sekules and others before her, Cardon quickly found her way to Tom van Deijnen, a software engineer and accomplished home sewer who lives in Brighton, England. Van Deijnen, who goes by the name Tom of Holland (he is Dutch), is generally recognized as the popularizer, if not the inventor, of visible mending, and one of the first to use the hashtag.

For years, Van Deijnen, 46, has repaired his clothes, sometimes trying to make invisible repairs. It never worked out. "I thought, 'Well, I can turn that around and make it really visible,' " he said. "It allowed me to be more creative with garments as well."

About 10 years ago, he started a blog to promote his Visible Mending Programme, which basically involves him posting on social media and holding workshops, for which there is a fee, to teach mending skills. He also takes on commissions from private clients; garment repairs begin around $40.

Now fashion brands, perpetually in the business of convincing shoppers to buy new clothes, are also promoting longevity. Eileen Fisher, A.P.C. and Toast, to name a few, have programs for swapping, repurposing or mending clothes. In the fall, Ace & Jig, the women's label that makes its own yarn-dyed woven textiles, gathered up garments with tears or other flaws and had them visibly mended by skilled sewers before selling them online.

"It's a backlash to, 'I just want to get rid of it; I just want something new,' " said Jenna Wilson, a founder of Ace & Jig. "You do need a certain amount of new things. You just don't need as much."

Wilson and her business partner, Cary Vaughan, have also started selling patch kits made of leftover fabric, hoping to inspire their customers to creatively conserve the way Wilson's mother did growing up on a farm in rural Saskatchewan.

"They didn't call it visible mending," Wilson said, "but they sure did it."

While there are numerous techniques to the mend (darning, patching, appliqués, reweaving and so on), each is as individual as the person making it.

For Hammersen, visible mending is a political act but equally a meditative and low-stakes creative activity. "Doodling with thread," as she put it.

Van Deijnen sees wearing a visibly mended garment as a way for a self-described introvert to make a statement about fashion's throwaway culture. "I identify with that way of noticing," he said, of his clothes speaking for himself. "People can ask me, but I'm not there to shout in people's faces."

That's not to say menders can't be confrontational. When she wants to "get the conversation going," Sekules said, she puts on an old pair of engineer-stripe overalls that she repaired with red patches around the crotch -- "mendstruation," she calls the look.

"People laugh," Sekules said. "Or they're terrified and run in the other direction."