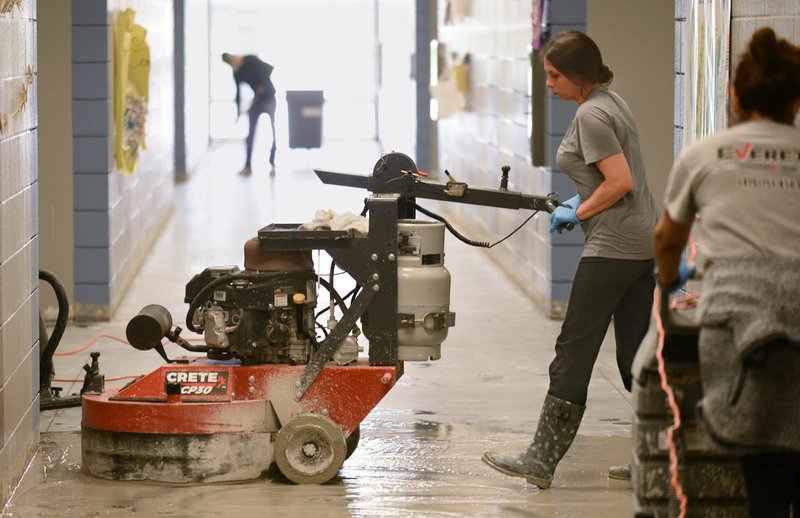 Charlene Simmons, a custodian with Springdale Public Schools, uses a concrete polisher Wednesday to grind off the surface of the hall floor at Linda Childers Knapp Elementary School in Springdale. The district is removing the carpet at the school and will replace it with stained concrete. Go to nwaonline.com/200402Daily/ and nwadg.com/photos for a photo gallery. (NWA Democrat-Gazette/David Gottschalk)

The absence of students and teachers makes it somewhat easier for crews to work, district officials said.

Northwest Arkansas’ four largest school districts — Springdale, Bentonville, Rogers and Fayetteville — have not laid off or furloughed any custodians as a result of the covid-19 outbreak. The custodians generally are busy with a variety of cleaning chores while schools are closed, district officials said.

The Rogers School District is in the middle of major renovation projects at Westside, Northside and Lowell elementary schools, and all three are on track for completion by this fall. The total cost of those projects is expected to be around $25 million.

The district also is building athletic facilities at Rogers High and Heritage High, projects estimated to total about $44 million.

The state's schools are closed until at least April 20 in response to the virus outbreak, so construction crews don't have to worry about disrupting the educational process, said Charles Lee, the district's assistant superintendent for general administration.

The closure is "something we certainly don't want, but for our construction companies, it has made it easier," Lee said.

Construction crews are following social distancing guidelines, and projects are on schedule, he said.

"At this point, completion has not been impacted," Lee said. "But if this thing continues to progress with more shutdowns, more quarantines, that could have an impact on us."

The Springdale School District is getting a head start on flooring projects originally scheduled for the summer break.

Some custodial staff members are ripping out carpet and replacing it with polished concrete in hallways at Childers Knapp, Harp, Hunt and Sonora elementary schools. They are staining the concrete as well to add color to the floors. The project takes about 10 days to complete at each school, said Jeremy White, Springdale's director of facilities.

The covid-19 shutdown "gives us a little more time to do some projects like that that we can't normally do until we have some downtime," White said.

"We do breakfast in the classroom, so the kids bring their food in," Covington said. "They do a great job of taking care of things, but sometimes accidents happen."

Other custodial staff members are busy cleaning and disinfecting the buildings. The maintenance staff is focused on filling work orders and performing preventative maintenance on equipment like playgrounds, heating and air conditioning systems and electrical systems, White said.

Springdale has 220 people on its custodial staff, and none have been laid off, according to Rick Schaeffer, district communications director.

Springdale's custodians normally work five days per week, but with schools closed, they are working five days every two weeks. Half of them work Monday, Wednesday, Friday for one week, then Tuesday and Thursday the next. The other half work the opposite set of days. All are being paid as though they're still working full-time, Schaeffer said.

The district has 41 facilities, including 31 schools, that are cleaned daily. There are never more than 10 members of the janitorial staff in any building at any time, Schaeffer said.

The virus outbreak also hasn't slowed construction at the Tyson School of Innovation, which will add 142,000 square feet, including a performing arts center. Part of it will open in August and part in December, White said.

The Elkins School District has two big projects going: a $1.5 million addition of six classrooms at the Primary School, and installation of air conditioning in the competition gymnasium.

C.R. Crawford Construction is handling both projects. The classroom addition is expected to be finished by the end of this month, and the gym project should be finished next month, said Phil Jones, C.R. Crawford's business development officer.

All workers on the job site are doing their best to maintain distance between each other, though that's sometimes difficult because some tasks require multiple people working closely, Jones said.

Every C.R. Crawford job site has information posted regarding precautions to take, and workers are advised to go home if they feel ill, Jones said.

The lack of vehicular traffic around the school -- parents picking up and dropping off their students -- makes the work a little easier for the construction workers, White and Jones said.

"We certainly wish school was still in session," Jones said. "But this does bring a little bit of help as far as managing around the job site."

Megan Slocum, associate superintendent for the Fayetteville School District, wrote in an email that the district is trying to minimize physical interaction between employees and calling them in only for essential needs. Any facility work being done is focused on outdoor work that doesn't require people to be together in an enclosed space, she wrote.

"Much of our focus has been on securing food, preparing, and distributing meals to our students," Slocum wrote. "As things move forward we will plan future work based on the needs of each facility and following [U.S. Centers for Disease Control and Prevention] guidelines."

The district is building Grimsley Junior High School, its fourth junior high, in Centerton. Grimsley remains on track to open this fall, Wallace said. Crossland Construction is managing the project.

"They've instituted protective measures for their workers, and everything is still going on strong out there," Wallace said.

Bentonville last month started the second phase of a renovation project at Lincoln Junior High School and is adding a locker room at West High School.

Wallace's department receives anywhere from 50 to 150 maintenance work orders per day when schools are open, he said. An extended closure of schools allows the staff to catch up, he added.

Bentonville outsources its custodial services to SSC Services for Education. All of the district's 130 custodians are working during the school closure. Many are deep-cleaning and sanitizing the empty school and office buildings. They also are completing spring cleaning-type tasks such as air filter changes and power washing, said Leslee Wright, Bentonville's director of communications.

Pentagon: U.S. contractor dies in rocket attack at Iraq base
by The Associated Press
Sharp County man gets life sentence in 2 killings
by Bill Bowden
Walmart to invest $350 billion in U.S. manufacturing
by Serenah McKay
Bail $1M for teen in shooting at Pine Bluff school
by I.C. Murrell, Joseph Flaherty
General details hourslong delay in getting Guard to Capitol
by The Associated Press
ADVERTISEMENT