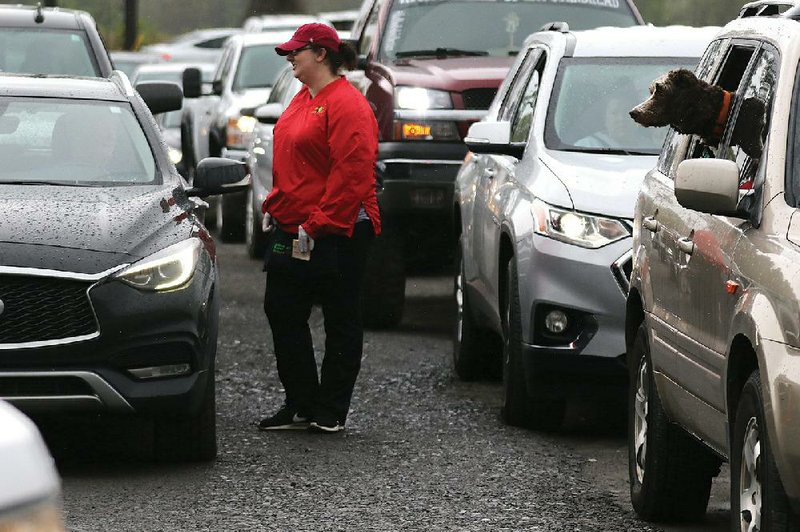 Holland Bottom Farm in Cabot caused quite a traffic jam Wednesday when it opened its roadside stand for the season to begin selling strawberries.

This year, to maintain social distancing for its customers and employees, it's selling drive-thru only.

Cars lined up for miles in both directions on Bill Foster Memorial Highway West waiting to enter the roadside stand, according to co-owner Leslie Odom.

"I believe we were all the way up to the stoplights up there," she said Saturday of the traffic. "I don't know for sure, but I think we had it blocked in both directions where no one could move."

The Odoms normally have an area for people to park near their stand. The customers get out of their cars and get in line to buy strawberries, a spring ritual for many.

But this year, with businesses like restaurants moving exclusively to to-go orders to keep people from congregating, Holland Bottom Farm is doing its part.

"This year it's been different because we've been doing just the drive-thru only," said Leslie Odom, who co-owns the business with her husband, Tim. "I mean, it's going good, but it's a work in progress. We learn new stuff every day," she said.

One thing they learned was an old fast-food drive-thru trick: more lanes mean less traffic backing up in the street. By Saturday, the farm had three lanes, and Leslie Odom said the day's traffic congestion was not nearly as bad as Wednesday's.

"The first day we just had the one line, and it was a learning curve for all of us," she said.

While part of the traffic is from people making their yearly dash for fresh strawberries, Leslie suspects that some of the traffic was from isolated-at-home people just getting out of the house.

"I think its all of the above," she said. "They're wanting to get ready for spring in Arkansas. I think it's just a combination of everything."

On Saturday, two police officers were directing traffic at the entrance to the stand. Leslie Odom said she and her husband have been working with the Cabot Police Department to make things go as smoothly as possible.

A lot of customers for the strawberries drive-thru, does not automatically mean business is booming, Odom said. The drive-thru operation requires more employees and with more employees come additional costs.

With a limited supply of ripe strawberries and added costs to sell them, the Odoms increased their prices by $1 this year. They understand that times are tough for many people though and are working to keep the prices down, Leslie Odom said.

The $1 "really did not cover the cost that we had to incur, but at the same time we know everybody's in a bind right now," she said. "Everybody's kind of hurting, so we just tried to get enough over to where we could at least continue doing it."

Despite some of the problems this year, Odom said she is receiving good customer feedback.

"We're always working on new ideas each day trying to make everything flow better," she said. "It is a work in progress."

Also, the workers picking the strawberries and those handing them out to customers are being told to social-distance and report even a minor illness to the Odoms.

"We've had several meetings about covid-19," Leslie said. "How to wash your hands, how to stay away from everybody -- we've had several of those. Everybody knows if they even start doing a little bit of a sniffle [to] come on up."

Lyndi Whitlock has worked at Holland Bottom Farm for three years and said other than the drive-thru, the operation hasn't changed much.

"It's always been this busy, like this every year especially the first weekend," Whitlock said.

Whitlock said she is taking seriously all of the health precautions. She is wearing gloves and washing her hands any chance she gets.

Leslie Odom said gloves have been hard to come by, and the only reason workers had them Saturday was because she was "lucky" enough to track some down.

"They're sending them [gloves] to the front line, which I understand," she said.