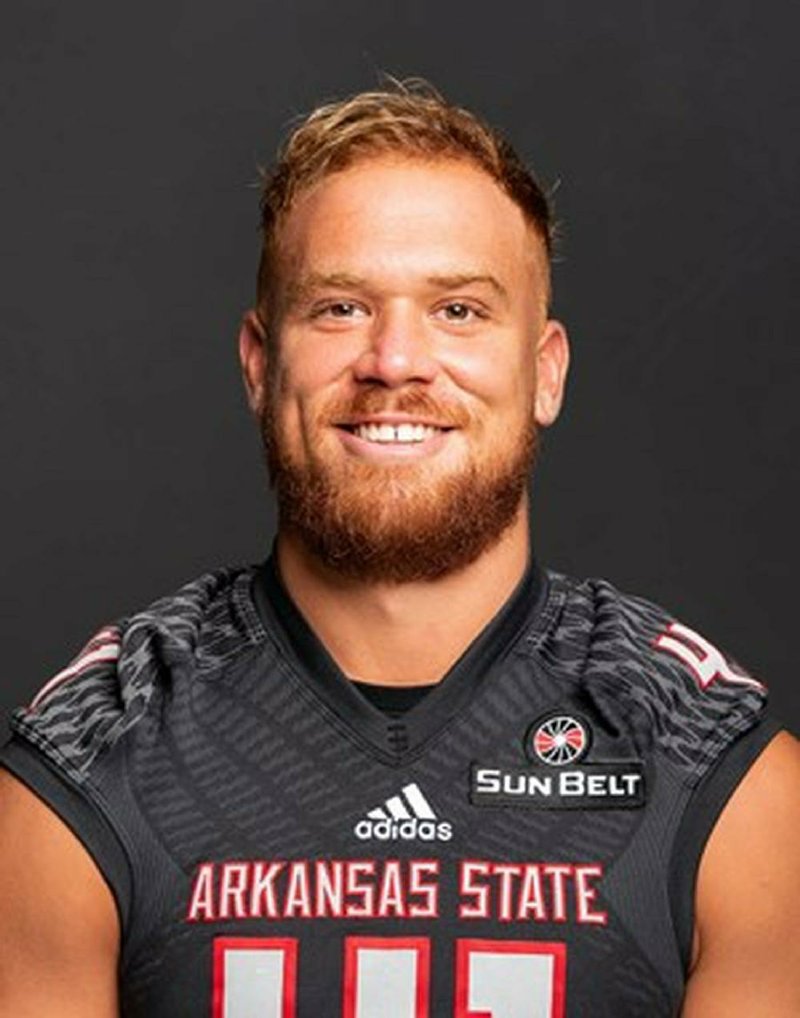 The first American football game that Cody Grace ever found himself in didn't take place when he was a youngster on a peewee field or as a teenager under the lights on a fall Friday night.

It didn't happen until he was 21 years old, playing in front of 90,171 fans at one of the largest, and loudest, college football venues in the country -- Memorial Stadium in Lincoln, Neb.

How's that for a debut?

"I still hadn't understood half the rules of American football," the former Arkansas State University punter and native Australian told the Democrat-Gazette. "All I knew was just catch ball and kick it as far as I can."

That night, on Sept. 2, 2017, against the Nebraska Cornhuskers, Grace's football career officially took off.

Less than three years later, and with three successful seasons at ASU now fully in the rearview mirror, Grace -- who grew up in Perth, the capital city of Western Australia -- is in the midst of preparing for what he hopes will turn into the next step in his football journey -- the NFL.

It wasn't supposed to turn out this way.

This is a man who grew up playing Australian rules football in high school. Three years after graduation, he decided to learn how to become a punter while attending Edith Cowan University in Perth, spending months practicing by himself while reaching out to countless coaches in the U.S. It was all in hopes of landing a football scholarship, so that he could forge a path to one day become a strength and conditioning coach.

"I thought I had a leg on me, but I didn't think I would have something to take to the next level," said Grace, 24. "I realized mid this season I probably could have a shot at going towards the next level. I was just enjoying it and having fun, being that's the main thing as a punter -- you never know when you're going on [the] field. You might be on there once or 10 times. You just got to have fun and enjoy where you are."

The ongoing coronavirus pandemic has thrown a wrench in Grace's NFL preparation, as it has for his former Red Wolves teammates, including wide receivers Omar Bayless and Kirk Merritt.

ASU's pro day, originally slated for March 20, was postponed -- although it's doubtful that it will be made up -- a private workout that Grace had scheduled with an NFL team was canceled, and ASU's weight room inside the team's north end zone facility at Centennial Bank Stadium has closed, all a result of concerns over the coronavirus as the sports world has undergone a shutdown over the last few weeks.

Losing the pro day was the biggest setback.

It's the rare opportunity for NFL scouts, coaches and executives to come to campus and see the school's pro hopefuls work out. For a player like Grace -- whose position is a specialist, who played for a non-Power 5 program and who wasn't afforded the chance to compete in postseason all-star games or the NFL Draft Combine -- any added NFL exposure you can attract is a benefit.

And had the pro day taken place, it could have potentially led to a few more private workouts with teams.

"If what you do live and against another team and you do well, I think they're gonna give you the best shot to prove yourself."

In three seasons at ASU, Grace did plenty to prove he was one of the nation's best punters.

He was a semifinalist for the Ray Guy Award -- which is given annually to the country's top punter -- in 2017 and 2018. As a senior in 2019, Grace was named first team All-Sun Belt for the first time in his career, while ranking tied for first in the league in punt average (44.2 yards per punt) and recording a league-high 22 punts of at least 50 yards, including one that went 75.

"You never worried at all about what Cody was gonna be able to do," ASU Coach Blake Anderson said in February. "I mean he had like two bad punts his entire career here. He knew he was gonna get the job done."

In late February, Grace hopped on a plane and traveled to Phoenix where he participated in a select combine at a local high school for punters, kickers and snappers who had just finished their college senior seasons. The camp -- which is ran by Gary Zauner, a highly regarded kicking coach who spent years in the NFL as a special teams coordinator and a kicking consultant -- gives specialists with NFL aspirations a chance to prove their mettle.

And although NFL scouts and coaches aren't allowed to attend, if you perform well and look the part there, it usually leads to a shot.

Of the 27 punters who attended in February, Zauner said Grace was one of four who he believed could be NFL caliber and thus recommended to scouts and coaches.

Zauner's years of experience coaching specialists make him a valued source for teams from around the league each year when it comes to scouting prospects, and his word has helped numerous players over the past decade land NFL opportunities and contracts.

Last year's "college senior combine" produced two starting NFL punters, as well as a starting kicker and long snapper, during the 2019 season -- including former University of Arkansas-Pine Bluff standout and current Cleveland Browns punter Jamie Gillan -- while helping a total of 11 specialists who participated sign contracts with teams, according to Zauner's website.

Grace wants to be one of the next success stories to have worked with Zauner, but the coronavirus has made the future even more uncertain than it already was before.

With NFL teams not sending their personnel to conduct private workouts and scout at pro days, what a player has already put on film has become increasingly important.

For now, Grace's daily life is consumed with finding creative ways to work out, taking online classes and getting outside and punting. He's set to graduate in August with a degree in exercise science, and his original plan of becoming a strength and conditioning coach will always be there for him.

Punters are not often taken in the draft, and any given season only a few teams at the most are in need at the position.

His NFL odds remain long, but Grace knows all it takes is as much as a camp invite to prove himself.

"It's all about exposure, and just trying to give yourself the best opportunity to have your name put in front of teams," Grace said. "I think I was fortunate enough that I was able to put good film on tape, and just I guess also having that Australian name put to it, it's kind of the market that teams are looking to go into."