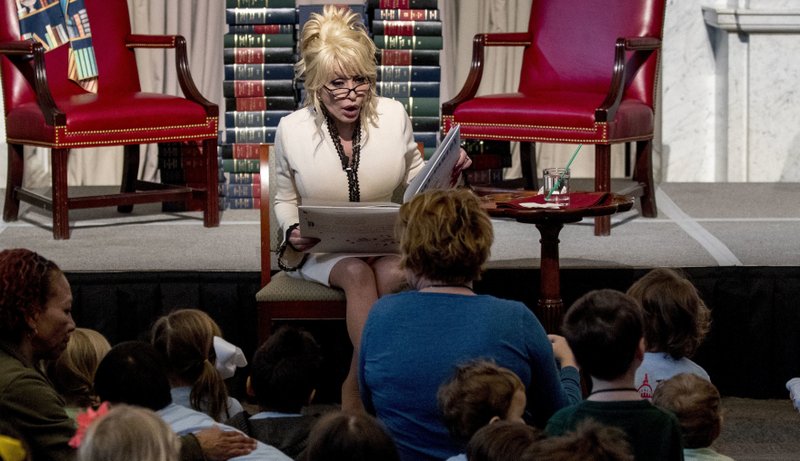 Dolly Parton reads her book &quot;Coat of Many Colors,&quot; to children at the Library of Congress in 2018 in Washington. (AP file photo/Andrew Harnik)

Dolly Parton is reading bedtime stories for children at 6 p.m. Thursdays on Dolly Parton's Imagination Library YouTube channel accessible through Twitter, Instagram and Facebook. "Goodnight With Dolly" began April 2, with The Little Engine That Could.

On April 16 she will read Llama Llama Red Pajama by Anna Dewdney. The other books are April 23, Max & The Tag-Along Moon by Floyd Cooper; April 30, There's a Hole in the Log on the Bottom of the Lake by Loren Long; May 7, the 2016 Newbery Medal winner Last Stop on Market Street by Matt de la Pena, also a 2016 Caldecott Honor Book; May 14, Violet the Pilot by Steve Breen; May 21, Parton's I Am a Rainbow; May 28, Stand Tall, Molly Lou Melon by Patty Lovell and David Catrow; and June 10, Pass It On by Sophy Henn.

A link to each video as well as activity sheets and parenting tips will be at imaginationlibrary.com/goodnight-with-dolly.

According to the website, Dolly Parton's Imagination Library is a book-gifting program that mails free books to children from birth until they begin school, no matter their family's income. Since Parton founded the program in 1955 to serve Sevier County in Tennessee, it has expanded across the nation; it added Canada in 2006 followed by the United Kingdom in 2007, Australia in 2013 and the Republic of Ireland in 2019. It has mailed out about 134 million books and has served 1.6 million registered children.

The Little Engine That Could is the first book the library mails to newly registered children. Watty Piper's classic tale of a determined choochoo was published 90 years ago this year.