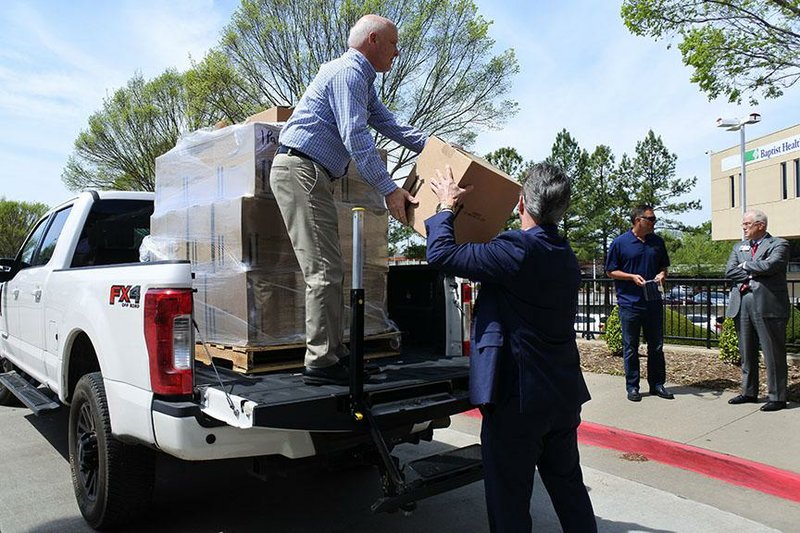 FORT SMITH -- River Valley residents whose lives are affected by the coronavirus were able to obtain considerable nutrition Thursday, thanks to the efforts of a food bank.

Local people lined up in their vehicles outside the front of the River Valley Regional Food Bank to get free poultry and produce. More than 3,200 families were served, according to a news release.

Tyson Foods Inc. in Springdale -- the world's second-largest processor and marketer of chicken, beef, and pork -- donated more than 73,000 pounds of chicken products to the food bank to help ease hunger in west-central Arkansas during the pandemic, according to the news release.

[Video not showing up above? Click here to watch » https://www.youtube.com/watch?v=tok9vXh35cw]

Of that amount, 37,000 pounds was distributed Thursday. Walmart, the world's largest retailer that has its headquarters in Bentonville, donated about 40,000 pounds of produce for the distribution.

Tracy Engel, director of the River Valley food bank, said each person arriving Thursday received a 20-pound box of frozen poultry -- which included fritters, nuggets, strips and breasts -- and a case of produce. Recipients were not required to show identification or fill out any paperwork to obtain those goods.

"We've got ... people that had jobs a month ago that don't have jobs now that never seen themselves in this position, and they've fallen on hard times," Engel said. "They had an income a month ago coming in, their future looked bright, and all of a sudden, this pandemic's hit, and it's just ground everything to a halt. They still have families to feed. They still have rent to pay, utilities. ... They've fallen on hard times, and that's what the River Valley Regional Food Bank's here for."

Thursday's distribution began at 8 a.m. and continued until supplies ran out. In compliance with social-distancing guidelines, it operated in a style reminiscent of a drive-thru, with workers loading items into trunks or truck beds while the recipients stayed in their vehicles.

Engel said some residents were lined up at 4 a.m. Thursday, or even earlier. Demand was so high that morning that Zero Street, where the food bank sits, was heavily congested. At one point, vehicles were backed up for several blocks and police directed traffic.

"No one [had] foreseen this," Engel said. "We called the Fort Smith Police Department yesterday, and they were like, 'Yeah, we'll send a couple of motorcycle officers out.' Well, we have five units out there right now, and motorcycle units."

Thursday's distribution, Engel said, was handled by the River Valley food bank and the Crawford-Sebastian Community Development Council, of which the food bank is a program.

"The produce, I don't think, is as [in short supply] in stores, but the protein surely is, and so we're helping get the protein out," Baker said. "We're making sure we're distributing that to families."

"So I think it's very important now, and I think, going forward with the economy, it looks like we may not bounce out of this very quickly, unfortunately. I wish we would, but this may go long-term. This could be a year or two before we really get back to the way we were."

One of Thursday's recipients was Greenwood resident Ashton Smitley. Smitley said his construction job was shut down about a week ago. The chicken and produce will help him because he is now taking care of his father-in-law, his father-in-law's wife and they are elderly.

"The worst is yet to come, in my opinion, and I'm just trying to prepare, and I believe that everybody needs to prepare," Smitley said.

More giveaways are planned, according to Engel.