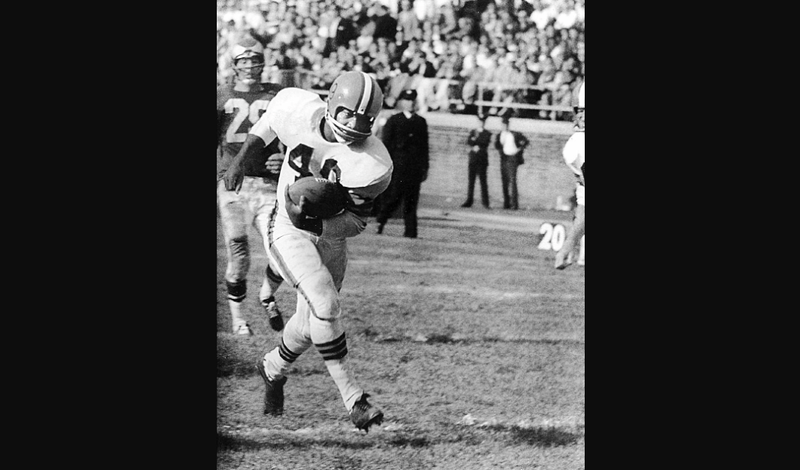 Pro Football Hall of Famer Bobby Mitchell, who played for the Cleveland Browns and Washington Redskins in the late 1950s and early 1960s, died Sunday at the age of 84. Mitchell grew up in Hot Springs and was a multiple-sport standout at Langston High School. (Democrat-Gazette file photo)

The Pro Football Hall of Fame said Sunday night that Mitchell died in the afternoon, according to his family. The Hall of Fame didn't provide other details.

"The entire Pro Football Hall of Fame family mourns the passing of Bobby Mitchell," Hall of Fame President and CEO David Baker said in a statement. "The Game lost a true legend today. Bobby was an incredible player, a talented executive and a real gentleman to everyone with whom he worked or competed against. His wife Gwen and their entire family remain in our thoughts and prayers. The Hall of Fame will forever keep his legacy alive to serve as inspiration to future generations."

Mitchell grew up in Hot Springs and starred in multiple sports at Langston High School which won the 1953 Negro State Football Championship. Mitchell was an All-State Negro Football selection his junior and senior seasons.

After high school, Mitchell played football at Illinois from 1954-57, earning All-Big Ten honors. He was also on the track and field field team for the Fighting Illini, establishing an indoor world record in the 70-yard low hurdles in 1958 with a time of 7.7 seconds, but the record lasted only six days. He later won the Big Ten championship in the 100-yard dash (9.6) and the 200-yard dash in (21.3).

Following his senior year, Mitchell was selected to the 1958 College All-Star Team, which played against the NFL champion Detroit Lions. The Stars beat the Lions 35-19 at Soldier Field in Chicago. Mitchell and Michigan State quarterback Jim Ninowski shared Most Valuable Player honors.

He was drafted by Cleveland in the seventh round of the 1958 NFL Draft. Mitchell spent four seasons with the Browns before being traded to the Redskins in 1961.

Mitchell spent 11 seasons in the NFL. He played halfback for the Browns from 1958-61 and was a flanker for Washington from 1962-68. Mitchell was a three-time All-NFL selection and played in four Pro Bowls.

When Mitchell joined the Redskins in 1962, they became the last NFL team to integrate. He retired from the team with the second-most combined offensive yards.

Mitchell said during a 2015 episode of Showtime's 60 Minutes Sports that he understood pretty quickly upon signing in Washington "there was no one in this town used to having a black star." Friend and fellow Hall of Famer Jim Brown took it a step further.

"Bobby was an individual that was thrown into the arena of being a victim for no reason," Brown said. "He had to suffer for being black more than any person I know that played football at the time I played. with that kind of ability, if he were white, everybody on this earth would know who he was."

After retiring from professional football, Mitchell remained with the Redskins' organization. He became a scout and then was hired as the team's assistant general manager.

"I was extremely saddened to hear the news about the passing of the great Bobby Mitchell," Snyder told NFL.com. "Bobby was a Hall of Fame player and executive and represented the Washington Redskins organization with integrity for over 50 years. His passion for the game of football was unmatched by anyone I have ever met. Not only was he one of the most influential individuals in franchise history, but he was also one of the greatest men I have ever known. He was a true class act and will be sorely missed. Our thoughts and prayers are with his wife Gwen and the entire Mitchell family during this time."

Mitchell was inducted into the Arkansas Sports Hall of Fame in 1977.