WATCH YOUR LANGUAGE! Sit a spell, as I relay a primer on heteronyms 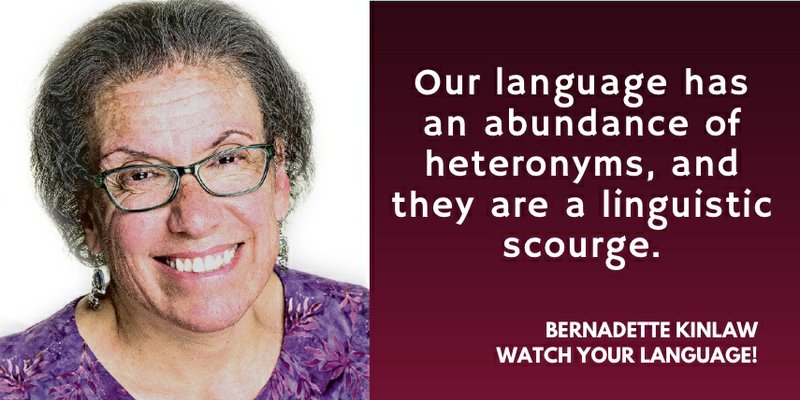 Our language has an abundance of heteronyms, and they are a linguistic scourge.

Heteronyms are words that are spelled the same but have two or more pronunciations, and each pronunciation has its own meaning.

This specificity sounds a lot like records listed in the boundless Baseball Encyclopedia: What's the record for most home runs hit when a man was on second base, the pitcher had red hair and the month was May? Or most stolen bases in the last three innings while the moon was full and it was Thursday?

Often the meanings of the two heteronyms aren't even close. That makes them even crazier.

"Wound" with the "ow" sound is the past tense of wind, as in that thing you did with a watch ages ago. Wound with an "oo" sound is an injury. Shouldn't those pronunciations be reversed? (Let's rally to put the "ow" in the injury word.)

"Slough" is little icky, so I don't use it much. Specifically, the pronunciation "sluff" is the noun for the skin that a snake sheds. Slough with the "ew" sound is a swamp. But one thing I do like about this heteronym is that both pronunciations have expanded meanings. The swamp pronunciation has come to mean moral deterioration or hopelessness. The other is also now something that you discard, such as worries. (I'd love to get a lesson in this.)

And add a word to the snake meaning, and you have "slough off," a slang term meaning to shirk at work.

Why are these kinds of words a scourge? Because the people who are learning English need to remember more than one pronunciation and not one meaning, but two. And sometimes four or five.

GRUESOME OR A WOODSY ANIMAL?

A reader asked for a review of the words grizzly and grisly. These are homophones, words that sound the same but have different meanings and, often, different spellings.

A grizzly is a kind of bear. I love its judgmental scientific name: Ursus arctos horribilis.

"Grizzly" is also an adjective meaning gray or with hints of gray, as maybe a beard. I see that second meaning so infrequently that I sometimes need to remind myself what it means. I would be more likely to describe such a beard as salt-and-pepper.

Snopes, the fact-checking website, found an embarrassing mistake in a headline:

Memphis mom charged in grizzly butchering of 4 of her kids

Presumably, the mother wasn't emulating a brown bear. She was committing ghastly killings. And, as Snopes mentions, this sort of thing is why spellchecking likely wouldn't have helped in this case.

I think I'd add "gristly" to this review. I'm not sure it's a perfect homophone, but it's close. It depends on whether you pronounce the "t." "Gristly" means having gristle, that part of a steak that you really can't chew. I just learned that the gristle is cartilage or tendons of the animal (and I wish I hadn't learned that).

Every once in a while, a reader will ask me about dangling participles or modifiers. You have a dangler when you start off talking about something or someone doing something, and after a comma, your subject miraculously changes. Or, it occurs if you mean to apply a modifier to one word, but it could be interpreted as applying to another.

It's one of the many grammar things that can be funny when used wrong. I tried to find some good ones:

The kind mother handed out bologna sandwiches to all the kids in Ziploc bags. (Did the kids suffocate?)

At the park, I noticed my neighbor was walking her dog in heels. (I guess the dog needs two pairs.)

The robber was in his late 30s and about 6-foot-2, with long, curly hair weighing about 160 pounds. (Time to cut that hair!)

Too many dogs are killed by cars that roam unleashed. (Do leashes come standard with the cars?)

The dealer sold the Ferrari to the buyer with the leather upholstery. (Everyone has his own way of social distancing, I guess.)

Having gathered dust in the storage room for years, I finally get to use my croquet set. (I made the whole family sneeze, too.)

If you see a funny dangler, please let me know. I collect them for perpetual laughter.

Print Headline: Sit a spell, as I relay a primer on heteronyms