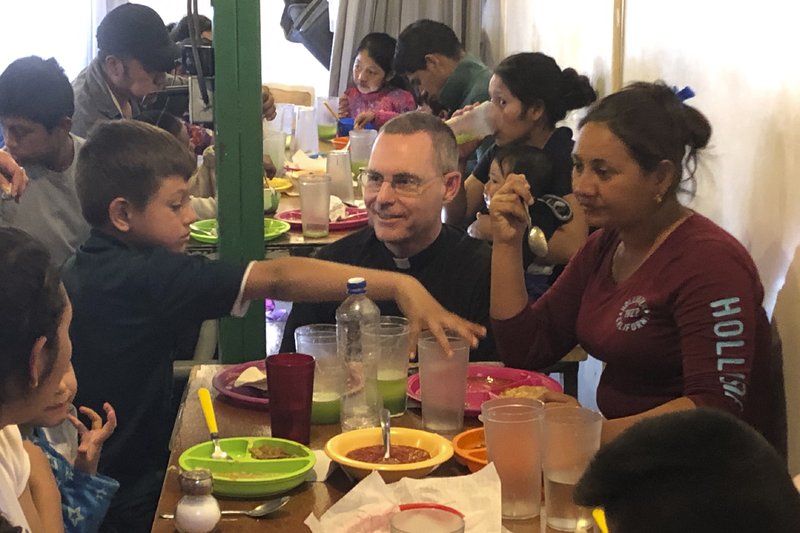 Jesuit priest Sean Carroll meets in February with a group of asylum-seekers in the cafeteria of a migrant-outreach center that his organization, the Kino Border Initiative, operates in Nogales, Mexico, near the U.S. border. (AP/David Crary)

NOGALES, Mexico -- For years, Catholic-led, U-S.-based nonprofits have been at the forefront of efforts to support migrants and asylum seekers along the Mexican border. Tough new border policies, coupled with the covid-19 pandemic, have drastically changed their work, much of which now takes place in Mexico.

The once heavy flow of undocumented border-crossers has dwindled as the Trump administration enforces a new virus-related ban on top of its Migration Protection Protocols that already had forced thousands of asylum seekers to wait in Mexico.

The virus outbreak has prompted one migrant support agency, the Kino Border Initiative, to temporarily close its office in Nogales, Ariz. But it is committed to maintaining operations across the border, where it aids asylum seekers congregating in Nogales, Mexico, after being barred from the U.S.

"There is some resistance to this ministry of migrants and refugees," said Jesuit priest Sean Carroll, who heads the agency. "But our sense of the common good doesn't stop at the border. We're all human beings."

Earlier this year, before the coronavirus gained global attention, Carroll's agency opened a spacious new migrant outreach center just inside the Mexican border. Carroll -- who works full time in Mexico -- hoped to expand a twice-daily meal service that had been offered to hundreds of asylum seekers at a deteriorating cafeteria across the street from the center.

Now, amid worries about covid-19, neither venue is being used as a dining hall. Instead, migrants line up outside the two buildings and approach the doors one at a time to get a meal served into a cup and bowl.

Carroll also has canceled the Masses that were held in the cafeteria and has asked his long-term volunteers to stop reporting for duty, leaving only a small permanent staff. He recently appealed for donors to send hospital masks, rubber gloves, antibacterial gel and other medical supplies.

"We are serving with great courage and diligence in the face of very difficult circumstances," he wrote in that appeal.

There are some similar circumstances for the Hope Border Institute, based in El Paso, Texas, and run by Catholic activist Dylan Corbett.

Across the border in Ciudad Juarez, Mexico, thousands of asylum-seekers have been living in shelters and squalid camps, waiting for a chance to enter the U.S.

Corbett says his agency is trying to find the best ways of supporting those migrants, including some of whom have been denied accommodation at shelters and are now quarantined as a result of covid-19.

"The burden of need has shifted dramatically over to Juarez, yet for a lot of people it's out of sight, out of mind," he said. "There's so much suffering on the other side, but when the eyes of the nation are no longer on the border, it's incredibly difficult."

The Trump administration has justified the new border policy as necessary to minimize the risk of coronavirus exposure in dealings between undocumented migrants and U.S. government personnel.

"We're trying to limit the amount of contact we have with these individuals," said Chad Wolf, the acting secretary of homeland security.

One of the most prominent Catholic migrant-rights activists along the border is Sister Norma Pimentel, who runs a respite center for beleaguered migrants in McAllen, Texas.

At a time when many Roman Catholic dioceses were distracted by financial problems, school closures and ripple effects of the clergy sex-abuse crisis, she became widely known for her passionate advocacy and often traveled to far-flung speaking engagements.

The respite center, which she operates on behalf of Catholic Charities in the Diocese of Brownsville, is far less busy than it used to be.

"Most of the problem has been swept under the rug," said Pimentel. "It hasn't been solved -- just pushed to the other side of the border."

While Pimentel and Carroll are supported by some high-ranking Catholics, they're frustrated that some people in the church give a higher priority to anti-abortion activism than to the migrants' plight.

"We talk about being pro-life, and we're OK returning families to places where they could be killed?" Pimentel said. "We need to hold our fellow Catholics more accountable."