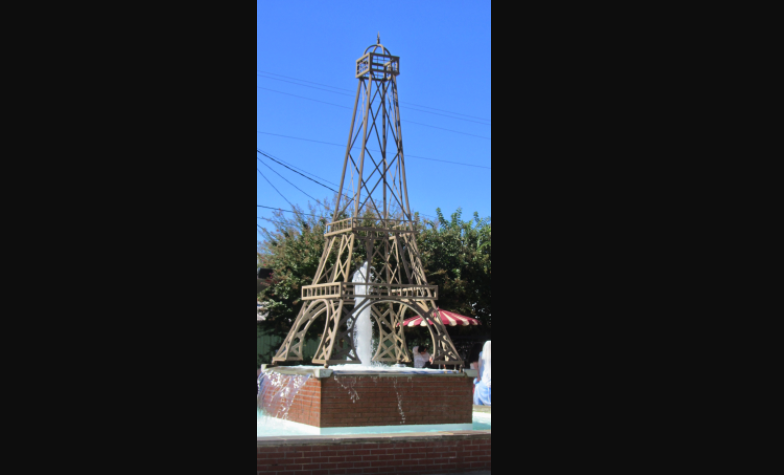 Arkansas Paris, in Logan County, takes pride in its own Eiffel Tower a whimsical mini-model of the world-famous original in France. (Special to the Democrat-Gazette/Marcia Schnedler)

For now, road trips are best taken on the pathways of our minds. Mental magic can transport us, at least in spirit, almost anywhere we choose to roam.

These reveries could waft us to London and Paris — without wandering mentally beyond Arkansas. That's because the Natural State has a bunch of locales bearing the names of famous foreign cities such as the British and French capitals.

For now, as we shelter in place, these dots on the Arkansas map can stir a smile or two while we look forward to a future time when actual road trips make sense again.

London is a good place to begin this fanciful tale, which can be printed out and stashed away for happier days. The Arkansas London, in Pope County just off I-40, was given the name of the British capital in 1877 by its first postmaster. The reason for John McClure's decision remains unclear, according to the Central Arkansas Library System Encyclopedia of Arkansas.

The best-known native of our London is the late Brooks Hays, who served eight terms in the U.S. House of Representatives. A moderate on race relations by Southern standards of the time, he was defeated for re-election by an avowed segregationist in 1958. Now mainly a bedroom community for Russellville, London has slightly more than 1,000 residents.

Arkansas' Paris, population 3,500, celebrates the name it shares with France's capital via a mini-replica of the Eiffel Tower. Erected in 2014 with 5,000 hours of volunteer work, the downtown structure stands 18 feet tall and is enhanced by a fountain. Although just one-fiftieth the height of the French original, it is a source of pride for this Logan County seat, a role it shares with Booneville.

Paris also has a macabre claim to fame as the site of the last judicial public hanging in Arkansas, before the state switched to the electric chair in 1914. The town's Logan County Museum tells about the execution of Arthur Tillman, convicted of murdering his girlfriend. A replica gallows stands outside the museum.

Manila, named after the Philippines capital, is the site of Arkansas smallest state park, dedicated to World War I honoree Herman Davis. (Special to the Democrat-Gazette/Marcia Schnedler)

In the state's northeast corner, Manila is named for the Philippines capital because of a decision to honor Commodore George Dewey's 1898 victory in the Battle of Manila Bay during the Spanish-American War.

A hero of another war is saluted in Manila at Herman Davis State Park. An Army Doughboy who fought the Germans in France, Davis was on Gen. John J. Pershing's list of World War I's 100 greatest combat stories. His life-size statue in the Mississippi County town of 3,300 graces Arkansas' smallest state park.

Havana, population 350, possibly got its name due to a train wreck that took place in Yell County early in the 20th century. It had been called Greenville, but news of the railroad crash caused confusion due to other Arkansas communities with the same name. In the wake of the Spanish-American War, the U.S. capture of Cuba inspired the name change to echo the Caribbean island's capital.

In Nevada County the unincorporated village of Moscow, now shown on maps as Moscow Church near modern day Prescott, is one of at least 19 places in the United States, including two in Arkansas, named for the Russian capital. During the Civil War, an April 1864 skirmish near Moscow brought a tactical Union success during the 1864 Camden expedition.

Connoisseurs of place names can revel in these other Arkansas copycats, many of them quite small and unincorporated: Aberdeen (for a city in Scotland), Athens (Greece), Belfast (Northern Ireland), Berlin (Germany), Carthage (Tunisia), Corinth (Greece), Damascus (Syria).

Close to being the same as their overseas originals but with a blip in the spelling are Sidney (Sydney, Australia) and Tokio (Tokyo, Japan).

Hard to believe all this? Well, you could look it up.

CORRECTION: The April 1864 skirmish that was a tactical success for the Union took place during the Camden Expedition at the village of Moscow in Nevada County. An earlier version of this story gave an incorrect location and definition of the skirmish.