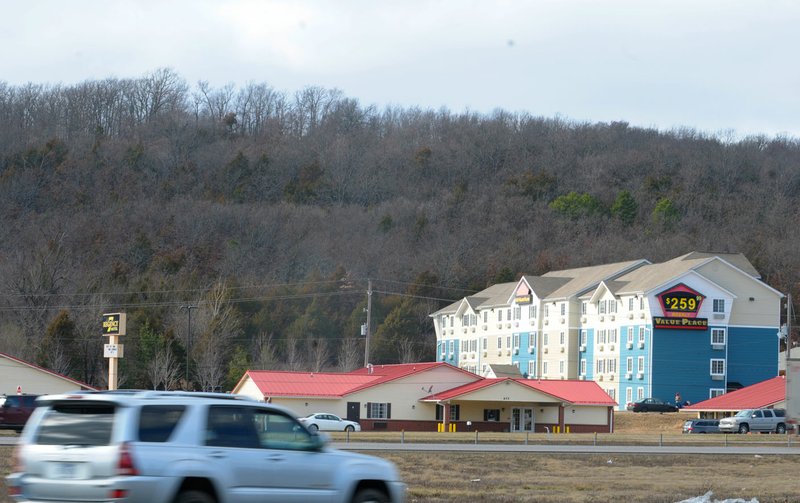 Millsap Mountain is seen looking west over commercial properties on Shiloh Drive and north of Martin Luther King Jr. Boulevard on Feb. 15, 2018, in Fayetteville. The City Council approved projects Tuesday to get going on the first phase of the Centennial Park buildout. (File photo/NWA Democrat-Gazette/David Gottschalk)

FAYETTEVILLE -- The City Council went ahead Tuesday with a few construction projects but held off on other items of interest because of the coronavirus pandemic.

The meeting was held online via the Zoom app.

The next meeting of the Fayetteville City Council will be 5:30 p.m. April 21. To learn how to join online or via phone, go to fayetteville-ar.gov/covid19;

The council OK'd two contracts to build the first phase of Centennial Park at Millsap Mountain.

The first was a $674,281 contract with Northwest Arkansas Trailblazers to build the soft-surface trails weaveing through the nearly 230-acre park west of Interstate 49 and north of Martin Luther King Jr. Boulevard. The second was a $3.1 million contract with Crossland Heavy Contractors to build access roads, a parking lot and turnaround, hard-surface trail, and water and sewer lines at the start-finish area at the top of the mountain.

The site will host the 2022 Cyclocross World Championships. The work approved in the contracts will enable that to happen, along with other events, said Ted Jack, park planning superintendent.

"We're going to have a really special park out there, kind of a one-of-a-kind," he said. "It'll be a great tourist attraction, bringing people into town, but also a great facility for the people of Fayetteville to enjoy."

Money for the project will come from a combination of voter-approved bond issues for parks, trails and streets, along with the city's water and sewer fund. Construction is set to begin this year and wrap in time for the championship event to be held Jan. 29-30, 2022.

The council also approved the last piece of the arterial loop, also known as the Mayor's Box, around the city. A $1.25 million contract with Emery Sapp and Sons will connect a gap in Rupple Road from Tanyard Drive to Weir Road.

The project has a seven-month construction time and should start within a month, City Engineer Chris Brown said. Just more than $1 million will come out of the voter-approved transportation bond fund, with about $216,000 coming from the city's water and sewer fund, he said.

The city will withhold giving raises to city employees for at least three months because of economic uncertainty over the coronavirus pandemic.

The pay plan as proposed would cost about $1.3 million for the rest of the year and $1.8 million for all of next year.

Chief Financial Officer Paul Becker said the city isn't in a position to implement that plan. Administrators won't get an idea of how the coronavirus pandemic has affected sales tax revenue until May or June, he said.

The City Council tabled the proposal indefinitely. Mayor Lioneld Jordan said he wanted to revisit raises in about three months.

"We'll just see where we are," he said. "I just don't feel comfortable right now bringing forth a raise package and not knowing exactly what the economy's going to do. When I do feel comfortable, we'll bring something back."

The city historically has used a combination of growth of sales tax revenue and reserve money to calculate and give annual raises. Sales tax amounts to about 60% of the total revenue in the city's general fund. About 80% of general fund expenditure is personnel cost. The general fund budget for this year is about $48.7 million.

The council also held off on other items of interest. A proposed 10-cent fee on plastic and paper bags at the grocery store will be taken up again during the June 2 council meeting. The council also will revisit changes to meeting procedure, such as limiting public comment from 5 minutes to 3 minutes, at that same meeting. Council member Matthew Petty wanted enough time for the council's ordinance review committee to discuss the issue again before bringing it back to the full council.

A proposal establishing the rules for a pedal carriage, also known as a Pedal Pub, was held on its first reading.