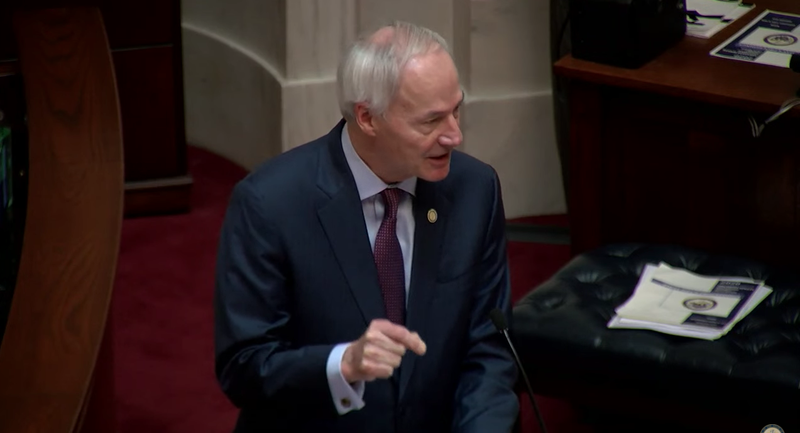 Arkansas Gov. Asa Hutchinson speaks during his State of the State address in Little Rock on Wednesday in this screen grab of video provided by the governor's office.

Governor Asa Hutchinson continued his tradition of opening the Arkansas Legislature’s biennial fiscal session Wednesday afternoon with a State of the State Address, during which he expressed an optimistic tone while detailing the gravity of the situation.

"The honest answer is that our economic condition is uncertain," Hutchinson said. "But the state of our character has never been stronger."

The Legislature gaveled into its biennial fiscal session with lawmakers covering their faces and keeping socially distant as they hoped to wrap up their work on the state budget in record time.

Legislative leaders have said they want to adjourn the session in 10 days, which would mark the shortest fiscal session since the budget-focused proceedings began in 2010.

Hutchinson has already asked lawmakers to trim $205 million from the balanced budget proposal his office put forward in early March, before the outbreak of covid-19 caused a public health emergency and forced the closure of schools, large gatherings and many businesses.

The budget passed at the session will cover fiscal year 2021, which begins July 1.

After Hutchinson’s speech, House lawmakers assembled at a college basketball arena adjourned their meeting for a week. In the meantime, members of the Joint Budget Committee will meet in the hopes of preparing a package of appropriation bills for both chambers to consider.