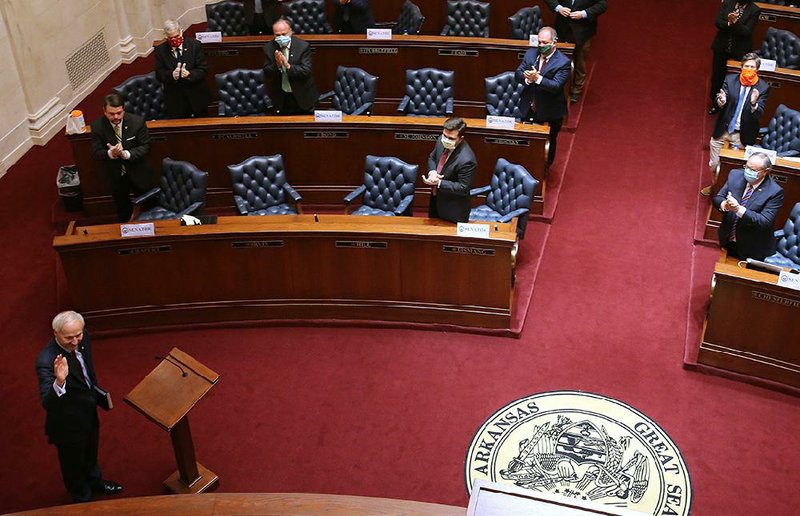 Gov. Asa Hutchinson gets a standing ovation Wednesday after his address in the Senate chamber at the state Capitol. Members of the House, who met at the Jack Stephens Center, watched via live video stream. More photos at arkansasonline.com/49gov/. (Arkansas Democrat-Gazette/Thomas Metthe)

The Legislature's sixth-ever fiscal session started Wednesday in accordance with the law, despite the coronavirus pandemic. The Republican governor delivered a 15-minute speech in the state Senate chamber that was broadcast remotely to the House of Representatives, which is meeting in the Jack Stephens Center at the University of Arkansas at Little Rock.

Most lawmakers wore masks and spread out to maintain the recommended distance between them.

A week ago, the state Department of Finance and Administration, citing an expected recession resulting from the coronavirus pandemic, cut the forecast for net general revenue available to state agencies in fiscal 2021 by $205.9 million, to $5.68 billion. Fiscal 2021 starts July 1.

Before the first positive test for coronavirus in Arkansas, Hutchinson on March 4 proposed a $5.83 billion general revenue budget and setting aside a $54 million surplus for fiscal 2021.

"I submitted my balanced budget, but I need your help to trim it as a result of the revised forecast, which cut our anticipated net state revenue by $205 million for next year," the governor said.

"We will maintain our commitment to funding public education, public safety and Medicaid," he said. "But to do so, we'll need to have some reserve funds with flexibility and oversight to be sure there is no gap in essential services to our citizens."

In the fiscal session, Hutchinson and lawmakers will determine which programs get top priority for general revenue funding. The state's two largest sources of general revenue are individual income taxes, and sales and use taxes.

The Republican-controlled Senate later Wednesday rejected a resolution that would allow the chamber to consider a bill that would delay a tax cut.

In a 5-27 vote, the Senate nixed Senate Resolution 4 by Sen. Linda Chesterfield, D-Little Rock, that would allow the introduction of legislation to delay the reduction of the state's top individual income tax rate from 6.9% to 6.6% -- which took effect Jan. 1 this year -- until 2022 and delay another drop, to 5.9%, to 2023, instead of Jan. 1, 2021. The resolution required 24 votes for approval in the 35-member Senate, which includes 26 Republicans and nine Democrats.

Chesterfield said in her resolution that the delay is needed to improve the state's ability to maintain essential functions and services for Arkansans throughout the ongoing public health emergency.

In 2015 and 2017, the Legislature enacted Hutchinson's individual income tax cuts for middle- and lower-income Arkansans. State officials projected that those cuts would together reduce revenue by about $150 million a year.

On Wednesday, House Democrats also suggested their list of policy goals to combat the coronavirus, which included delaying tax cuts and expanding options for mail voting.

House Democratic leader Fred Love of Little Rock told reporters that the caucus's priorities were pushing for full funding for unemployment insurance and education, and he expected that a measure regarding vote-by-mail will be introduced at some point.

"We want to make sure that we have our unemployment insurance shored up," Love said. "As you know, about 100,000 Arkansans have already filed, and so we want to ensure that that is taken care of."

When asked about the Democrats' aims, House Speaker Matthew Shepherd, R-El Dorado, said "the vast majority of our time is going to be focused in on budget bills."

"Anytime the General Assembly meets and anytime you're talking about spending money, to some degree ... there is a little bit of overlap there," the speaker added.

The House consists of 76 Republicans and 24 Democrats.

In his remarks to lawmakers, Hutchinson said the state has maintained its safety net for Arkansans through public benefits that are important through this difficult time.

"We've continued to invest in economic growth opportunities, and we have not touched our long-term reserve fund of $152 million, because we need those reserve funds for whatever the future brings," he said.

The Legislature's enactment of a 2019 law that consolidated the 42 state agencies into 15 departments, effective July 1, 2019, has meant that the executive branch departments are leaner, more agile and able to respond quicker to unexpected events, Hutchinson said.

Part of the highway plan is a proposed constitutional amendment on the Nov. 3 general ballot that would permanently extend the 0.5% sales tax for highways and roads that was originally approved by voters in November 2012 for a 10-year period.

"And now that we have been challenged by a threat that some compare to the attack on Pearl Harbor or the 9/11 attack, this same General Assembly has responded with a sense of urgency and determination," Hutchinson said.

State government has taken aggressive and unprecedented measures to stop the spread of the coronavirus in Arkansas since he declared a public health emergency in the state on March 11, he said.

"Let me assure every Arkansan that we will do all that is necessary to protect life and to come out of this pandemic with our face looking into the bright days of our future," Hutchinson said.

Hutchinson said the coronavirus has shown that the state needs to continue to invest in high-speed broadband for education and business; and expand the use of telemedicine, and offerings of state services online for the savings and convenience of Arkansans.

"When it comes to higher education, the college atmosphere is so important to the quality of life of a student, but we need to reexamine the needs on our campuses when we see the variety of ways our students learn," he said.

Hutchinson said, "We are not slowing down. We are just pausing out of necessity.

"We will recover quickly and energetically, because we believe in work, entrepreneurship and global leadership," he said.

The effects on the lives of Arkansans trying to avoid the coronavirus brought about economic changes that led the finance department on March 23 to cut the budget for fiscal 2020 -- which ends June 30 -- by $353.1 million, to $5.38 billion. The Legislature then met March 26-28 in a special session to create a "rainy-day" fund with $173.6 million in surplus funds to fill budget holes and unexpected needs linked to the pandemic.

The budget cut in fiscal 2020 is the largest in state government since at least fiscal 1981, according to records in the Bureau of Legislative Research.

In the recession in fiscal 2010, the finance department cut the general revenue budget by $246.9 million, to $4.2 billion, in three separate budget cuts, the bureau's records show.

Hutchinson has attributed the fiscal 2020 cut to projections that the pandemic will lead to reduced tax collections in April through June, and to the state moving the deadline for filing and paying individual income taxes from April 15 to July 15 to match the same move by the federal government.

So far, Hutchinson has tapped $45 million from the covid-19 rainy-day fund with the approval of legislative leaders. That includes $30 million for masks and other protective equipment for health care workers, $13.5 million for ventilators and $1.5 million for a public education campaign by the Health Department.

That leaves $128.6 million in the fund, said Scott Hardin, a spokesman for the state Department of Finance and Administration.

Flowers, who is recuperating, was granted leave by the House and was the only member listed as absent Wednesday.

Shepherd addressed his colleagues' illnesses in his opening remarks to the chamber, saying, "we've seen firsthand how quickly it hits and how slowly it leaves."

Rep. Robin Lundstrum, R-Springdale, provided many of the masks worn by lawmakers in both houses.

Her mother, she said, worked with a dozen of her friends to sew 260 masks in a variety of themes such as Razorback, John Deere, GOP and leopard print.

"There's no excuses for not wearing a mask," Lundstrum told a reporter as she handed one printed on both sides -- one Razorback-themed, the other with animal spots -- to Rep. Denise Garner, D-Fayetteville.

"I couldn't decide between the cheetah and the Razorback," Garner said.

The House and Senate each approved identical resolutions to extend the fiscal session to the maximum of 45 days allowed by the Arkansas Constitution, though legislative leaders have said they want to wrap up by April 17. 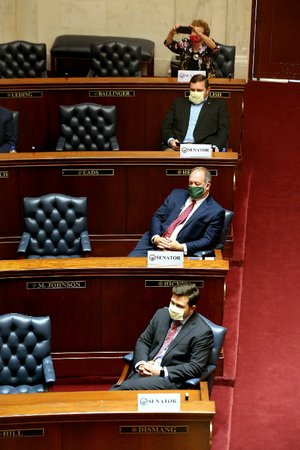 Sen. Jane English (from top) snaps a photo Wednesday while fellow senators Bob Ballinger, Jimmy Hickey and Jonathan Dismang listen to Gov. Asa Hutchinson’s address at the start of the Legislature’s fiscal session. Lawmakers wore masks and kept their distance, with 12 senators and 25 House members voting by proxy. The House met at the Jack Stephens Center at the University of Arkansas at Little Rock. (Arkansas Democrat-Gazette/Thomas Metthe)