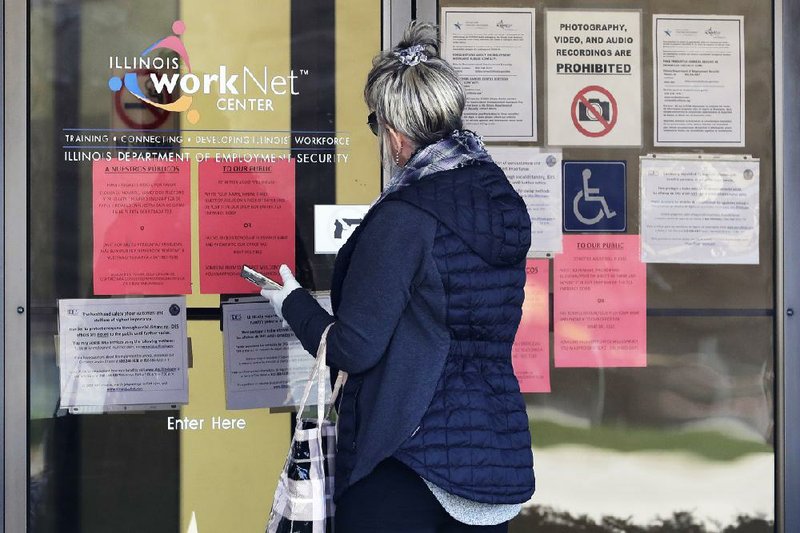 In the fastest surge of layoffs and economic decline in U.S. history, 16.8 million Americans have applied for unemployment benefits in the past three weeks, the government reported Thursday.

A total of 6.61 million people filed jobless claims in the week that ended Saturday, according to Labor Department figures released Thursday, as more states ordered residents to stay home and overwhelmed unemployment offices continue to work through applications.

Economists said the tidal wave of layoffs, triggered by the coronavirus pandemic, suggests the U.S. unemployment rate in April will be 15% or even higher.

The claims filed in the past three weeks are "a mind-boggling 2,500% increase over the pre-virus period," economists at the Economic Policy Institute said.

"For a benchmark, this is as if the entire adult population of Michigan, Minnesota, and Wisconsin applied for unemployment insurance in the last three weeks."

The figures collectively constitute the largest and fastest string of job losses in records dating to 1948. By contrast, during the 2008-2009 recession it took 44 weeks -- roughly 10 months -- for unemployment claims to go as high as they now have in less than a month.

In Arkansas, Gov. Asa Hutchinson anticipates joblessness claims filed in the state since mid-March to reach 150,000 by this weekend. On Wednesday, he said 110,000 jobless claims had been filed in Arkansas during that time period.

The federal numbers lag behind state numbers by a week.

[Video not showing up above? Click here to watch » https://www.youtube.com/watch?v=MF5zD0s-ERc]

Hutchinson didn't address the new numbers during his daily coronavirus update on Thursday except to praise and thank employees of the state Department of Commerce and its Division of Workforce Services as their offices are swamped by claims.

Michael Pakko, chief economist at the University of Arkansas at Little Rock, on Wednesday updated his forecast for the state's economy, taking into account various elements of Congress' coronavirus aid package.

"Job losses are concentrated in service-providing sectors that are considered especially impacted by 'social distancing,"' Pakko wrote, citing the retail and hospitality sectors. "However, the new forecast shows declines across the entire economy. Even health care & social assistance is now expected to see job losses by the end of the year."

Pakko projected consumer spending to be down by more than 9% in the year's second quarter, coupled with a decline in income that will be softened somewhat by Congress' financial aid package.

The damage to job markets is extending around the world. The equivalent of 195 million full-time jobs could be lost in the second quarter to business shutdowns caused by the viral outbreak, according to the United Nations' labor organization. It estimates that global unemployment will rise by 25 million this year. And that doesn't even count workers on reduced hours and pay. Lockdown measures are affecting nearly 2.7 billion workers -- about 81% of the global workforce -- the agency said.

Around half a billion people could sink into poverty as a result of the economic fallout from the coronavirus unless richer countries act to help developing nations, Oxfam, a leading aid organization, warned Thursday.

In the United States, the job market is quickly unraveling as businesses have shut down across the country. The surge of jobless claims has overwhelmed state unemployment offices around the country. And still more job cuts are expected.

Kendall Clark, an information technology recruiter in The Woodlands, Texas, said she had not managed to file an unemployment claim despite more than 1,200 attempts, some at 1 a.m.

"The plan is that we don't pay some bills but pay the mortgage so we don't lose the house," she said.

A nation of normally free-spending shoppers and travelers is mainly hunkered down at home, bringing entire gears of the economy to a near-halt. Non-grocery retail business plunged 97% in the last week of March compared with a year earlier, according to Morgan Stanley. The number of airline passengers screened by the Transportation Security Administration has plunged 95% from a year ago. U.S. hotel revenue has tumbled 80%.

Applications for unemployment benefits are a rough proxy for layoffs because only people who have lost a job through no fault of their own are eligible.

In Georgia, which issued shutdown orders later than most other states, filings for unemployment claims nearly tripled last week to 388,000. In Arizona, they jumped by nearly 50%.

The wave of job cuts may be cresting in some states. Last week, applications for jobless aid declined in 19 states. In California, they dropped nearly 13% to 925,000 -- still a high figure. In Pennsylvania, they dropped by nearly one-third to 284,000. That's still more than the entire nation experienced just four weeks ago.

On Thursday, the Federal Reserve intensified its efforts to bolster the economy with a series of lending programs that could inject up to $2.3 trillion into the economy. Chairman Jerome Powell said that the economy's strength before the viral outbreak means it could rebound quickly in the second half of the year.

Because the widespread business shutdowns that are meant to defeat the virus have never been imposed, economists are struggling to assess the duration and severity of the damage.

A key aspect of the $2 trillion relief package passed by Congress is a $350 billion small-business loan program that is intended to forestall layoffs. Small companies can borrow enough to cover payroll and other costs for eight weeks. And the loans will be forgiven if small businesses keep or rehire their staffs.

The Treasury Department has begun to roll out the loans to mixed results. Many small businesses have had trouble accessing loan applications, and many economists say the $350 billion is insufficient. Treasury Secretary Steven Mnuchin has said he will seek an additional $250 billion for the program from Congress.

Unemployment benefits typically cover less than half a worker's salary, but THE relief package also added $600 a week in unemployment benefits, on top of what recipients receive from their states, including self-employed and gig workers. The Trump administration issued rules Sunday night for states to begin disbursing that extra money, but state officials say it will take time to process all the applications. Many states have not even set up a process yet to handle applications from self-employed workers such as hairdressers and Lyft drivers.

Kandy Thomas, a self-employed dog trainer and animal caregiver in Salt Lake City, found barriers to collecting. The Utah website she checked said that "these benefits are not yet available as we are awaiting further guidance from the U.S. Department of Labor on the process for implementing these programs."

"There's nothing for someone like me," Thomas said. "As soon as you say you're self-employed, you're done."

"This is the first time in 20 years I've had to worry," she said. "I was like, oh, my God, my whole world's falling apart. The first week, I was a mess. I was so depressed, so sickened. But you can't worry about what you can't control. I'm strong, and I always have been."

Information for this article was contributed by Christopher Rugaber of The Associated Press; by Don Lee of the Los Angeles Times; by Patricia Cohen and Tiffany Hsu of The New York Times; by Heather Long and Andrew Van Dam of The Washington Post; and by Stephen Steed of the Arkansas Democrat-Gazette.