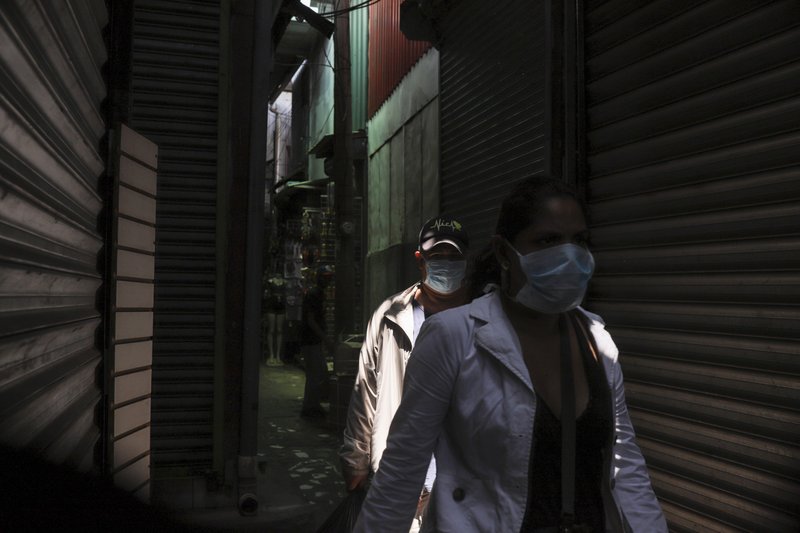 People, wearing protective face masks, make their way through a popular market in Managua, Nicaragua, Tuesday, April 7, 2020. Restaurants are empty, there's little traffic in the streets and beach tourists are sparse headed into Holy Week despite the government's encouragement for Nicaraguans to go about their normal lives. (AP Photo/Alfredo Zuniga)

MANAGUA, Nicaragua -- International health officials are warning that the Nicaraguan government's weekslong refusal to take measures to control the spread of the new coronavirus is heightening the risk of an epidemic in Central America even as neighboring countries take action.

President Daniel Ortega's government urged Nicaraguans to party during Carnival celebrations, and it has said that people should keep attending sports events and cultural festivals, and pack the country's beaches during Holy Week vacations this week.

Doctors have been told not to alarm patients by wearing masks or using sanitizing gel. Before schools closed April 3 for an extended vacation, principals had threatened to expel students who missed class, and last month a third baseman was banned from professional baseball for three years after he asked to stop playing over virus fears.

Ortega's administration has offered no detailed explanation for its refusal to take widely accepted measures. But the health minister has spoken of the need to support the economy, badly damaged by two years of anti-government protests and harsh crackdowns on dissent. Some analysts say Ortega and his circle may fear that anti-virus measures would weaken their hold on power.

In the meantime, Nicaraguans are doing what they can to voluntarily stay away from one another. But the Pan American Health Organization's director, Dr. Carissa Etienne, warns that Nicaragua's lack of official measures is increasing the risk of an epidemic.

The president of neighboring Costa Rica, Carlos Alvarado, has warned that an out-of-control epidemic in Nicaragua would have consequences for all of Central America. In mid-March, Costa Rica, El Salvador and Honduras closed their borders to foreigners and instituted social-distancing measures.

There are also concerns about Ortega's own health. The 74-year-old has not appeared in public for three weeks. Although he has been absent for long periods in the past only to reappear, his disappearance during a global pandemic is fueling rumors he may be ill, or personally terrified of the coronavirus.

"The broader problem in Nicaragua is that you have a dictatorship that is unable to take the pandemic seriously. It's unable because they're distracted by the health itself of its president," said Manuel Orozco, a Nicaragua expert at the Inter-American Dialogue in Washington.

The country's economic crisis -- and resulting lack of revenue -- also means the state's ability to act is very limited, he said.

The government insists the country has only three confirmed cases of the virus, all imported, even as its borders remain open and infections steadily increase in neighboring countries. Costa Rica has more than 400 confirmed infections, Honduras has over 300 and El Salvador reports around 100. Cuba's Health Ministry has said two people arrived sick from Nicaragua and a third person tested positive this week after returning from Nicaragua.

"Nothing indicates that the problem that Spain, Italy and the United States have won't repeat itself in Nicaragua, too," said an epidemiologist, Dr. Leonel Arguello.

Information for this article was contributed by Alexis Triboulard of The Associated Press.