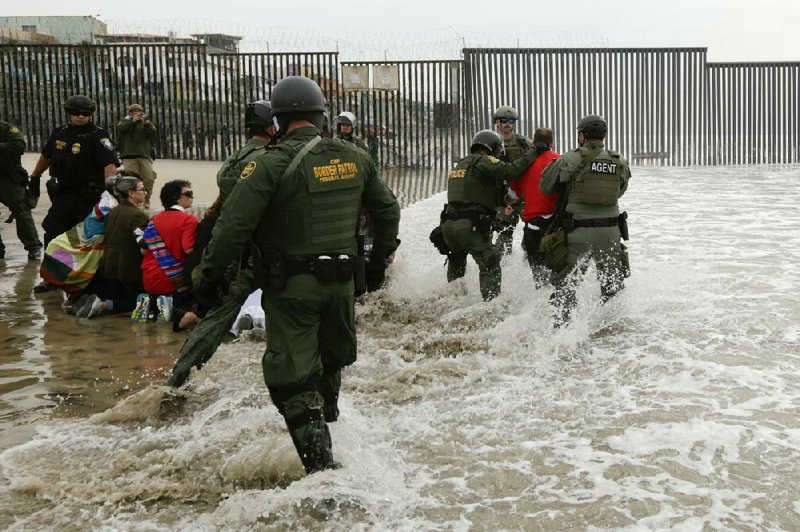 Border Patrol agents (right) detain a man during a protest in San Diego near the border with Tijuana, Mexico, in 2018. (AP/Gregory Bull)

A U.S. Border Patrol agent wouldn't let Jackeline Reyes explain why she and her 15-year-old daughter fled Honduras and needed asylum, pointing to the coronavirus.

"The agent told us about the virus and that we couldn't go further, but she didn't let us speak or anything," said Reyes, 35, who was shuttled on March 24 to Reynosa, Mexico.

The Trump administration is relying on a seldom-used public health law to set aside decades-old national and international immigration laws. People seeking refuge in the U.S. are whisked to the nearest border crossing and returned to Mexico without a chance to apply for asylum.

U.S. Customs and Border Protection said Thursday that nearly 10,000 Mexicans and Central Americans have been "expelled" to Mexico since the rules took effect March 21. Mark Morgan, the agency's acting commissioner, said the changes were "not about immigration."

"What's happening right now is a public health crisis driven by a global pandemic, which has resulted in a national emergency declared by this president to protect the health and safety of every American in this country," he told reporters.

Mexico is providing support, agreeing to take migrants from Guatemala, El Salvador and Honduras, who accounted for well over half of all U.S. border arrests last year.

The Trump administration has offered little detail on the rules, which haven't been challenged in court. It went public March 20, the same day Trump announced at a news conference that the southern border was closed to nonessential travel.

The administration tapped a law allowing the head of the Centers for Disease Control and Prevention to ban foreigners if their entry would create "a serious danger" to the spread of communicable disease. The U.S. has the most confirmed cases in the world. CDC director Dr. Robert Redfield issued a 30-day order and said he may extend it.

"The administration is able to do what they always wanted to do," said Aaron Reichlin-Melnick, policy counsel for the American Immigration Council, which has criticized the administration. "I don't see this slowing down."

Mexico said it won't take unaccompanied children and other "vulnerable people." Carlos Gonzalez Gutierrez, Mexico's consul general in San Diego, said that includes people who are over 65, pregnant or sick.

The U.S. also is returning Central American children who travel with grandparents, siblings and other relatives, said a congressional aide who was briefed by Customs and Border Protection officials and spoke on the condition of anonymity because the information was not intended for public release. Previously, children who weren't with parents or guardians were considered unaccompanied and automatically put into the asylum pipeline.

The health risks of holding migrants in crowded spaces like Border Patrol stations is "the touchstone of this order," Redfield wrote. He said exceptions to immediately expelling someone can be considered but didn't elaborate.

"If someone is deemed to have the appropriate level of fear, those will be processed on a case-by-case basis," Morgan, the CBP acting chief, said Thursday.

An internal Border Patrol memo obtained by ProPublica offers some detail on exemptions: An agent who determines that a migrant claims a "reasonably believable" fear of being tortured can be referred for additional screening under the U.N. Convention Against Torture, a lesser form of asylum that's harder to qualify for.

Matthew Dyman, a CBP spokesman, declined to comment on the memo this week.

"Obtaining and posting leaked information is a great way to degrade trust and communication between CBP and the media," he said.

Under the rules, agents take migrants to the nearest border crossing in specially designated vehicles and avoid stations, minimizing the risk of exposure to the virus. Those not sent to Mexico are flown to their home countries.

Information for this article was contributed by Astrid Galvan, Nomaan Merchant and Elliot Spagat of The Associated Press.