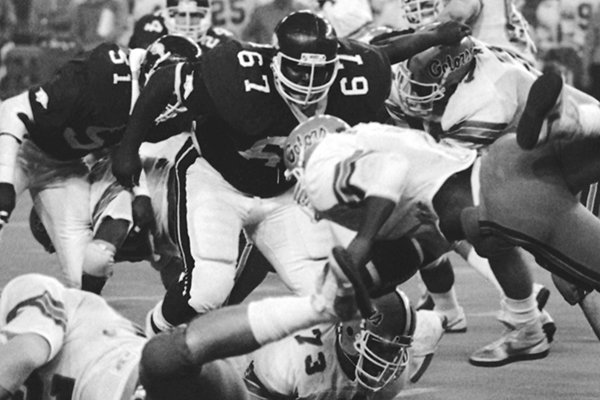 Arkansas defensive lineman Richard Richardson (67) closes in on Florida running back Lorenzo Hampton (7) stretches for a yard in the fourth quarter of the Bluebonnet Bowl game in Houston on Friday, Dec. 31, 1982. (AP Photo)

FAYETTEVILLE -- As a center on the University of Arkansas football team, Jay Bequette went against some of the top defensive lineman in the country, including Texas' Kenneth Sims, SMU's Michael Carter and Texas A&M's Ray Childress.

Bequette said none of those college All-Americans who had lengthy NFL careers were tougher to block than Richard "Doughnut" Richardson, who he faced in practice for four seasons from 1979-82.

"Doughnut was right up there with those guys," Bequette said. "Man, he was tough. Hell of a player and a hell of a guy."

Richardson, a four-year starter at nose guard for Arkansas who earned All-Southwest Conference first-team honors in 1982, died on Thursday in his hometown of Little Rock. He was 60 years old.

According to a Pulaski County coroner's office report, Richardson tested positive for covid-19 after being admitted to Baptist Medical Center on Monday in respiratory distress. He died in the intensive care unit.

"A lot of people are hurting right now hearing this news about Richard," said Harold Horton, who was Richardson's defensive line coach at Arkansas in 1979 and 1980. "Richard was well-liked and well-respected by everyone. He'll be greatly missed."

Richardson starred at Little Rock Central before signing with the Razorbacks. As a senior, he helped the Tigers win the 1978 Class 5A state championship.

"Richard was the epitome of a young man that loved the game and was the most coachable kid you could ever be around," said Bernie Cox, Central's head coach for 35 years from 1975-2009. "His two favorite words were, 'Yes sir.'

"He had great strength and he had quickness. I loved him at nose guard because he knew how to get low and he could explode upward so fast. He could get underneath a center, and I guarantee you that guy would be back on his heels in about three seconds."

Cox said Richardson lived right by Quigley Stadium -- where the Tigers played -- and endeared himself to the Central coaches as a youngster by frequently stopping by practices.

"Richard was in the seventh or eighth grade, and he started hanging around all the time," Cox said. "That was fine because he was a great kid, very polite."

When the coaches met on a Saturday to review the previous night's game film and begin preparing for the next opponent, Richardson sometimes would visit and eat a doughnut or two from the dozens that Cox brought into the office.

Clyde Horton, an assistant football coach and head track coach for the Tigers, nicknamed Richardson "Doughnut" and it stuck.

Richardson, 5-11 and 260 pounds, had 253 career tackles for the Razorbacks, including 24 behind the line of scrimmage for 128 yards in losses. He also had 3 career fumble recoveries, 2 interceptions and 3 pass breakups.

As a senior, Richardson was among four co-captains for the Razorbacks and had 80 tackles with 7 for losses of 48 yards.

"Doughnut was short, but he was quick and strong, violent and a really smart player, too," Bequette said. "He knew our line calls and snap counts better than a lot of our offensive linemen did.

"He'd be real calm, and then the ball was snapped and he turned into a maniac. You couldn't get your hands on him."

Cox said that during Richardson's junior and senior seasons at Central, he became so dominant that the coaches often had to put him on the sideline in practices so the offense could run its plays.

"Richard didn't like being taken off the field," Cox said. "But I told him, 'We already know how good you are, and we've got to get in some work on offense.'

"In practice, our guys knew if they faced Richard, they'd better buckle that helmet up, because there was no such thing as half-speed for Richard. He always gave 100% and expected others to do that.

"You never had to raise your voice to Richard. He would just play in practice like he was going to play on Friday night. He set an example every snap."

Limbo Parks started for Arkansas as an offensive lineman in 1985 and 1986 as a junior-college transfer after Richardson's playing career had ended, but the two became good friends.

"I saw Doughnut play for Arkansas in 1982, and I just fell in love with his tenacity," Parks said. "When I came here in 1985, he didn't know me from a paint can, but Doughnut would come back to campus to visit sometimes and we just hit it off. Sometimes he'd stay in my dorm room. He was like royalty to me.

"We all loved that dude. He was the epitome of a friend. He really cared about people."

Richardson was the treatment coordinator at the Hoover Treatment Center in Little Rock.

"Doughnut went through some personal stuff with addiction, then he got totally clean and became an addiction counselor working with young people," Bequette said. "He really turned his life around."

Cox said there never was any doubt Richardson would accept a scholarship offer from Arkansas.

Other major football programs sent letters about Richardson to Cox, he said, but Richardson wasn't interested.

"After I got some letters to give to Richard from colleges wanting him to visit, I saw him at lunch," Cox said. "I called him over and I said, 'I've got some letters for you. You're getting to be popular with these college coaches. They want to talk to you.'

"He said, 'Coach Cox, I don't want those letters. Get rid of them. If I ever get the chance, I'm going to be a Hog. So I don't want to see letters from anyone else.'

"I coached 44 years in high school, and we had some great players, but none of them had a better heart or cared more about the game of football and his teammates than Richard Richardson.