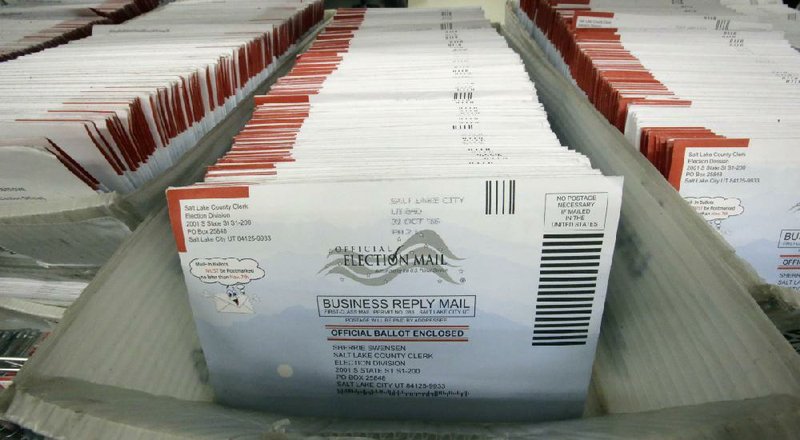 Mail-in ballots, like the ones used in Utah in 2016, are more and more being seen as a reasonable alternative to in-person voting in November. (AP/Rick Bowmer)

President Donald Trump is claiming that expanding mail-in voting will increase voter fraud. But several GOP state officials are forging ahead to do just that, undermining one of Trump's arguments about how elections should be conducted amid the coronavirus outbreak.

While Trump has complained that voting by mail is "ripe for fraud," Republican state officials in Iowa, Ohio and West Virginia have all taken steps to ease access to mail-in ballots, following health officials' warnings that voting in person can risk transmission of the deadly virus. Nebraska's Republican governor urged voters to apply for absentee ballots. Florida's GOP chairman says the party will continue to run a robust vote-by-mail program.

Before the coronavirus hit, many in the GOP had warmed to mail-in voting, agreeing that it can be conducted without fraud and even used to their political advantage.

The most prominent recent fraud case occurred in North Carolina's 9th Congressional District in 2018, when a consultant hired by the GOP candidate was linked to an effort to tamper with absentee ballots.

Trump himself requested a mail ballot for Florida's GOP primary last month and he has voted absentee in previous elections. Still, this week he said "mail-in voting is horrible, it's corrupt," and the Republican National Committee moved to help state parties block expansion of the franchise. The effort was most notable in Wisconsin, where thousands of voters were forced to wait in long lines after the conservative majority on the state's Supreme Court prevented the Democratic governor's last-ditch attempt to delay the election.

Iowa is mailing requests for absentee ballots to all 2.1 million registered voters ahead of special elections in July. Republican Secretary of State Paul Pate described the move as a reaction to "an emergency," adding: "You need to have some flexibility."

In Ohio, Gov. Mike DeWine and Secretary of State Frank LaRose, both Republicans, this week urged the state's voters to cast ballots via mail in the April 28 primary. The contest was shifted to virtually all-mail last month as the virus outbreak worsened.

Nebraska Gov. Pete Ricketts, a Republican, is urging all voters to request absentee ballots for next month's primary.

In West Virginia, voters are receiving applications for mail ballots for the state's upcoming primary. On Thursday, the state's Republican secretary of state, Mac Warner, told reporters he agrees with Trump that "voting by mail just opens up opportunity for fraud," but said he believed his state has necessary safeguards.

In Florida, where Republicans have dominated mail-in voting, state GOP chairman Joe Gruters also agreed with Trump that the state couldn't entirely vote by mail. But he added: "The Florida GOP will push vote-by-mail requests and returns among Republicans."

New Hampshire Gov. Chris Sununu, a Republican, announced Thursday that the state will allow voters to cast mail-in ballots in the November general election if the coronavirus is still a factor this fall.

Sununu said the state is considering other voting alternatives, too, including "drive-up voting," in which a voter would not have to leave his vehicle.

Results are expected today in the party-run primary, which became an exclusively vote-by-mail affair after concerns with covid-19 scrapped plans for in-person voting sites and pushed back the original primary date of April 4.

There are eight names on the ballot, reflecting the roster of candidates when the ballots were printed. The party plans to tabulate results on a rank-choice ballot for Biden, U.S. Sens. Bernie Sanders and Elizabeth Warren, U.S. Rep. Tulsi Gabbard and the option of undeclared. Sanders, Warren and Gabbard have suspended their campaigns but asked to be included in the tallies, state party Chairwoman Casey Steinau said.

Alaska Democrats moved from their traditional caucuses to a primary for this year's race in a move Steinau said was aimed at increasing participation. As of Thursday morning, the party said it had received about 19,000 ballots.

Information for this article was contributed by Julie Carr Smyth, Becky Bohrer and Bobby Caina of The Associated Press; and by Colby Itkowitz and Amy Gardner of The Washington Post.