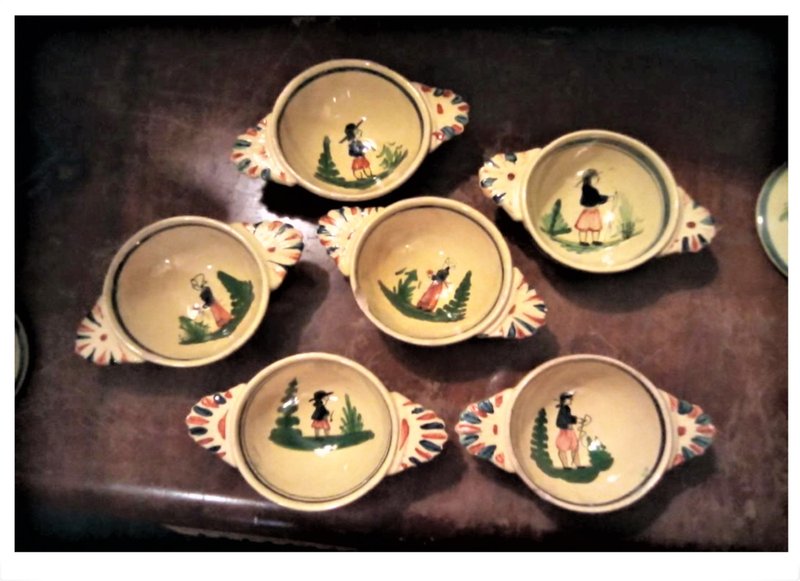 Walls may have "ears," and bowls can have them too. (Handout/TNS)

DEAR HELAINE AND JOE: I have inherited six covered bowls that are marked "HB" with "Quimper, France" below. What can you tell me about them and their value? Some pieces are in better condition than others because I was using them before I realized they may be more valuable than I thought.

DEAR D.H.: Without covers, these are called "bols a oreilles," or bowls with ears. Americans tend to call them lug-handled soup bowls, but that is far less romantic-sounding.

They were intended to be used for serving hot cream soups, but we have seen it suggested they may have been designed for serving the famous "French onion soup." However, the lid on these pieces makes this a bit impractical because the cheese that normally floats on top would often stick to the lid and made a mess.

The vessels in today's question were made in the French town of Quimper (pronounced Kem-pair), which is in the Brittany region. The town, almost 400 miles northwest of Paris, has a long history that can be traced back to Roman times. Early on, when it was the capital of the region then known as Cornouaille, it was called Corspotium.

Its inhabitants were Celts, who fled Cornwall in England when the Anglo-Saxons invaded (Cornouaille, incidentally, is French for "Cornwall"). Quimper is said to have been founded by King Gradlon (born 330 A.D.), had its own Christian bishop by 495 A.D. and became the capital of the counts of Cornouaille.

The town of Quimper is known for its faience pottery, which is earthenware covered with a glaze that contains tin oxide. This so-called tin-glazed pottery has much in common with Dutch Delft, Italian Majolica and other tin-glazed earthenwares made in countries such as England, Spain and France. Each piece of Quimper pottery is hand-painted, which makes each piece unique.

There were three major potteries in Quimper making this ware, but we want to focus on Jean-Baptiste Bousquet, who began making pottery in the Locmaria district of Quimper in 1690. When Bousquet died, his eldest son, Pierre, inherited the factory and moved it to an imposing building overlooking the Odet river. The firm gradually acquired the name The Grand Maison.

The enterprise passed through the family until a son-in-law named Antoine Joseph Jean de la Hubaudiere took over and the pottery became known as The Grand Maison -- HB (for Hubaudiere/Bousquet). The "HB" mark began appearing on the company's wares around 1860, the word "Quimper" was added about 1895 and "France" was added in the early 20th century.

Up until 1942, dots, dashes and other Morse code-type symbols were added as painter's signatures, and these appear to be present on D.H.'s pieces. We believe the pieces in the Petit Breton and Petit Bretonne pattern were made between about 1920 and 1940 and have a retail value in the $450 to $600 range. Any unsightly damage could reduce the price by half or more.