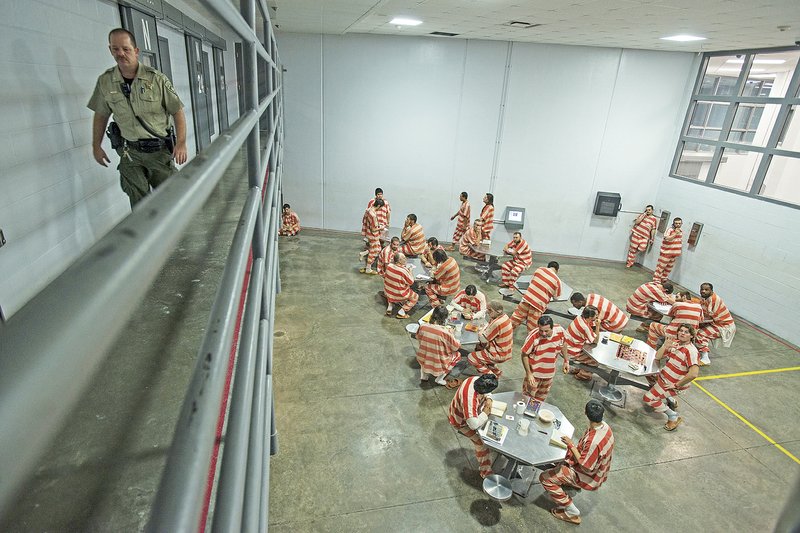 Inmates spend time in dayroom in 2014 at the Washington County Detention Center in Fayetteville. Overcrowding in pods forces some inmates to sleep on extra mats on the floor. (File photo/NWA Democrat-Gazette/Anthony Reyes)

FAYETTEVILLE -- Washington County continues to reduce the number of prisoners in the jail, having obtained state approval to release 33 prisoners who were serving 90-day terms for parole violations.

Chief Deputy Jay Cantrell said the county was holding as many as 56 people who were sentenced to 90 days in the jail for parole violations. After serving those sentences, the parolees were to be released on parole.

Cantrell said 25 had been released as of Friday and three were transferred to other jurisdictions where they face additional charges. He said the Sheriff's Office was working to release the remaining five.

The Sheriff's Office has been trying to reduce the jail population to minimize the risk of the covid-19 coronavirus spreading among the inmates and staff. Working with Prosecutor Matt Durrett and the county's circuit judges, the Sheriff's Office has released about 150 inmates under an electronic monitoring program.

Kelly Cantrell, public information officer for the Sheriff's Office, said Friday six employees and one detainee have been tested for the virus and all of the test results were negative.

The release of the parolees reduced the jail population to 380 on Friday. Sheriff Tim Helder said when the jail opened in 2006, 240 inmates were moved from the old county jail to the new jail. Helder said the number exceeded 380 "within two months" of the facility opening and has been above that number since. The jail has a design capacity of 710 beds. The detainee population reached a high of 810 on Feb. 10.